Eagles vs. Giants: By the Numbers

Paul Domowitch takes a deep dive into the unique way Jalen Hurts is succeeding at the QB position. 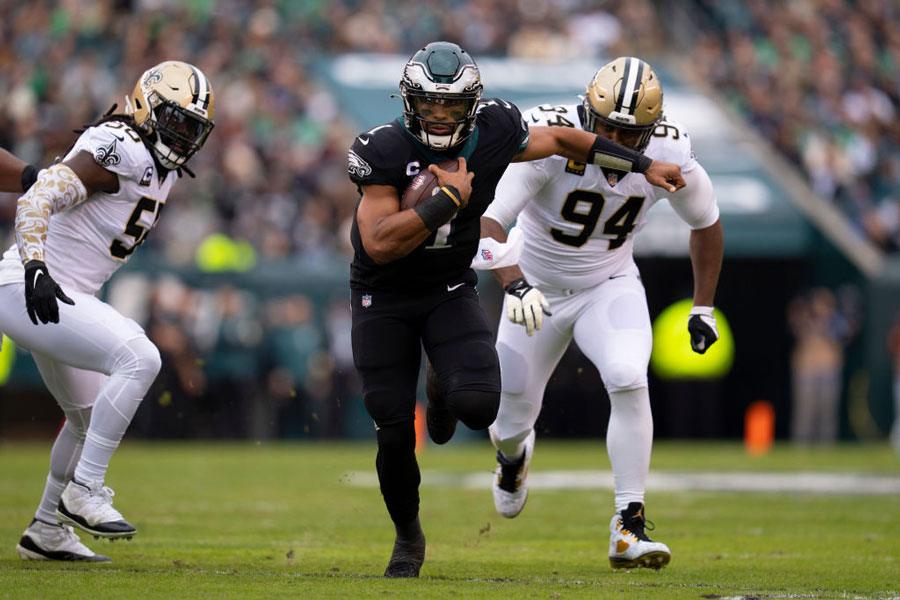 One of the best things he’s done passing-wise actually is something he hasn’t done. He hasn’t turned the ball over. He is tied for sixth in interception percentage (1.6) with just five picks in 320 attempts and has lost just one fumble in the Eagles’ first 11 games.

Where Hurts has made a dramatic difference this season, however, has been as a runner. He heads into Sunday’s important division game against the Giants ranked ninth in the league in rushing (618 yards), third in rushing first downs (45), fourth in runs of 10 yards or more (22), and fifth in rushing touchdowns (8).

In last week’s 40-29 win over the Saints, Hurts became the first quarterback in franchise history to record three rushing touchdowns in one game. He needs just two more to match Michael Vick’s season record for rushing TDs by a quarterback (10) and could make a run at Cam Newton’s NFL record (14).

The Eagles have had the league’s most dominant rushing attack the last four weeks. They’ve rushed for 870 yards in wins over the Lions, Broncos, and Saints and a three-point loss to the Chargers. Hurts has 257 of those yards. They’ve amassed 58 rushing first downs in those four games. Hurts has 20 of those, including seven last week against the Saints – six on third down.

Hurts has 114 rushing attempts in the first 11 games. That’s the 21st most carries in the league and puts him on pace for 176 carries in this, the NFL’s first 17-game season. That would tie the league record for rush attempts in a season by a quarterback, set by the Ravens’ Lamar Jackson in 2019. Jackson, though, is on pace for 180 carries himself.

But Nick Sirianni flipped the script in Week 8 and became more run-based. The Eagles have averaged 43.5 rush attempts per game the last four weeks. Their run-play percentage in those four games has skyrocketed to 66.9. Hurts’ pass-attempt average the last four weeks has dropped to a much more manageable 19.5.

While Hurts’ pass attempts have gone down, his rush attempts have gone up. He has averaged 12 carries per game the last four weeks, up from 9.4 in the Eagles’ first seven games. Is that sustainable for a quarterback, even one who’s built like a fullback? I guess we’ll find out.

DEFENSE GETTING OFF TO BETTER STARTS