Hall of Fame quarterback Peyton Manning took an interest in the Eagles signal-caller when Jalen Hurts was in high school. 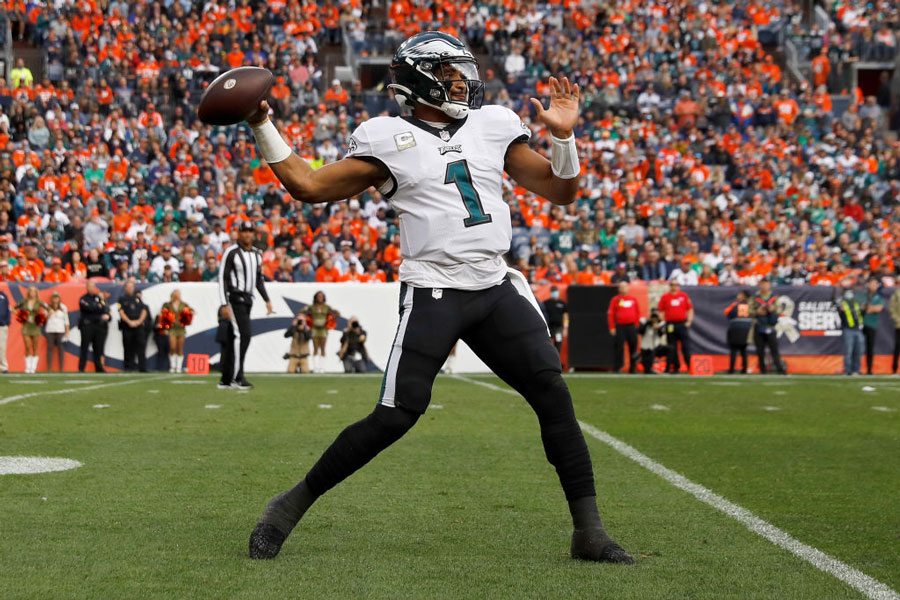 Jalen Hurts throws the ball during the first half against the Denver Broncos at Empower Field At Mile High on November 14, 2021. / Photograph by Justin Edmonds / Stringer via Getty Images

The “Manning Cast” has become all the rage during “Monday Night Football” this season.

While the casual fans turn on ESPN to watch the stand-alone game, the diehards want to hear what Peyton Manning, his little brother Eli, and their stream of big-time guests have to say about the action happening on the field during the alternate telecast that airs on ESPN2. Think of it as a live director’s cut where the comments are all off-the-cuff and immediate.

One day you might even see Eagles quarterback Jalen Hurts as a guest on the show.

During his weekly press conference on Wednesday, Hurts casually dropped that Peyton often sends him video cut-ups in an effort to help the 23-year-old second-year quarterback continue his evolution as a player.

“I love watching Peyton Manning and seeing what he has to say [in] the detailed episodes that he makes,” Hurts said. “He actually sends them to me. Having a relationship with him, I enjoy that.”

The relationship began when Hurts went to a Manning football camp as he prepared for his sophomore season at Channelview High School in Texas.

“I’ve always had a good relationship with the Mannings,” Hurts said. “Mr. Arch, Archie, Peyton, Eli. … Always, little things I can learn from, pick their brain. I value that.”

“I value the Mannings and the relationship that I have with them.”

It’s the relationship with Peyton, the two-time Super Bowl-winning Hall of Famer who is on the shortlist of greatest QBs of all time, that has evolved the most over the years.

Defined by his legendary attention to detail as a player, Peyton evidently carries that over to other aspects of his life, whether that’s preparing for his television duties or paying it forward to young QBs like Hurts he’s forged relationships with.

“He’s just really, really detail-oriented,” Hurts said when discussing Manning. “Very detailed. You talk about doing walkthroughs, he’s a guy that everything was really full speed until the snap.”

Ironically the Eagles were preparing for a walkthrough practice Wednesday and Hurts’ current coach, Nick Sirianni, expressed a similar sentiment to Manning’s.

“We’ll be walkthrough today,” Sirianni said. “The reason I’m even bringing that up is because the message is that we’re not going to be out there running around and moving around, but we need to make sure we’re getting better in the sense of let’s make sure we’re mentally ready to go here.”

Many have called Manning the most cerebral QB ever, a coach on the field who often ran his offenses in Indianapolis and Denver from the line of scrimmage.

“Even in the offseason, the amount of detail he has in the offseason when he’s with his receivers. He had scripted plays out there. He had special routines. I admired that,” Hurts said of Manning. “I hope to continue to carry that on.”

Hurts has started to turn the corner with the Eagles’ move away from an RPO-heavy scheme to a more traditional attack built on running the football and play-action off of that.

“You can see him stepping up in the pocket,” said offensive coordinator Shane Steichen. “He had one in the two-minute drive (against the Broncos) he threw to [Jalen] Reagor down the sidelines, a stop route. He stayed in there and got drilled. I mean, that’s great strides right there, seeing that, making those big-time throws.”

Hurts, of course, also possesses a trait that neither Peyton nor Eli did, the ability to beat teams with his legs.

“He’s still making those plays outside the pocket,” added Steichen of Hurts.

Hurts’ most impressive attribute, however, is his work ethic and a deep desire to improve that keeps the young signal-caller open to learn from anyone and everyone.

That includes his peers with the Eagles’ QB mentioning meeting Teddy Bridgewater in person last Sunday in Denver and Cam Newton back in training camp.

“Meeting Teddy Bridgewater in person, that’s a guy I watched coming out of high school,” said Hurts. “He was at Louisville and obviously seeing him going to Minnesota. A ton of respect for him and the things he’s overcome, and the player he is. … I met Cam this year for the first time – a guy that everybody watched as a kid. An electric player at Auburn. He’s had a great career in the NFL. So many great players.”

“I just try to be a sponge to it all and learn whatever I can to enhance myself.”