Inside the Friday Meetings Between Nick Sirianni and Jalen Hurts

The Eagles head coach and quarterback meet every Friday after everyone leaves the NovaCare Complex. 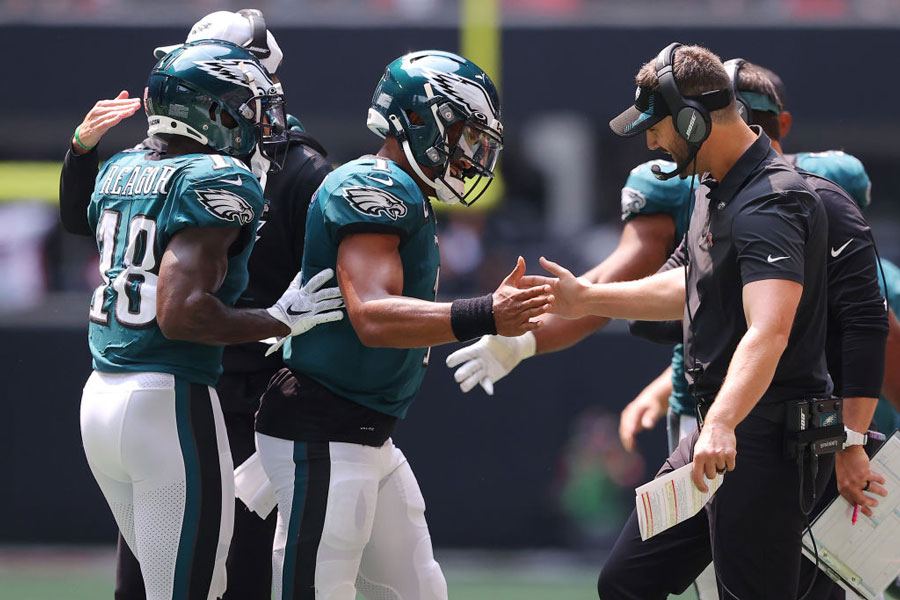 Jalen Hurts and Nick Sirianni celebrate a touchdown during the second quarter against the Atlanta Falcons at Mercedes-Benz Stadium on September 12th. / Photograph by Kevin C. Cox / Staff via Getty Images

The punctuation of Focused Fridays at the NovaCare Complex ends with the exclamation point of the head coach meeting with the quarterback.

The Friday get-together between Nick Sirianni and Jalen Hurts in the coach’s office after everyone else exits the facility began at the behest of the QB1.

“I told him I want to come up there and holler at him,” Hurts explained Wednesday before practice. “We talk. He was like, ‘Let’s make this a Friday thing.’ That was already my intentions, but it’s a Friday thing.”

“It’s been a minute now,” Hurts said of the meetings which are obviously about the upcoming opponent but much more than just that.

“I guess throughout the course of the year we realized that’s what we need to do,” said Hurts. “I come up here and give [reporters] all the reference to that and how our communication has gotten better and things we do to build a better relationship to continue to grow and pick each other’s brain. Friday meetings are something we find very important for us and the team, just talking about life, things we got going on.

At 3-6 with a strong Denver defense on the horizon, things have not exactly gotten rolling just yet, but Hurts is not deterred by the pressure of a passionate football market, perhaps due to his time at Alabama and Oklahoma in college.

“I don’t see it as pressure, but it’s something we both embrace. We want to win.” Hurts said. “One thing I realize is, we kind of realize it about one another, we’re more alike as a competitor than we think. We both may express it in different ways, but coach and I, we want to win. We work hard every day, put the work in every day, to get better and help the team, so we’re going to continue to do that and the results will come when they come.”

It’s a constant evolution, like the shift from a lot of spread and read-option looks early in the season to the run-heavy, play-action scheme when run-deficient defenses like Las Vegas, Detroit, and the Los Angeles Chargers showed up on the schedule.

Other tweaks like QB coach Brian Johnson coming down from the coaching box to the field over the past two weeks are constantly being tried.

“[Offensive coordinator] Shane [Steichen] and I, really, in between a set, I have to be there with the defense and looking at the defense, and anything that’s going on right there, and Shane and I are talking in communication,” said Sirianni when discussing the change. “We adjust things to make it work, the best process. Shane would be spending time with Jalen on the sideline, looking at the pictures, and was, you know, we weren’t able to get to some talks every time, like, if it was a quicker three and out or whatever it was. And so, now Brian can look at the pictures with him, Brian can talk to him about things they talked about all week.”

Hurts likes it because he’s known Johnson since the position coach played for Hurts’ dad in high school.

“I spend a lot of time with him, so to have him on the field is good for me,” Hurts said of Johnson. “My relationship with Brian goes long before his coaching time. I remember watching Brian go beat Alabama when he played at Utah. Watching him as a kid even when my dad coached him. It’s been a great relationship.”

Now, the delegation to Johnson makes Hurts more comfortable and opens up the ability for Sirianni and Steichen to concentrate on bigger-picture items when it comes to overall game management.

“You have a ton of different people that have their hands on the quarterback, coach Steichen, coach Sirianni, and coach Johnson,” said Hurts. “Everybody’s always on the same page, so we’re all preaching the same things so we can be as efficient as we want to be. I’ll say again that Brian has been very important to me in my time here thus far this year. He’s been good for us.”

Sirianni, meanwhile, values his opportunity to bond with the man tasked with running his offense on the field.

“I think you get more comfortable with each other, and you talk more,” said Sirianni. “We just talk about anything other than football. So, I just think you grow your relationship, the connection grows, the relationship grows, and everything grows. And as that grows, the communication gets better, the chemistry gets better. I think that’s just a part of growing as a football team.”

These types of meetings are nothing new for Hurts, who also craved them with Nick Saban and Lincoln Riley, a natural path to take for a coach’s son.

“I got a lot of time with him,” Hurts joked of his dad.

With Saban, it was after games while Riley was the precedent for what’s going on with Sirianni.