An Heir Apparent Emerges at Defensive Tackle for the Eagles

Rookie Milton Williams had a breakout game in Detroit. 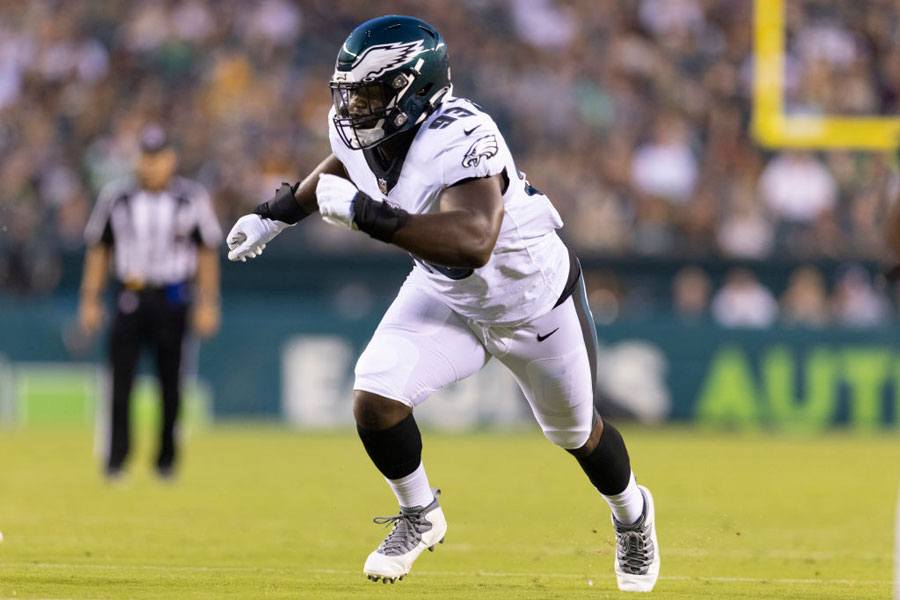 The Eagles were picking up the phone earlier this week when it came to the potential trade of six-time Pro Bowl defensive tackle Fletcher Cox.

Nothing got done by the NFL’s trade deadline on Tuesday, of course, but you have to wonder if Milton Williams’ emergence in Detroit on Sunday got general manager Howie Roseman a little more comfortable when it came to listening to offers for what has been his best player for a decade.

A third-round draft choice out of Louisiana Tech back in April, the Eagles projected the six-foot-three, 285-pound Williams as a Brandon Graham-type, a bit of a fireplug with inside/out versatility who could be used as a base end or a three-technique.

Like many rookies, there were some start-up costs with Williams through a 2-5 start, but this past Sunday in the Motor City you saw the explosion that had defensive coordinator Jonathan Gannon fired up when the Eagles secured the Crowley, Texas native.

“I’ve been playing this game a long time, and it hasn’t all been perfect,” Williams admitted at the NovaCare Complex Wednesday. “I didn’t play my first two years in college but consistently put the work in behind scenes to make sure I was handling what I was supposed to be handling to take advantage of the opportunities when they came along.”

They came along Sunday against the 0-8 Lions when Williams recorded a career-high four tackles, his first NFL sack, two tackles for loss, and a quarterback hurry in 34 snaps. The playing time itself was notable because it was the team-high for defensive linemen, partially because of the blowout nature of the game but also because Williams was producing, so much so that he was awarded a game ball by the coaching staff.

“First game ball ever, I have to keep that somewhere safe,” Williams said, smiling. “That moment was big. … That’s the thing about football. It’s a team game, so you keep doing your job consistently and make sure you’re handling what you’re supposed to be doing and it will eventually come to you.”

Gannon has preached a more disciplined approach on the defensive line as a whole compared to his predecessor, Jim Schwartz, who advocated a more aggressive approach designed to play the run on the way to the QB.

That suited Cox to a tee, a player who made five Pro Bowls and lived through three postseason appearances and a Super Bowl LII championship with Schwartz. Like many veterans in that circumstance, Cox has embraced the human nature approach of that’s what worked, so why change it?

Williams, on the other hand, is entering the league with Gannon’s mindset as the default setting and sometimes that kind of turnover is needed for a new coaching staff. The rookie is doing what he’s told, and the veteran is essentially asking “why?” when it comes to scheme and game-planning.

“Like I tell everybody, my main thing is — if I want to be on the field — is make sure I’m doing my job,” Williams said. “And if all 11 have that mindset of doing their job, we won’t get scored on.”

While Cox wasn’t moved by Tuesday, there remains a good chance that 2021 is his last season in Philadelphia — especially now that the Eagles have highlighted a willingness to accept the dead money that moving on from Cox would entail. If Williams continues to excel at the three-technique in the second half of the season, that sentiment will only grow for a team in a rebooting phase and looking to get younger.

Williams, though, isn’t thinking about that and has been using Cox, perhaps the second-best interior linemen of his generation behind the Rams’ Aaron Donald, as a sounding board.

“I’m glad Fletch is still here,” said Williams. “He’s a great player and a good player to learn from so he’s been big for me as far as my career, him, BG, Grave [Javon Hargrave], all those D-linemen have helped me a lot. I’ve learned a lot from him, and I’m glad he’s still here.”

Gannon, meanwhile, is starting to see what he envisioned back during the draft when he wanted Williams.

“A lot of stuff for any rookie is new, and just what we ask him to do and different things in the run game, in the pass game, he’s improving in those things,” the DC noted. “And what happened in the [Lions] game was some production came with him increasing his role and getting better and better and better and the ball came his way a couple times, and he made the plays.”

“It was good to see him have some success and some production, even though he’s been producing within our defense. But on the stat sheet, it shows up that he made some plays and some impact plays for us.”

The biggest impact was a fourth-down sack of Jared Goff, a milestone Williams will never forget.

“I really don’t have words to explain that,” Williams gushed. “It just felt like I was on top of the world, but it was the first one and we have a lot more to go. … I’ve been putting a lot of work in and a lot of people on the outside don’t see the work that you put in, but to finally get some stats on the stat sheet. Like JG said, I know I’ve been doing my job, doing what they’re asking me to do on defense, but to finally get it on paper, to get a sack, TFL’s things like that.”

“I think I’m already good as far as in the run game, coming off, striking my guy, make sure I’m staying in my gap, but I just want to be a more consistent, more polished pass rusher,” Williams assessed. “You don’t want to have too much on your mind, you want to have one or two moves and a counter, and that’s it. Because if you go out there with too much, you won’t know what to do to be consistent. So keep the menu short and perfect the things you have on your menu.”