Eagles vs. Lions: By the Numbers

Both the Eagles and Lions are struggling. NFL reporter Paul Domowitch explains why in his latest look inside the numbers. 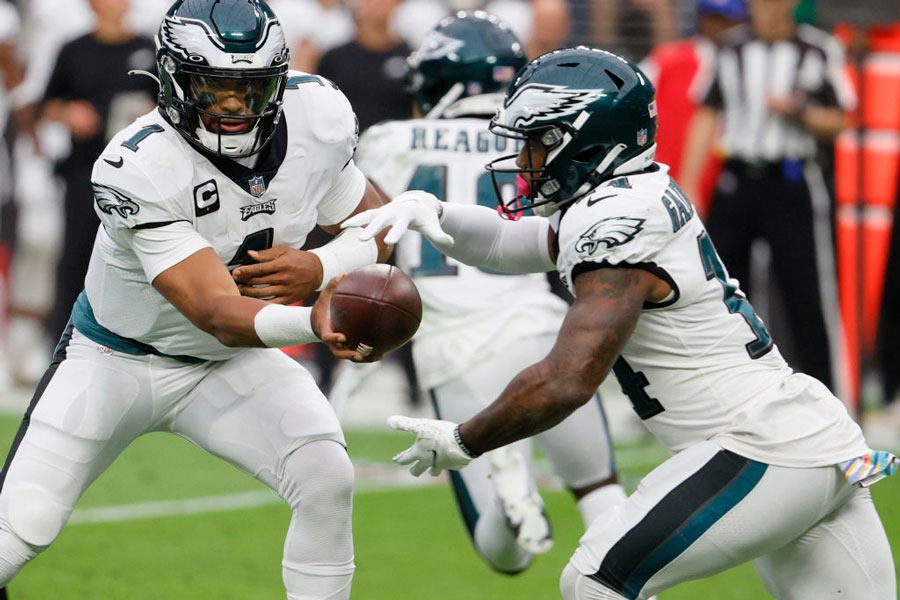 Jalen Hurts hands the ball off to Kenneth Gainwell during their game against the Las Vegas Raiders at Allegiant Stadium on October 24th. / Photograph by Ethan Miller / Staff via Getty Images

In the past seven seasons, an opposing quarterback managed to complete 80 percent of his passes against the Eagles defense just twice.

That was it. Twice in 112 regular-season games over seven years.

It’s been quite a different story this season, however. With new defensive coordinator Jonathan Gannon installing a bend-but-hopefully-maybe-don’t-completely-break scheme that has the safeties playing somewhere near Wilmington and the linebackers running around like they’re lost in the woods, the football has been hitting the ground less than falling Cheerios around a beagle.

Through the first seven weeks, the Eagles have the worst opponent completion percentage in the league (74.4). On Sunday, the Raiders’ Derek Carr became the fourth quarterback in seven games to complete 80 percent of his passes against the Eagles, and the first since 2012 to complete 90 percent. He had just three incompletions in 34 attempts (91.2) in the Raiders’ 33-22 win.

Five of the 14 touchdown passes the Eagles have given up have been to tight ends, including one in each of the last three games.

The Eagles seemingly caught a break Sunday when Pro Bowl tight end Darren Waller, who had 107 receptions and nine TDs last year, sat out the game with an ankle injury.

But their No. 2 tight end, Foster Moreau picked up the slack, catching six passes for 60 yards and an 18-yard TD.

The week before, the Eagles played the Gronk-less Bucs. But their other two tight ends, O.J. Howard and Cameron Brate, combined for nine catches, 75 yards, and a TD (by Howard). The week before that, Carolina Panthers rookie tight end Tommy Tremble had a TD catch in the Eagles’ come-from-behind 21-18 win.

In their Week 3 loss to the Cowboys, Dalton Schultz had six catches for 80 yards and two touchdowns against the Eagles.

Tight ends have 41 catches for 352 yards and five TDs against the Eagles in the first seven games. They have a 75.9 catch rate and are averaging 8.6 yards per attempt.

This week, they’ll be facing another good pass-catching tight end in the Lions’ T.J. Hockenson. His 38 receptions are the second-most by a tight end, behind only Kelce (45). Hockenson has been targeted 20 times the last two games with 14 catches for 122 yards.

Here’s a look at how the Eagles defense did against opposing tight ends the previous five years under Jim Schwartz:

The Eagles defense has held opponents to 5.4 yards per play on second down this season, which is the seventh-best average in the league. But in their last two losses to the Bucs and Raiders, they’ve struggled mightily on second down, particularly against the pass.

The Raiders had 23 first downs Sunday. Fourteen of them came on second down. Another five came on first down.

Partly because they were playing from behind the entire game – again – but mostly because it’s the way Nick Sirianni wants to take the offense now that Zach Ertz is gone and he’s got three young wide receivers he wants to highlight, the Eagles used 11-personnel on 58 of 68 offensive plays against the Raiders (85.3 percent). That’s the highest usage of 11P this season.

A breakdown of their 11-personnel usage in the first seven games:

Gannon has been determined not to give up the big play this season, and he has succeeded with respect to that. The Eagles have allowed just 32 run and pass plays of 16 yards or more, which is the fourth-fewest in the league through the first seven weeks. But they’ve given up 54 plays that have gained between 10 and 15 yards, which is the ninth most. The Eagles have given up 23 touchdowns in the first seven games. Thirteen of those TD drives have been 70 yards or more. Fourteen have been eight plays or more. The defense spent all summer working on stripping and punching the ball away from the ball carrier. But they’ve had enough problems just tackling people let alone forcing fumbles. They’ve forced just one fumble and are tied for 18th in takeaways with seven.

With respect to their tackling issues, the Eagles have given up 544 yards to their opponent’s leading rusher in the first seven games. Three hundred fifty-three of those yards, or 64.9%, have come after contact, according to Pro Football Focus. In the last three games, however, that percentage has jumped to 72. A game-by-game breakdown:

Hurts is second to the Ravens’ Lamar Jackson in rushing yards by quarterbacks. Jackson has 480. Hurts’ 25 rushing first downs also are second to Jackson, who has 29.

The Eagles attempted just one screen against the Raiders. It was to Miles Sanders and lost three yards. In their last three games, the Eagles have run nine screens and gained minus-three yards.