Personnel and schematic changes could be in the mix for the offense in Sunday’s game. 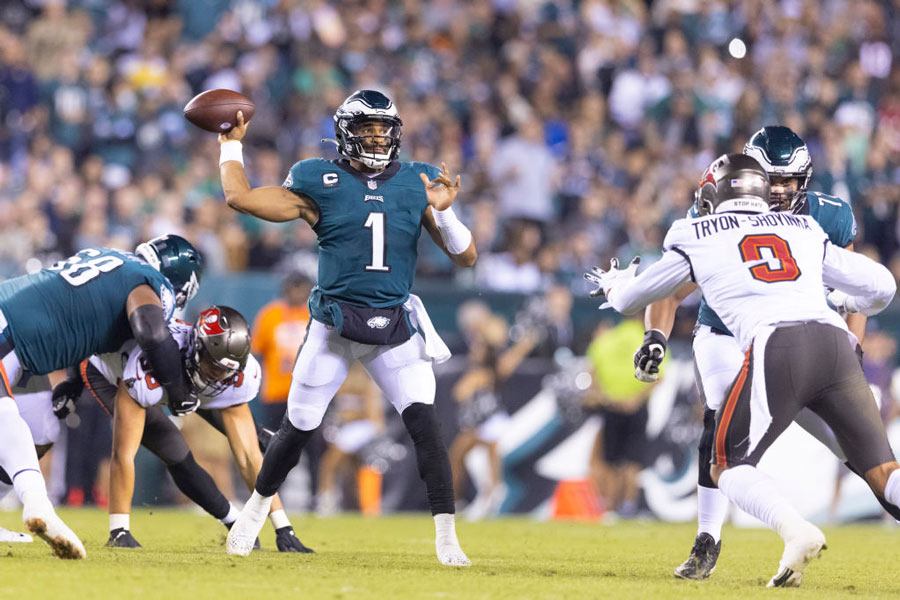 A lot can happen over a mini-bye week in the NFL. The Eagles, for example, got a weekend off to digest the exit of Zach Ertz via trade to Arizona and the potential return of Lane Johnson, who has been struggling with anxiety and depression.

By Sunday in Las Vegas, Dallas Goedert could finally have the role of TE1 to himself, provided the veteran is cleared and removed from the Reserve/COVID-19 list and Johnson could be back at his familiar right tackle position, a domino that would also shift Jordan Mailata to left tackle and Andre Dillard back to the bench.

“It’s great to have Lane back,” said offensive coordinator Shane Steichen said Tuesday. “I just saw him for the first time [Monday]. Obviously, he’s a big part of our offense and we’re excited to have him back.”

There was the occasional injury over the years, but Sunday’s games at Allegiant Stadium will be the first that Ertz won’t be a member of the Eagles since he was drafted in the second round back in 2013.

“I just want to wish Zach the best,” Steichen said. “Being around him the short time that I was during training camp and these first six weeks, he was an ultimate pro, did everything you wanted, studied the game, loved the game, worked hard and I wish him nothing but the best.”

Steichen admitted the obvious, that Goedert’s role will increase, but also noted that the team’s other young TEs — Jack Stoll and Noah Togiai as well as Tyree Jackson, who is getting closer to a return from a training camp fracture in his back — will get opportunities.

“Obviously, Dallas’s role will probably pick up a little bit more, and then obviously Jack and Tyree and Noah,” Steichen said. “All those guys are going to be able to step up and make some plays.”

The most interesting part of the mini-bye, however, is whether or not the extra three days will result in schematic changes to Nick Sirianni’s offense.

Quarterback Jalen Hurts hasn’t thrown the football over the middle much over the first six games, a paltry three percent of his 208 throws, which is a grand total of six times — by far the lowest rate in the NFL this season.

It’s perplexing because players like Goedert and Ertz excel between the hashes, and rookie Kenny Gainwell certainly has the potential to do so on angle routes.

To date, Sirianni has claimed that the failure to throw over the middle is not about protecting Hurts but related to what opposing defenses have been allowing the Eagles to do.

Much like the missing running game, however, it’s almost inconceivable that there hasn’t been more traffic between the hash marks, unless there has been a concerted effort to protect Hurts.

Steichen stayed the course, though.

“I think when you’re looking at plays and what defenses are doing defensively from a coverage standpoint, are they giving you the middle of the field?” the OC asked rhetorically. “If they are, we’re going to take it, and if they’re giving us one-on-ones on the outside, we’re going to take that. So, I think that’s a game-by-game basis.”

As for the running game, which has been heavily weighted toward Hurts in an RPO-driven setup at the expense of Miles Sanders, Steichen was at least a bit more open to realizing a tweak needs to be made.

“I think that’s something we’ve looked at,” Steichen admitted. “Obviously, we popped some [good runs] late in the game where he popped them, and those could have been called runs, they could have been RPOs. From the naked eye just looking at it, you don’t really know. Not trying to get too schemey with it, but Miles is a heck of a back, and we’ve got to get him going.”