On Jalen Hurts in Carolina: Perseverance and the Big Play

The Eagles’ QB1 was struggling mightily, but he kept plugging along until the Panthers’ defense broke. 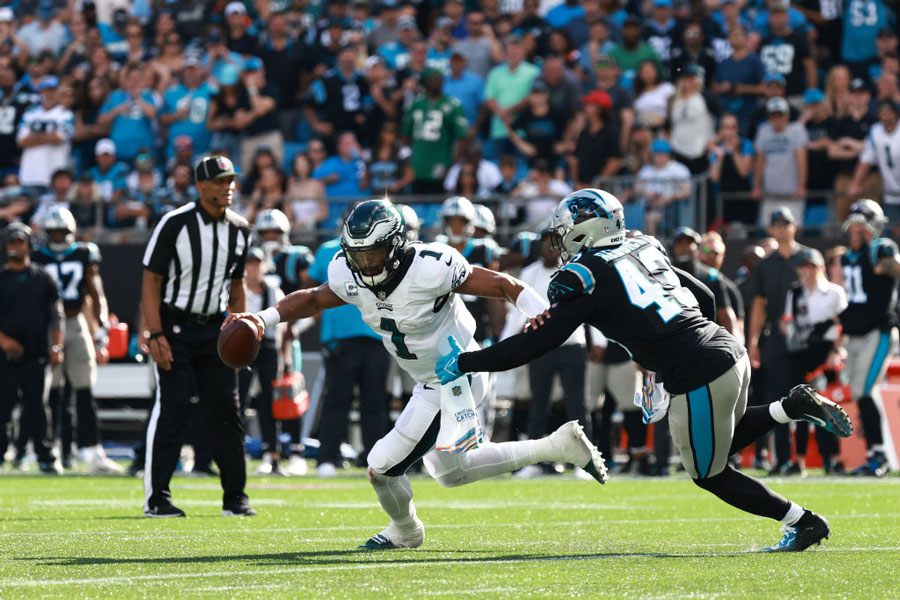 Jalen Hurts runs with the ball as Haason Reddick of the Carolina Panthers defends at Bank of America Stadium on October 10th. / Photograph by Grant Halverson / Stringer via Getty Images

There are a lot of ways to evaluate NFL quarterbacks, with things like arm strength, accuracy, footwork, and processing skills tops among the qualities personnel executives look for. As a young, second-year signal-caller, Jalen Hurts has been able to flash those traits at times, with the goal of the coaching staff unearthing ways to make everything a little more consistent on a week-to-week basis.

What really sets Hurts apart, however, are the intangible strengths he possesses, everything from natural leadership skills to work ethic and perseverance, the latter of which was unveiled on Sunday in Charlotte. Hurts was able to flush a dismal first half and then go on to make enough plays in the second to engineer an improbable 21-18 comeback that virtually no one outside the Eagles’ locker room saw coming.

Hurts started the game 12-of-20 for 35 yards (an almost unthinkable 1.75 yards per attempt) and somehow the Eagles’ QB1 came out of it unfazed. The rest of the game wasn’t great, as Hurts simply didn’t have his best stuff — to use a baseball analogy — but he did rebound to finish 22-of-37 for 198 yards, with just enough big plays in the second half to supplement a great defensive effort and solid special teams work.

It was the kind of grit and perseverance you expect from the old warhorses who’ve seen and done it all.

“He’s such an old soul,” Mailata smiled. “He has an old head on his young shoulders, and it shows very late in games. He’s still there talking us up. The grit, the perseverance, those are the qualities he himself possesses. He’s all bite, no bark. He talks it and he walks it. So, that’s very encouraging to see from your QB, and you just want to make sure you have his back.”

Hurts is far from conventional.

He doesn’t have the Brett Favre fastball, Peyton Manning’s processing skills, Patrick Mahomes’ off-platform abilities, or Lamar Jackson’s speed. What he does have is the ability to keep everyone fighting when all hope seems lost and a personal zen to stay calm in any circumstance like when Mailata whiffed on speed rusher Haason Reddick on consecutive plays.

Hurts simply told his 6-foot-8, 380-pound bodyguard “next play,” something Mailata paid forward when Hurts was off the mark on an important throw.

“I’m just so happy we came together and found a way to win as a football team.”

The tide finally shifted with a big 53-yard Hurts pass to the speedy Quez Watkins, a play that led to the first of the two rushing touchdowns for Hurts that ultimately put the Eagles over the top.

“Sometimes all you need is a big play,” Eagles head coach Nick Sirianni said. “It was so much a credit to the defense for keeping it close, and then to hit that play, almost breathe new life into the offense … It felt different after that. That was a big play in the game. Great job by Jalen finding it. I thought Jalen overthrew him. It was great to see Quez put the burners on and go and track that ball.”

Hurts would be the first to tell you he didn’t play well, but the Eagles played well enough to win — and that’s more important to him.

“I think we executed enough to win the game,” said Hurts. “Often you come back after a game, maybe you left some stuff out there on the field and you say we didn’t play well enough. Well, we didn’t play to our standards today, offensively, but it was enough.”

By Monday, Sirianni again page marked the perseverance tab when it comes to his QB.

“It was perseverance and his ability to just forget what happened in the first half, because everything that we wanted out of that game, which is obviously to win the game, was right there in front of us,” the coach explained. “He took advantage of it and played a really good game in the second half. You’re just going to want some throws back, some reads back, and that kind of even extended into the third quarter a little bit for all of us, not just Jalen but the entire offensive unit and coaching staff.