Jalen Hurts Is Proving His Worth to the Eagles

The second-year quarterback is showing his value in an effort to become the Eagles’ long-term answer at the game’s most important position. 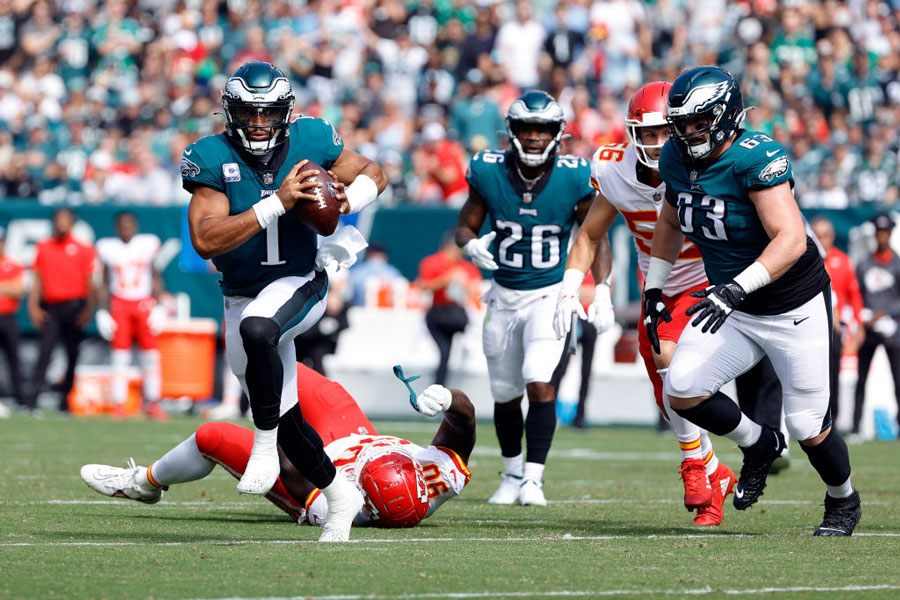 Nick Sirianni has been around a lot of good quarterbacks, most notably Philip Rivers and Andrew Luck. On Sunday, the Eagles’ rookie head coach saw “one of the better quarterback performances I’ve seen,” and it wasn’t the five-touchdown performance the über-talented Patrick Mahomes hung on the Eagles defense. Sirianni was referring to Jalen Hurts and his second-year QB’s eighth career start.

Hurts finished 32-of-48 in a 42-30 setback, throwing for a career-high 387 yards and two touchdowns while adding a team-leading 47 more yards on the ground.

Hurts, though, wasn’t about to accept any gold stars.

“Look, we lost,” the young signal-caller said after being told about Sirianni’s praise. “We lost. We lost the game. We gotta do more, gotta do better. This is what I’m going to say: We got every opportunity to learn, right? Every opportunity, everything you do, you learn from it. And we’re clearly not there as a football team. We lost. But we’re this close.” Here, he held up fingers close together. “And that’s something that I believe.”

Through four games, Hurts has put up some gaudy numbers, throwing for 1,167 yards with a 66.2 completion percentage, with seven touchdowns against two interceptions and a 101.1 passer rating. Add in his team-leading 226 yards rushing, and Hurts has been one of the top playmakers in the league as he tries to convince the Eagles organization that he’s not just a placeholder for the next big thing.

As for the film grade, Hurts has also been more than acceptable, coming out as number 13 of 35 around the league per ProFootballFocus.com.

The Ted Lasso mantra is an important part of this, because the one number that is not acceptable is the Eagles’ 1-3 record. It’s worth noting, though, that the early part of the season is clearly the tougher portion of the schedule, with the Birds’ season-opening victory followed by losses to potential playoff teams in San Francisco, Dallas and Kansas City. The potential-post-season-teams trend continues over the next three weeks as well, with road games at Carolina and Las Vegas sandwiching a Thursday-night home game against the reigning Super Bowl champion Tampa Bay Buccaneers.

To track Hurts’s progress — and perhaps the Eagles’ thinking on the young QB — you should rewind to the beginning of training camp, when general manager Howie Roseman was asked about benchmarks by which to judge his development. “You want to make sure you’re doing everything possible to have that (QB) room successful,” Roseman said. “That starts up front. … From there, talking about the skill position group. Most of these guys, the receiver group … those are young guys. They get a chance to grow and build together. But it starts with the offensive line, making sure we’re looking at ourselves in the mirror and saying can we fairly evaluate the quarterbacks because of who is protecting them and the weapons they have around them.”

Unfortunately, the Eagles’ O-line was down 80 percent of its Week One starters against the Chiefs after Lane Johnson was a late scratch due to a personal issue. The All-Pro right tackle joined the injured Jordan Mailata, Brandon Brooks and Isaac Seumalo on the sidelines, and Hurts had his best game under Sirianni with a makeshift line where Andre Dillard and Lane Dickerson flanked Jason Kelce to the left, with Nate Herbig and Jack Driscoll to the right.

The young receivers have also flashed, with DeVonta Smith having his first career 100-yard game against the Chiefs (7-122) and Quez Watkins proving to be a playmaker at times.

“We’ve played good football teams to this point, every game,” said Hurts. “It’s all magnified. It’s on us to execute and do the things that we do.”