The coffee magnate traveled to SXSW this week to support the Amplify Philly effort. We sat down with him in Austin to get his takeaways. 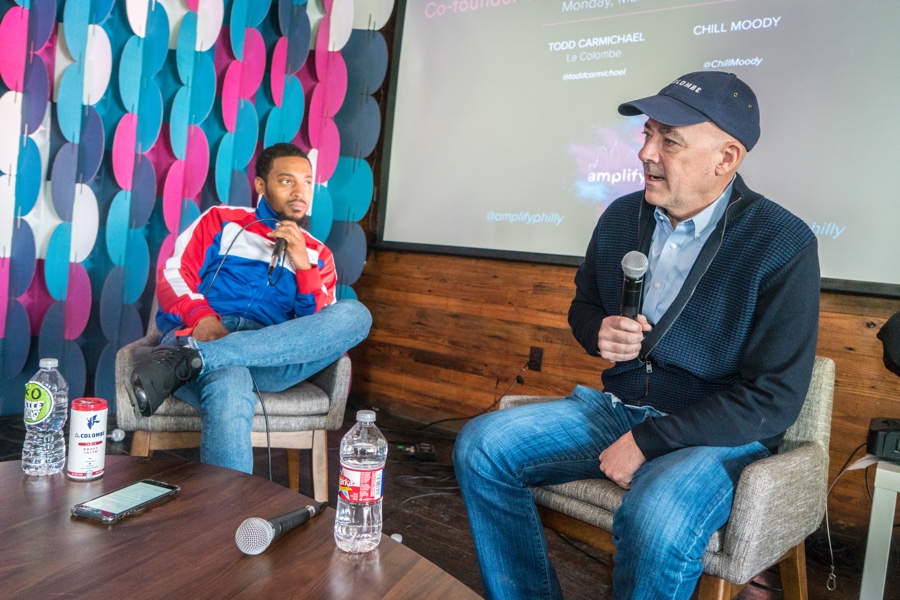 Todd Carmichael and Chill Moody in conversation at SXSW 2018.

Todd Carmichael is Philadelphia’s biggest fan. The La Colombe cofounder and CEO threw his support behind the city this month with a big contribution to the SXSW 2018 Amplify Philly initiative. Draft lattes were dispersed all throughout the Amplify Philly house for visitors who stopped in to see what Philly had to offer. And the coffee magnate even flew down to Austin to kick it with Philly entrepreneurs and creatives. In a one-on-one chat with rapper Chill Moody, Carmichael explained why he is so vocal on issues that affect some of the world’s most vulnerable. “It’s my responsibility,” he said. When you hedge and grow, you end up becoming spineless and have no impact. CEOs right now are afraid to speak out but they should.” I caught up with Carmichael after his talk to learn about his SXSW takeaways. He also opens up about lessons from his endless travels (he says he’s been almost everywhere in the world) and multiple near-death experiences.

I grew up in… Spokane, Washington.

A lesson from childhood that has stuck with me is… the best hero in your life should be you.

I settled in Philadelphia because… I was looking for a city that needed me.

My love of coffee started… when I was 18 years old.

Traveling nonstop has taught me… to pack lightly. No seriously. [Laughs] I can get a week’s worth of clothing into a small space.

My most exciting adventure… are my children. The biggest adventure in my life is having four beautiful children. Everyday it’s like it’s a new surprise.

I’m very vocal across all my platforms because… I think I can help make a difference.

I decided to support the Amplify Philly initiative this year because… I want to give back to Philadelphia because La Colombe and Todd Carmichael couldn’t have really existed without this city. I want to give dividends back to the city.

Philly’s best asset is… its people.

In Philly we still need… I have to pick just one right? We still need a Stanley Cup.

Something outsiders don’t understand about Philly is… we’re real direct because we care.

I have 07:49 tattooed on me because… It represents 39 days, seven hours and 49 minutes. It’s the amount of time it took me to walk from the coast of Antarctica to the South Pole.

The most important thing I learned about starting a company is… your success will depend on your hustle.

My biggest career accomplishment is… well, in twelve months we put draft lattes in 62 percent of all the stores in the United States of America.

Something I constantly feel like I’m up against is… time.

I’m worried about… the next generation.

Having a near-death experience can… well which one? In Antarctica, it was a reminder that life was short. I’ve had others in Angola and then Columbia, too. There have been multiple.

The last time I cried was… every single time my kids are in plays. Just last week my 15-year-old was in the production of Hairspray. You know, I’m one of those dads. I really am. I’m so proud.

In ten years I see myself… a little older and a little wiser.