What Are Philly Leaders Doing at Amazon’s Seattle Headquarters?

A team landed there on Thursday. Here's what they've been up to. 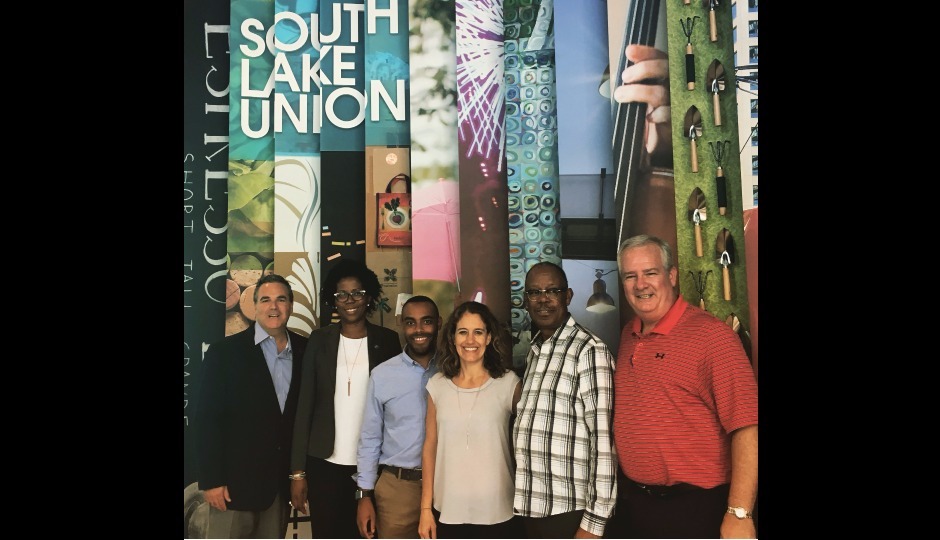 An official delegation of eight Philly representatives descended on Seattle Thursday morning as part of Philly’s mission to hook Amazon’s coveted HQ2. Thursday evening I caught up with Department of Commerce Chief of Staff Sylvie Gallier Howard, who’s on the two-day trip, to find out exactly what the team has taken in so far.

BizPhilly: Bids for Amazon’s HQ2 aren’t due until mid-October, and you’re not exactly meeting with Amazon. So why exactly is a Philly delegation out in Seattle?
Gallier Howard: I’ll start by saying that we reached out to Amazon and asked if they had any guidelines we’d need to follow while we are out here. They told us they cant host meetings but welcome us to come out and get a feel of the campus by just walking around and exploring. So we’re out here to see their headquarters firsthand to understand their style, their ethic and culture. We’re also meeting with local organizations and companies to get a sense of the transformation that’s taken place. We want more insight into the companies that have set up around Amazon. 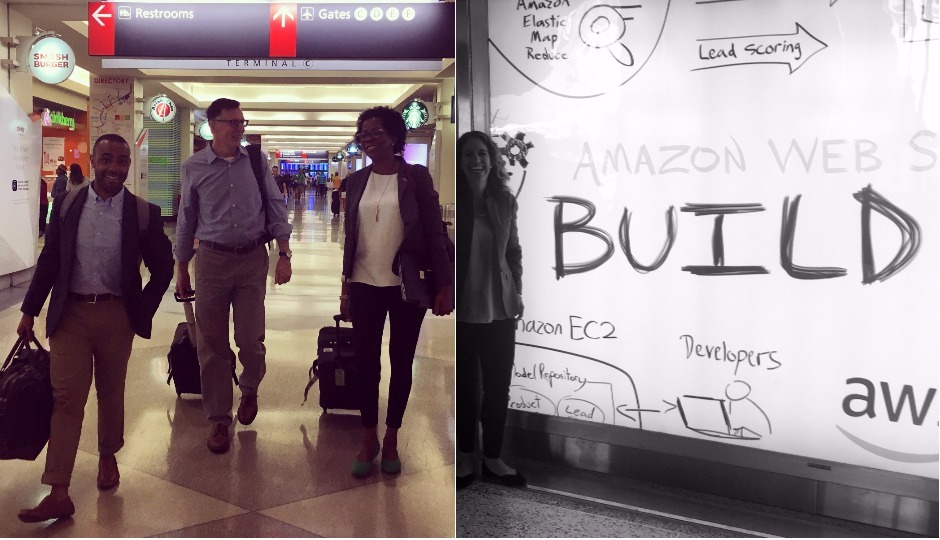 BizPhilly: What are the team’s first impressions?
Gallier Howard: We’re in South Lake Union where Amazon started, and the entire neighborhood definitely has a campus feel. Because Amazon started here way back when, there’s a noticeable difference between the older buildings and the new ones. The newer buildings are definitely more stylized. This area was once all industrial and there were no residential buildings at all. The buildings are also quite low because of zoning restrictions. That’s created a unique feel.

There are so many bikes and dogs everywhere and also a lot of diversity. Amazon has put in a number of sustainability elements like structures for storm water management. There’s a Starbucks on every corner and the population feels really young. I feel like I’m on Penn’s campus.  Nearby there are skyscrapers in the business district, but it’s definitely more of techy scene on campus. There are Google and Microsoft buildings here and ad agencies and architectural firms. We’ve also noticed the area’s biotech scene. Overall, it feel like a booming hub of talent. 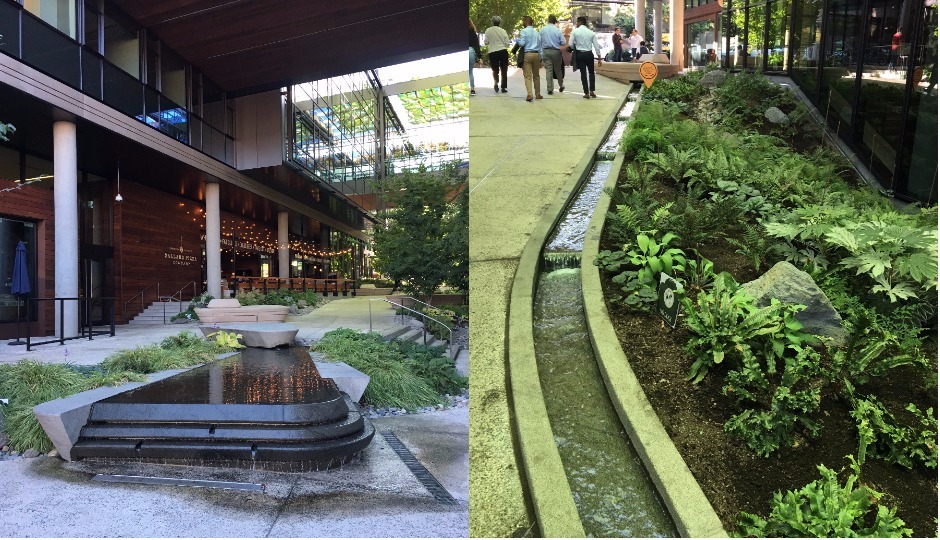 BizPhilly: What are your top takeaways so far?
Gallier Howard: Well we already knew from the RFP the kind of talent Amazon is looking for. But even here in Seattle they have 9,000 job openings at their headquarters. They have some rigorous talent standards and the main university is the University of Washington. By comparison, in Philly, we have tons of universities and our city is accessible by a couple of hours to other nearby talent hubs. So a key thing is that we have that. Another big takeaway is that Amazon came to this once industrial area as a startup. This shows that with the second HQ they are looking really differently at quality of life. They really want a place where talent will want to live, a place that’s already got bars and coffeehouses. So we should definitely be talking about the great restaurants in Philly and our quality of life.

BizPhilly: Have you seen something that you weren’t expecting to see?
Gallier Howard: I was imagining that there would be a lot more people around. We toured the neighborhood during the workday. So again, it’s very much a place of work and not a residential area. The biggest surprise to me is that is that there are no schools here or churches or other institutions. It’s just a bunch of businesses. 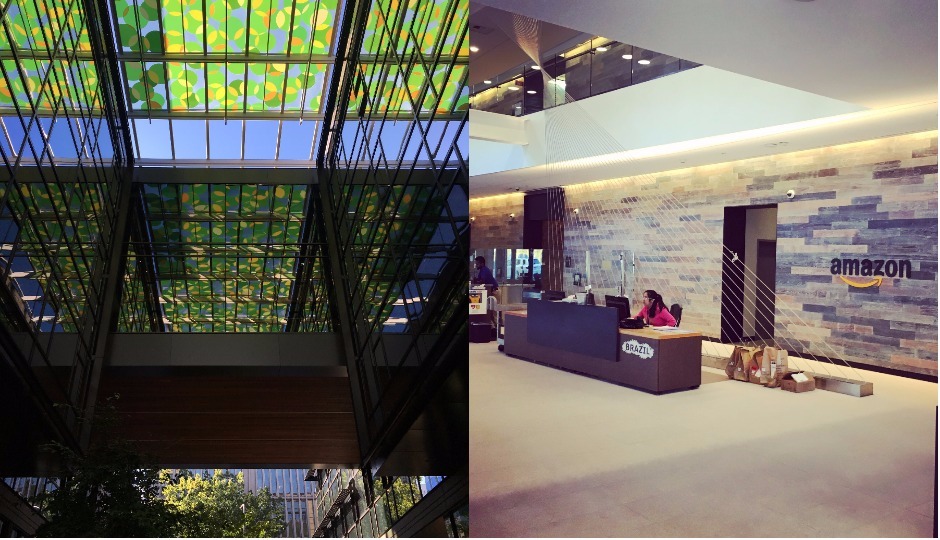 The ground floor lobby of one building on campus. Courtesy photo.

BizPhilly: Speaking of what Philly has to offer, where is the city with its proposal?
Gallier Howard: We are advancing really well. At this point there’s a creative piece and a written piece. The written piece is in draft mode and going through iterations. There’s a lot of research going into it because they ask for all sorts of data and metrics. So we’re still doing a lot of analysis. The creative piece will give them a visualization of what we’re offering.

We have around 12 to 15 city employees working on it, and it’s intense because we’re trying to do our normal jobs at the same time. We have Select Greater Philadelphia and PIDC on board. Harold Epps and John Grady are co-chairs of the steering committee. Anne Nevins and myself are lead staff. Duane Bumb is leading sites and incentives, and Eleanor Sharpe is leading the housing and infrastructure piece. We also have a stakeholder engagement piece. We’ve been getting thousands of responses and emails and offers of help. We really want to engage people and take advantage of the positive spirit. That’s why we have point people for different stakeholder groups. Our #PhillyDelivers form has been a way to get great ideas. Campus Philly is working on the higher education piece. The Chamber and Visit Philadelphia are also involved. Creative firms are working on the visualization. It’s basically a war room right now.

BizPhilly: What are some fears or concerns you all have?
Gallier Howard: The main thing is that this process is super competitive. Even Seattle is putting in a bid. I mentioned it to someone here and she said, “Why would we not?” So even if Amazon doesn’t come to Philadelphia, this is still a beneficial process because it’s organized so many people. We’re thinking more about our tax environment and what we can offer in terms of incentives. We’re also having good discussions with the state. Some states and cities are richer than others, and we all just have different tax structures. But with Philly being a big city, our low cost of living is a big draw.

BizPhilly: What’s your response then to the idea that Amazon would change the very thing that makes Philly so attractive?
Gallier Howard: If we had an infusion of jobs it would definitely scale up the city and those jobs would come in over time. Whenever you have economic development on that kind of scale you have to mitigate increasing costs of development. Amazon has done this already, and they don’t want to have some of the negative impact that they had the first time around. We can work with them to make sure they scale up the right way. There are plenty of people in Philadelphia who need jobs and we have plenty of housing stock. It can be a real symbiotic relationship. It would be a huge influx of tax revenue, and we can rethink our tax structure. Even so, with things like reducing BIRT or the wage tax, that has to be done slowly because of all of the services we have to provide for. 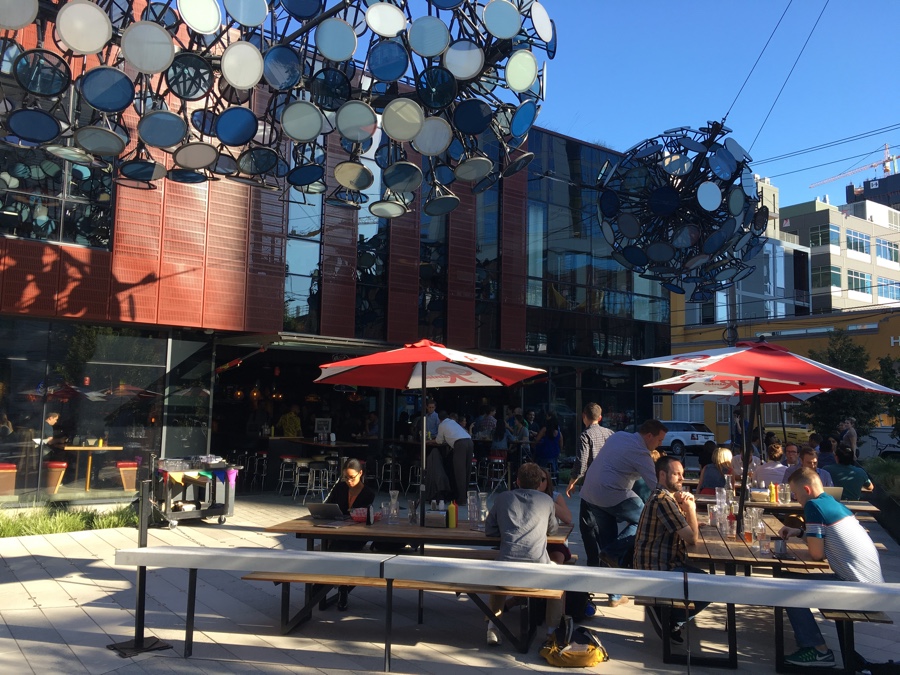 BizPhilly: Do you really think Philly is ready for something like Amazon’s second HQ?
Gallier Howard: I really do. Jeff Bezos has said he’s not concerned with being misunderstood. So that means if Amazon comes to Philly, that’s not the obvious choice. Everyone isn’t like that’s the place where all the tech talent is. But, we’re growing our tech sector and jobs here. We have the second highest growth in tech jobs after the Bay Area. We have a spark right now. If they came here, they’d be moving to an untapped goldmine as opposed to other places. Amazon didn’t need to do an RFP to find out there’s a lot of tech talent in Boston, so I think they’re looking to uncover something.