After years of unrest at PHL, airline contractors agreed to start negotiations with 32BJ SEIU. 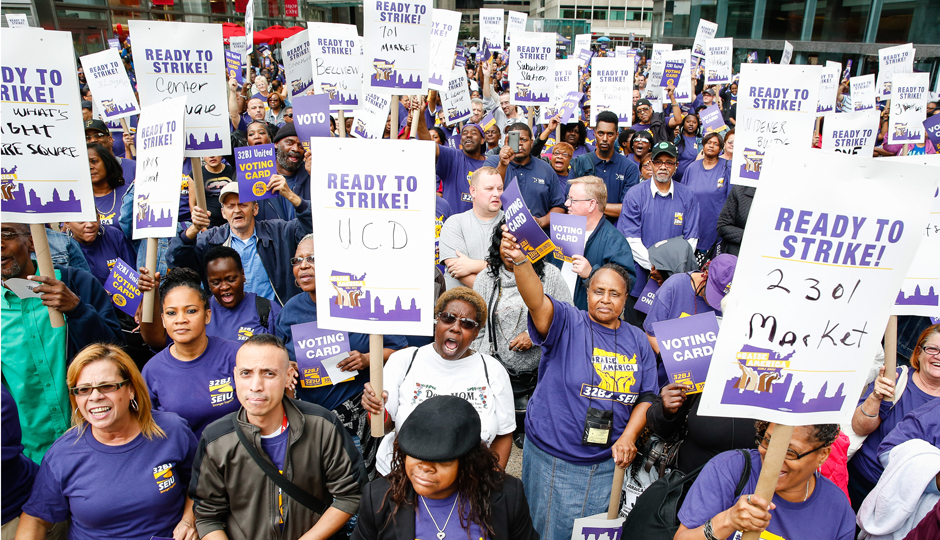 Following years of worker protests and strikes, airline contractors at the Philadelphia International Airport have finally agreed to begin contract negotiations for about 1,400 subcontracted service workers through 32BJ SEIU.

Back in April, the subcontracted employees voted to join 32BJ SEIU but their employers — PrimeFlight and Prospect Airport Services — both American Airlines subcontractors, refused to honor their wish to negotiate a union contract. But now, the new first of its kind agreement announced on Tuesday recognizes the group of cabin cleaners, sky caps, baggage handlers, line queues, and wheelchair attendants as members of 32BJ SEIU, and calls for bargaining to commence.

“As a Councilman, I was moved by the stories of those airport workers who have struggled because of inadequate pay. They, alongside SEIU, deserve a big round of applause for getting us to today,” said Mayor Kenney at City Hall on Tuesday. “I also want to congratulate American Airlines for helping broker negotiations between SEIU and the subcontractors.”

American Airlines vice president of government and airport affairs Michael Minerva joined Mayor Kenney at City Hall on Tuesday. “American Airlines respects the right of employees and workers to organize,” he said. “We were happy to help facilitate the discussions in order to secure labor peace and continued operational integrity at the Philadelphia International Airport.”

"We believe in collective bargaining & a fair wage 4 our direct employees & those of our contractors" @AmericanAir Mike Minerva #phldeal pic.twitter.com/jDSayutSzM

Over the past four years, the PrimeFlight and Prospect employees have complained of low, inadequate wages and poor disciplinary and sick pay systems, among other things. Last summer, airport workers went on strike just days before the Democratic National Convention. Though they planned to strike during the national event, American Airlines managed to avert the strike. Similar tensions arose this summer when workers threatened to rally while on the clock.

“We commend American Airlines for bringing their contractors, PrimeFlight and Prospect to the table and working towards an equitable resolution for all parties,” said 32BJ SEIU president, Hector Figueroa, in a statement. “This is an important moment in the national campaign to win dignity and respect for the thousands of contracted airport workers across this country.”