After calling off a strike earlier this week, workers prepare for another on Thursday if talks with American Airlines fall through. 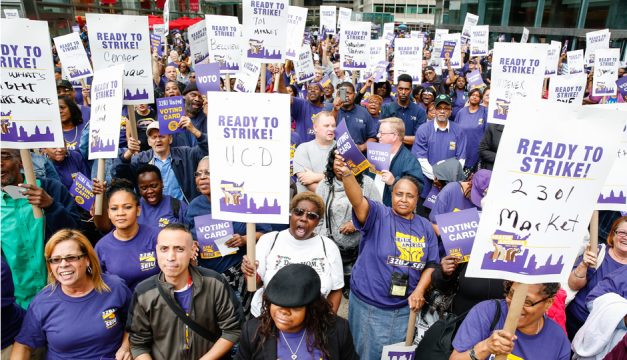 Hundreds of Philadelphia airport workers are prepared to rally at noon today to demand a favorable resolution to ongoing talks between the airport workers’ union 32BJ SEIU and American Airlines.

Airport employees hired by two of American Airlines’ primary contractors, Primeflight and Prospect Airport Services, first announced a strike on Tuesday, but held off after American Airlines agreed to enter into last minute talks on Wednesday morning. As negotiations over the union’s right to bargain a contract continue, PHL’s workers are prepared to strike if negotiations stall.

“They are willing to do whatever it takes to win, whether that means walking off the job or giving American Airlines the chance to make things right,” said union vice president Rob Hill. “If these talks break down, we are prepared to strike at any time.” The outcome of the negotiations will also affect union workers at Newark, LaGuardia and JFK, all of whom have long been frustrated with the state of their contracts. The possible strike would likely occur at all four airports.

Last April, PHL’s skycaps, wheelchair attendants, cabin cleaners, and baggage carousel luggage handlers voted to affiliate with the SEIU Local 32BJ union. The vote was thought to be a huge victory for involved workers, most of whom have fought for years for the right to negotiate a living wage and other workers rights. Months later, frustration has grown as Primeflight and Prospect continue to block the union from bargaining a first contract, representatives say.

Members of the clergy, immigrant justice groups, elected officials, and other supporters from the Philadelphia community are expected to join the workers today if they do move forward with a strike. It is unclear how the strike will affect airport operations. Philadelphia magazine reached out the Mayor’s office for comment on the discussions. A spokesperson for the city said the administration will release a statement later today.

This is not the first time PHL’s workers have gone on strike. One year ago, while still fighting for the right to unionize, workers orchestrated a massive strike that coincided with the Democratic National Convention.