This morning's announcement from National Real Estate Development marks the next step on the hometown favorite convenience store's march back into Center City. 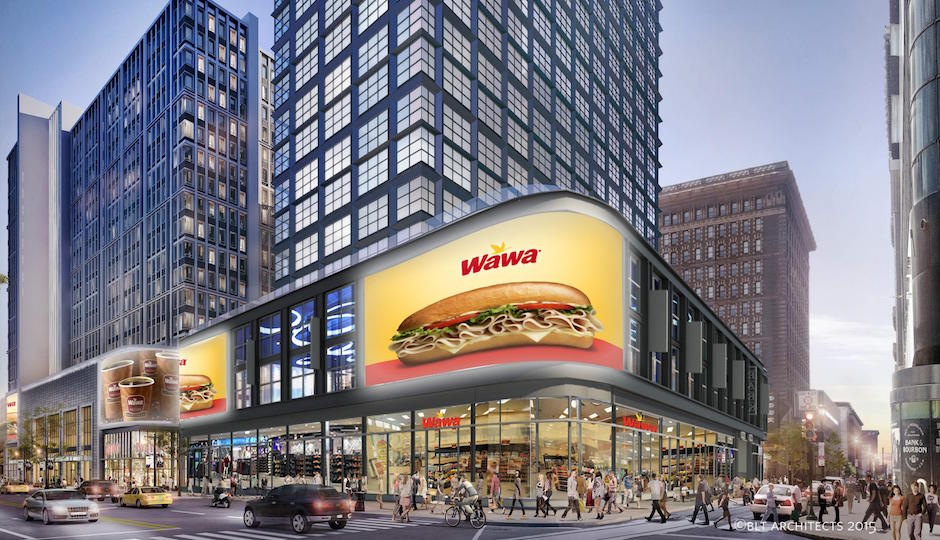 Remember when Wawa stores were thick on the ground all over Center City and adjacent neighborhoods?

Looks like they will be once again, for this morning, in a news conference fueled by plenty of free Wawa coffee, officials at National Real Estate Development (National Development) announced their latest tenant signing for the retail portion of the East Market project: a Wawa store to go on the 12th and Market corner.

“We are delighted that Wawa, one of the most beloved brands in our region, will be our next partner in reshaping the East Market neighborhood,” Daniel Killinger, National Development’s managing director, said in a news release. “Together, with all of our tenants, we are creating a dynamic urban neighborhood, transforming Market Street with active ground floor retail tenants. Wawa is a perfect anchor for East Market on Market Street.”

Killinger explained in an interview that National Development had been discussing with Wawa the prospect of its becoming an East Market anchor since last fall. “We knew Wawa was in the market [for Center City Philadelphia locations] for some time,” he said. The convenience store chain based in the Delaware County community of the same name inked the lease with National Development a few months ago; the announcement was timed to fit in with Wawa’s schedule of new store opening announcements.

Wawa is the fourth retail tenant to commit to space at East Market. The first, MOM’s Organic Market, is close to opening at 11th and Ludlow. Other tenants announced to date and their locations: Design Within Reach, across Ludlow from MOM’s Organic Market, and Iron Hill Brewery and Restaurant, on the east side of the internal promenade from Market to Ludlow at the Market Street corner.

“There are a few other tenants in the works that we look forward to announcing soon,” Killinger said. “We think we’ve identified the tenant for the 11th and Market corner, and we expect to announce that shortly, and we’re looking for the right tenant to go in opposite Iron Hill.

“It comes back to the original vision, which is that we’re going to activate our stretch of Market Street with best-in-class national and regional retailers. Ludlow Street, the village part of our project, we will fill with local stores.” The entrances to both residential towers and the office building will be on Ludlow. “We couldn’t think of a better anchor for one of the most prominent corners of our development.”

When he asked how he would respond to possible critics who might complain about the relative merits of a convenience store over, say, a high-fashion retailer at such a prominent corner, as some did when Wawa opened the first of its new crop of Center City stores at the southeast corner of Broad and Walnut streets last fall, Killinger responded, “I would ask them if they’re from Philadelphia.

“I’ve been going to Wawa my whole life,” he continued. “I need one near my home and I need one near my office.” National Development maintains a temporary office in the Stephen Girard Building and will move to the 1100 Ludlow office building when it is complete.

The new East Market Wawa store will be the eighth Center City location for the chain and the fifth in its current expansion drive. Two of the five new stores are already open: the Broad and Walnut location, which opened in September 2015, and the chain’s largest in-city store, at 1900 Market, which opened last December. Wawa announced two more Center City stores, one in the current I. Goldberg location at 1300 Chestnut and another at 22nd and South streets, on Wawa Day 2017 – the anniversary of the dairy’s going into the convenience-store business on April 16, 1964.

The East Market Wawa should open with the completion of the 1199 Ludlow Street apartment tower in 2018. By then we hope the hometown favorite and object of cult-like devotion will have gotten its hoagie mojo back.