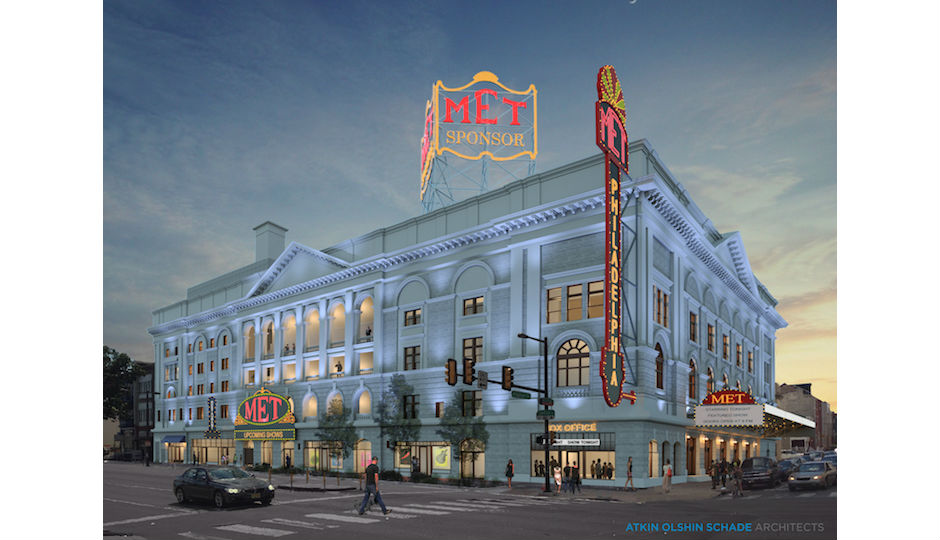 Somewhere in Heaven, Oscar Hammerstein is smiling: Eric Blumenfeld, who is currently restoring his Metropolitan Opera House at 858 N. Broad St. in Francisville to its original grandeur and acoustic quality, has landed a tenant who will program the facility: concert promoter Live Nation.

Used for years as the Philadelphia Orchestra’s recording facility and most recently occupied by the Holy Ghost Headquarters Revival Center, which owns the building along with Blumenfeld, the “Met” was built in an era when the city’s “new money” was flexing its muscle with grand mansions and more along this stretch of Broad Street.

Every one of those homes has now vanished, but the Met remains as a link to that opulent era. When it opened in 1908 as the Philadelphia Opera House, its seating capacity of more than 4,000 made it the largest performing-arts facility in the city, a title it will likely regain once the reconstruction is complete even with only 3,500 seats. The Metropolitan Opera Company of New York owned the hall from 1910 to 1920 and left its name on the building after it decamped. Since then, the hall has served as home to a wide spectrum of events, from movies to vaudeville to gospel and R&B performances to sporting events. It has long held a special place in the hearts of its neighbors and the larger North Philadelphia community, and the building is listed on the city, state and national historic registers.

Holy Ghost, led by its pastor, the Rev. Mark Hatcher, entered into a redevelopment partnership with Blumenfeld in 2012 after saving the building from demolition in 1997 and spending $5 million of its own money to prevent the structure from deteriorating further. Today’s lease signing marks a milestone in that partnership, which has had its ups and downs since Blumenfeld entered into it.

In addition to hosting concerts and performances, the Holy Ghost church will return to its home since 1997 for Sunday services once the restoration is complete.

“This is a true community enhancement project,” said EB Realty Management Vice President Chris Cordaro. “Francisville will also be utilizing the building as their ‘Town Hall’ when available.”

Blumenfeld and all the other parties involved gushed about the deal in a news release.

Blumenfeld, who is also restoring the Divine Lorraine Hotel three blocks south, said that the Met “is our secret weapon in the transformation of this great corridor and I am blessed with the opportunity of sharing in this vision with my friend and partner Rev. Mark Hatcher and the amazingly creative and dedicated folks at Live Nation and to have the continued financial support of Billy Procida and his 100 Mile Fund.”

Procida, whose company is bankrolling the $45 million Met restoration, was equally fulsome, saying, “Over the course of my career, I have built and/or financed over a billion dollars of development, and I can honestly say that working with Eric and Geoff to recreate the Metropolitan Opera House and the salvaging of the Divine Lorraine Hotel, as well as the opportunity of supporting Eric’s master plan for North Broad Street, are by far the most meaningful accomplishments in my 35-year career.

“Eric and I recently had the opportunity to tour the Met with some of the band members of The Grateful Dead, who also happen to be investors in my fund, and they were literally blown away by the aura of this great building. I can’t wait to see it after we put $45 million into its renovation. It’s going to be a real game changer!”

“Geoff” is Geoff Gordon, regional president of Live Nation in Philadelphia. His contribution to the praise festival: “I am thrilled and honored to collaborate with a true visionary in Eric Blumenfeld in doing something this special for my industry and this community. I literally wake up in the middle of the night with ideas on a regular basis, always thinking how amazing this place is going to be for the city of Philadelphia.”

Live Nation will add the Met to its already-extensive stable of concert venues in the Philadelphia area, including Fillmore Philadelphia in Fishtown, which opened in 2015, the Theatre of Living Arts on South Street and the Tower Theater in Upper Darby.

The restored Met is scheduled to reopen in September 2018. But don’t mark your calendars yet, Dead heads: there’s no word yet on who will christen the hall when it opens.

Claire Sasko contributed to this report.