9 Craft Breweries to Visit by Bike, According to Philly Cyclists

Whether you’re going on a short, leisurely ride or pedaling out to the ‘burbs, finish your route at these Philly-area breweries.

By Laura Brzyski and Amanda Paule· 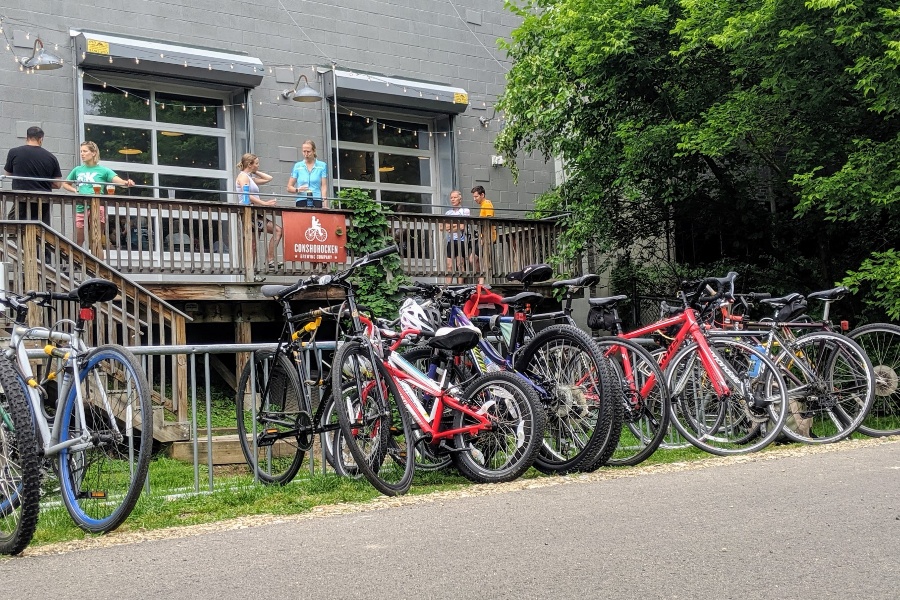 Philly is a hub for biking and craft-brewing alike. Here are local cyclists’ recommendations for breweries easily accessible by bike. / Photograph by Christian Betlyon.

With plenty of trails to explore, the Philadelphia area is perfect for both cruising paved paths and training over hills and dirt. Regardless of your preferred terrain, all that pedaling calls for a refreshing post-ride brew. Although the Philly region spoils us with so many breweries, some of them are easier to access by two-wheeler than others.

That’s why we chatted with a few local cyclists who have led or have participated in brewery rides — or who just love to sip on a cold one after getting in those miles. And folks, make sure to save the drinking for the end of your ride. If you can’t, give yourself ample time before hitting the road, as cycling (like driving) under the influence is prohibited by state law.

Conshohocken Brewing Company is a beer-loving cyclist’s dream. Situated right off the Schuylkill River Trail, the brewery and tap room’s original location is “about a 12-mile ride from Center City, perfect for a light workout rewarded by a beer,” says Jonas Oesterle, manager of and tour guide for Philly Bike Tour Company. Conshohocken Brewing Company features 11 beers on tap, three poured from a can, a menu of snacks (think: small bites and hot dogs), plus an outdoor deck overlooking the trail and bike parking. You might even consider the tap room’s curbside pickup for four packs to bring your loot home for some post-ride revelry. Even better: The brewery is dog-friendly, so bring your furry companion in a bike cargo trailer.

If you’re looking to venture a bit farther by way of the Wissahickon, aim to land at Forest & Main Brewing Company in Ambler. Jeff Appeltans, founder and owner of GoCycling, suggests biking Forbidden Drive until you get out to Northwestern Avenue. “As you continue on, you’ll meander through Fort Washington,” he says. “On your route toward the Green Ribbon Trail, give yourself a break and make a pit stop at Forest & Main.” There, you can choose from a wide selection of beer (including non-alcoholic!), or opt for a cocktail, zero-proof drink, or glass of wine. Forest & Main doesn’t serve food, but you’re welcome to BYO or order takeout from nearby restaurants.

Isaac Denham and Victoria Edwards, owner and manager (respectively) of Befitting Bicycles in Wayne, recommend hitting Sly Fox’s taphouse at The Grove in Malvern. They say it’s less than half a mile off the Chester Valley Trail — meaning folks coming from King of Prussia or Exton don’t have too far to go — and makes for “an easy and mostly car-free bike ride.” The taphouse features indoor and outdoor seating, and an abundance of on-tap and canned beer, plus a great pub menu.

Manayunk Brewing Company is located at the southern end of the Manayunk Canal Towpath, which is part of the greater Schuylkill River Trail. According to Oesterle, a trip to the brewery is good for bikers from various area locations. “It could be a quick, four-mile ride from Center City, or a nice, longer ride (about 18 miles) from Valley Forge or the western suburbs.” Once there, head to the outdoor patio with views of the Schuylkill to enjoy a brew of your choice — the tap list features everything from IPAs to sours — and a dish off the extensive food menu. (We’ve always been a sucker for their sushi.)

Appeltans, who has led several bike rides during past Philly Beer Weeks, raves about Phoenixville, as it’s easily accessible from Valley Forge Park. “[The town is] great for beer tours. It’s a destination location where you don’t even have to get on main roads.” He recommends hitting Root Down, which is mere feet from the Schuylkill. The brewery’s vibe is historic meets urban with exposed brick, high ceilings, graffitied walls, and Wu Tang-esque playlists. For an option with outdoor seating, it’s a three-minute trail ride along French Creek to the Root Down Biergarten. Not only are Root Down’s beers refreshing, but both the brewery and the biergarten are open seven days a week.

Yards is a consistent favorite among Philly cyclists, including Lucas Drecksage of Philadelphia Bikesmith & Main Line Cycles, and national cycling organization Bikes and Beers. Although you’ll have to navigate city streets, the Northern Liberties brewery and taproom is worth all the potholes you’ll likely encounter. Yards has bike racks and outdoor patio seating, so chain up wherever you prefer before enjoying a tasting flight or refueling with a dish from the pub-style menu.

Maybe you’re tired of trail-riding and need something more concrete (pun intended). Appeltans advocates pedaling across the Ben Franklin to get to Tonewood’s Oaklyn location. About a 40-minute ride from Center City, the route to the 15-barrel brewhouse is actually fairly easy to navigate. Appeltans’ route looks like this: Cross the Ben Franklin Bridge into Camden and follow the perimeter of the Campbell Soup Company complex along Pine Street until you reach Magnolia Street. Make a left on Park Boulevard and take that to Kaighn Avenue, then turn left down to the Cooper River. After crossing the bridge, make a right onto North Park Drive, cross Route 130, and stay right over the bridge to continue onto South Park Drive. Take that to Browning Road until you hit Newton Lake Drive. Make a right, then left onto Route 30. Tonewood will be a few blocks away on your right.

Denham and Edwards also love La Cabra Brewing, and their bike shop was even sponsored by the local brewery before the pandemic. “Most of our rides ended with crowlers of IPAs from our buddies in “Beer-wyn.” La Cabra is nestled in town across from the Regional Rail station, and “their offerings are top-tier,” they say. The full-service brewpub in Berwyn has a bunch of beer on tap and an extensive food menu. You can also get four-packs and bottles to go, or get your crowler/growler filled.

Okay, so this is our pick. Just a five-minute ride from Yards, Love City will have your drink desires satisfied with a menu that includes beer (obv), cocktails (both boozy and zero-proof), wine, and cider. Sate your munchies with pretzel nuggets or bites from rotating on-site food trucks. Or, head to Love City’s new outdoor garden area right across the street; it’s open seven days a week!

This guide has been updated since originally published in 2019.