With an overarching goal to have a healthier mindset around nutrition, we're working on eating — and living — guilt-free. 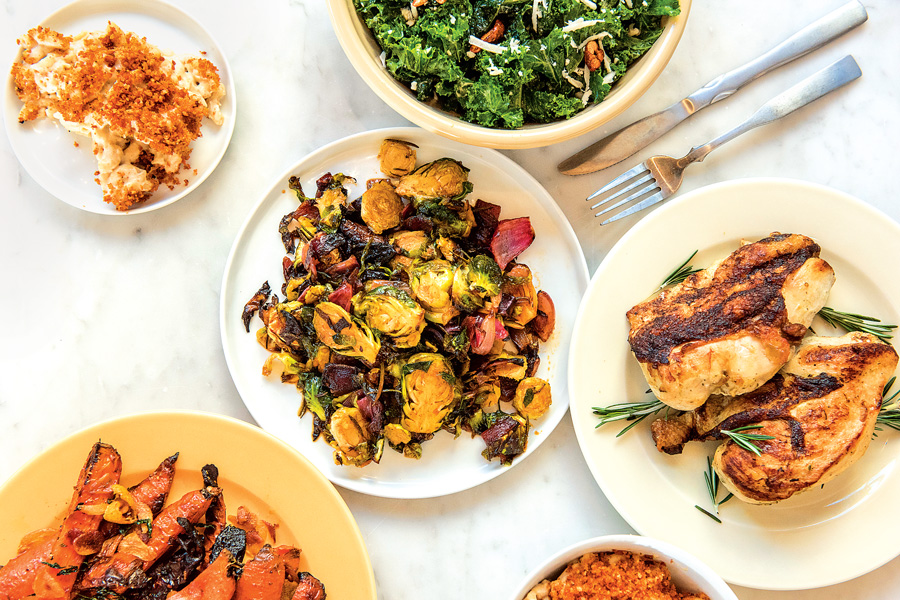 It’s 2004, and I’m celebrating my mom’s birthday in Northeast Philly with her six siblings and my 14 cousins. Our family is happily stuffing our faces with bubbling cheese pizza topped with sausage and mushrooms, lunch-meat-packed sandwiches from Marinucci’s, and hearty slices of Stock’s frosted pound cake. That is, everyone except the birthday girl. My mom is hunched over the kitchen counter, scribbling on what looks like a mini-golf scorecard. Next to her, a scant plate: a hoagie cut deliberately in half, and a few picked-off pizza mushrooms.

Though I didn’t fully know it then, this kind of relationship with food isn’t unique to my mom. Practices like counting calories and restricting portions pervaded the diet culture of the early 2000s. America was saturated with often-unsatisfactory weight-loss plans: Weight Watchers points were tallied religiously; devotees of the South Beach and Atkins diets requested bagels with the insides “scooped out.” Some people looking to lose weight may have seen success with these programs. But many didn’t — and, worse, many never learned the difference between nutrition and dieting. Despite some benefits, these plans never worked for everyone — or made everyone feel good — making the once-pervasive one-size-fits-all diet culture both frustrating and unrealistic.

Despite some benefits, these plans never worked for everyone — or made everyone feel good — making the once-pervasive one-size-fits-all diet culture both frustrating and unrealistic.

Diet programs have, thankfully, evolved since then, modifying their approaches to recognize that not all foods are created equal, nutritionally speaking. And of course, fad diets and calorie counting did (and continue to) work for some people — my mom, for one, who’s still tallying her numbers and eating half-sandwiches 20 years later. But over the decades, others became hungry for something new: an approach to nutrition that was not only less concerned with numbers and guilt, but more intuitive, personalized and practical.

In 2009, Whole30 emerged as an elimination diet: a method that involves removing certain food groups — dairy, legumes, grains — for a short period of time, then reintroducing them one by one in order to determine which might be causing GI distress, low energy or stress. It wasn’t perfect, but this approach did shift American nutrition culture slightly. “Diet” was no longer strictly synonymous with “weight loss,” according to Theresa Shank, a licensed registered dietitian and owner of nutritional counseling service Philly Dietitian. “Whole30 made people think about how food choices impact their nutrition, digestive health, mental health and overall wellness,” says Shank. “People went from being hyper-focused on calorie counts to taking a closer look at ingredients and quality.”

It was around this time that many dietitians started changing their approaches, too, guiding clients to consume nutritionally dense food in order to boost health and reduce disease risk. “Intuitive eating,” or being mindful of and listening to your internal hunger cues, started to rise in popularity as well. Beth Auguste, a registered dietitian nutritionist and founder of BeWell with Beth, says that in the past decade, when clients started asking how to lose weight, she started asking why: “It became important to find out what was really at stake for that desire, because it was usually rooted in another aspect of their general health,” says Auguste.

It was becoming more widely known that everyone’s body responds differently to food, even if we’re all eating the same things. That means we can’t all follow the same cookie-cutter nutrition plan — and even if we did, we wouldn’t all look or feel the same. Rather than logging each and every food item consumed throughout the day for the purpose of “making” the weekly weigh-in, folks were becoming more in tune with their bodies, figuring out which ingredients agreed with their own digestive systems, and embracing the notion that “healthy” can be defined in a multitude of ways — not just by weight and size.

People were focused on coping with stress and how it can directly impact your consumption — like emotional eating or food avoidance.

In 2010, Michelle Obama launched the Let’s Move campaign, which encouraged families to make healthier food choices and keep kids active. The campaign successfully advocated for the passage of the Healthy, Hunger-Free Kids Act, which, according to public health writer Steven Ross Johnson, “allowed the U.S. Agriculture Department to set new nutritional standards for all food sold in schools for the first time in more than 30 years.” It called for, he continued, “increased servings of fruits, vegetables and whole grains in meals.” Encouraged to adopt an abundance mind-set over an avoidance outlook, Americans were slowly learning that adding more greens and nutrient-dense grains into our diets — rather than totally forgoing foods typically villainized in diet culture, like white bread, rice and pasta — would help us feel better, longer.

Philly embraced these trends, too. In 2010, the city’s Department of Public Health, in conjunction with the Food Trust, debuted Get Healthy Philly and its sub-initiative, Philadelphia Campaign for Healthier Schools, thanks to more than $20 million in grants from the CDC as part of a program focused on community-based preventative health care. The two initiatives sought to help Philadelphians make more informed food choices and view wellness as a celebration of healthy living, says Jiana Murdic, the founder of wellness organization Get Fresh Daily, who worked on a campaign called HYPE for the program. (Read more about how she expanded health and nutrition education and founded Get Fresh Daily here.)

Now, in 2020, it’s apparent that the city’s eating scene has capitalized on the plant-forward trend. Farmers’ markets and community gardens are booming; HipCityVeg slings plant-based burgers and sandwiches, and spots like Blackbird Pizzeria in NoLibs and West Philly’s Veganish are making vegetarian and vegan lifestyles more mainstream. The impact of these evolving perspectives can also be seen in Philly’s exercise scene. It’s a slow road, but: “In 2010, fitness and nutrition were very segmented,” says Britney Kennedy, founder and CEO of OnPoint Nutrition. “You went to the gym to work out, and instructors approached exercise as a way to burn calories. That has changed, especially in the past five years. Studios now seem more committed to clients’ overall health and happiness, promoting exercise as a means to feel good — no matter what kind of body you’re in.” 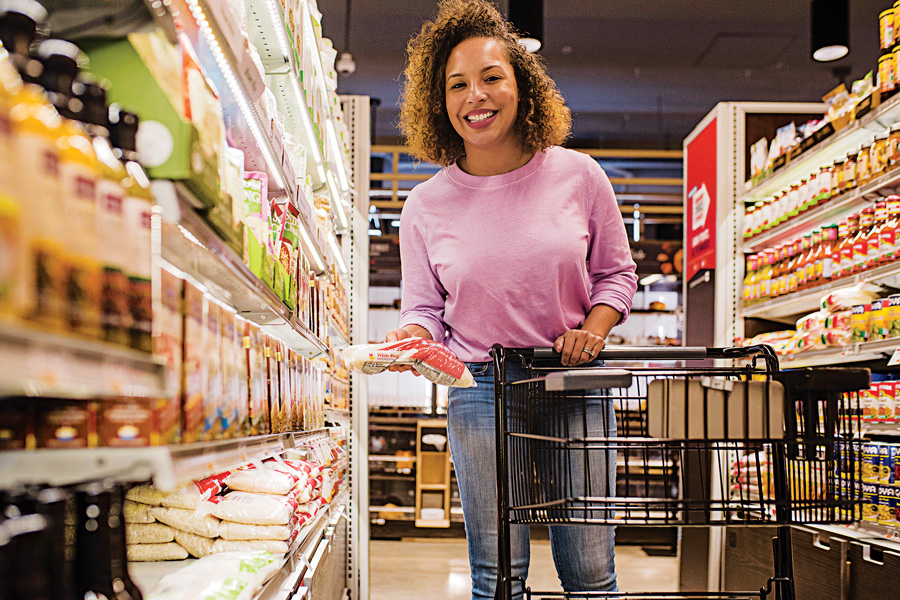 Registered dietitian Dalina Soto encourages her clients to be flexible with their nutrition planning and grocery shopping. | Photograph by Heather McBride

In 2020, Auguste noticed many clients investing in their mental health alongside their nutritional plans. “People were focused on coping with stress and how it can directly impact your consumption — like emotional eating or food avoidance,” she says. The pandemic also amplified the city’s long-existing divide between “those who can access a variety of foods and have the freedom to choose what they’re eating, and those who lack food access and nutritional autonomy,” says registered dietitian and Nutritiously Yours founder Dalina Soto.

For years, Philadelphia, the poorest major city in the U.S., has struggled with with food security. From 2015 to 2017, according to data from the USDA, 302,685 city residents — one in five — were deemed “food insecure.” And data from the 2019 Neighborhood Food Retail in Philadelphia report revealed that lower-income neighborhoods suffer from an oversupply of food high in sugar, salt and unhealthy fats, making it more difficult for residents of these neighborhoods to obtain groceries that support long-term health. Organizations like the Food Trust and Philabundance are working to change this reality. They, along with groups like the Share Food Program and chef-led Everybody Eats, among many others, distributed boxes of healthy food to residents during the pandemic to mitigate this issue, but more significant long-term efforts need to come from policy changes at a government level.

“Ask questions like, ‘Can you cook?’ ‘Where do you get your food?’ ‘What factors impact your inability to access a grocery store?’ And then adapt nutritional plans.”

Soto believes nutritionists can also help alleviate nutritional challenges by meeting clients where they are. In a city like Philly, she says, “Ask questions like, ‘Can you cook?’ ‘Where do you get your food?’ ‘What factors impact your inability to access a grocery store?’ And then adapt nutritional plans.” Soto, who works with folks who live in low-income neighborhoods, reminds her clients that healthy food doesn’t have to be expensive and that fresh isn’t necessarily “better” than frozen or canned. “The goal is consuming a variety of nutrient-dense foods in order to support long-term health,” she says.

All in all, eating healthfully in 2020 has come to mean living healthfully — pursuing a lifestyle that satisfies your mental, physical and emotional health. Our experts have seen more people intuitively eating and rejecting the diet mentality. Though intuitive eating doesn’t account for underlying health or medical conditions that might impact a person’s eating habits, it can help folks (especially those who don’t see a nutritionist) avoid feeling guilty, pressured or restricted when it comes to food. (Here are some easy-to-implement at home nutrition tips from local pros.)

“The goal is consuming a variety of nutrient-dense foods in order to support long-term health.”

This anti-diet approach aligns with the newly popular framework Health At Every Size (HAES), which views health and wellness in inclusive, non-stigmatizing ways. Jenny Weinar, a licensed clinical social worker and therapist specializing in disordered eating and body image, says that HAES not only neutralizes weight in conversations about health; it also “encourages health-promoting behaviors like joyful movement and intuitive eating, regardless of their outcome on weight.”

So where is Philly’s nutrition scene headed? Registered dietitian nutritionist Liz McMahon believes home cooking is here to stay, but healthy meal-delivery services will skyrocket — we can’t all be home chefs 24/7! Shank sees a deeper awareness of the connection between food and emotional health: Those modifying their diets these days might not be interested in losing weight, but instead determined to feel less sluggish and more alert during the workday. And with the overarching goal to have a healthier relationship with our eating habits, Soto hopes more people will stop banning certain foods (white rice! Pasta! Pecan freakin’ pie!) in order to eat — and live — guilt-free. See ya, celery juice.

This story was originally published in the Be Well Philly 2021 print issue as “Our Plates, Evolved.” A quote from Jenny Weinar has been updated for accuracy. To request a complimentary copy, follow this link.