Everything from Chinese food to "cheesesteaks" is on the menu during this meat-free extravaganza. 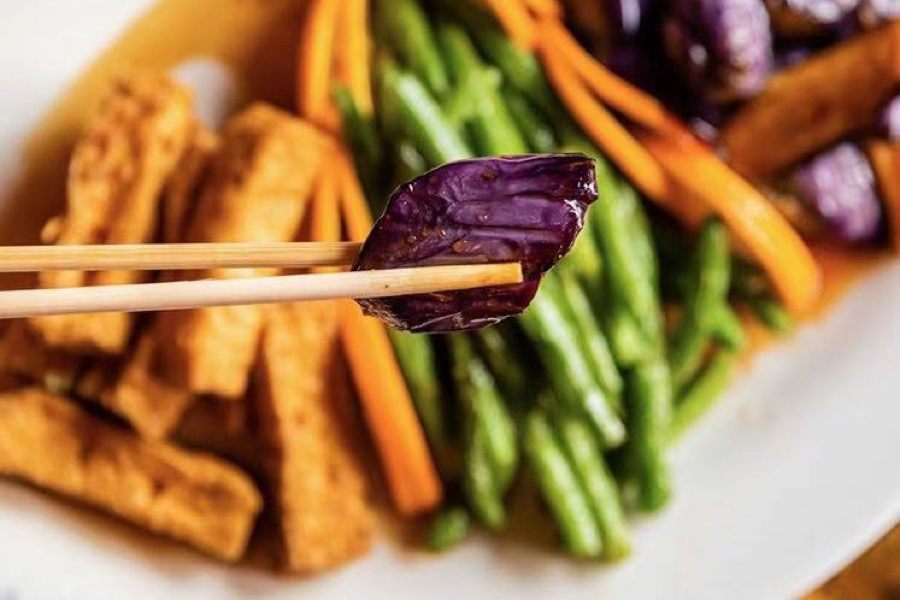 Who says Vegan Restaurant Week, held from October 13th to 19th this fall, is just for vegans? In fact, the sheer amount of delicious meat-free food during this popular week can easily serve as the gateway for eating fewer animal products. If you’re a steadfast carnivore whose friend or partner is begging you to try some vegan substitutes, we’d suggest checking out these five places first.

If you like Thanksgiving dinner: Go to Tattooed Mom

Juicy “meatloaf” is the star of this vegan mainstay’s Thanksgiving-leftovers-style sandwich — a special entrée just for Philly Vegan Restaurant Week. Meatloaf made with Beyond Meat crumbles is layered with mashed potatoes and mushroom gravy on a Brioche bun, all of which makes for a sloppy smorgasbord of flavor. Maybe if we beg the South Street bar, it’ll bring back this inventive sammy for the holiday next month.

If you like fondue: Go to the Melting Pot

If you’re one of those people who’s delayed going vegan purely because you can’t not eat gooey, melted cheese, this one’s for you. For the fall edition of Philly Vegan Restaurant Week, the King of Prussia location of the well-known chain is breaking out the “cheddar-style” fondue as well Gardein beefless tips and Kite Hill ravioli made with almond milk ricotta to ensure you get the same elegant experience as meat and cheese eaters.

If you like Happy Meals: Go to Luhv Vegan Deli

No matter how old you get or how healthy your diet becomes, I’d argue there’s some nostalgia for the days when a McDonald’s burger and fries, paired with a tiny plastic toy, could make your day. Thanks to Luhv Vegan Deli, we now have a grown-up (and, of course, vegan) version of that experience: a black bun burger with vegan cheese, lettuce, tomatoes, onion, pickles, and a dairy-free Big Mac sauce. It all comes complete with a side, a drink, and a secret item because what’s a Happy Meal without a surprise?

If you like General Tso’s chicken: Go to Su Xing House

Instead of offering special menu items, this always-meat-free restaurant in Center City is playing by the rules of a typical restaurant week: You can try more of its standard delicacies for less money during next week only. That means three courses of classic Chinese-American dishes — spring rolls, dumplings, miso soup, Peking “duck,” assorted vegetables, and, of course, General Tso’s-style seitan with a spicy sweet and sour sauce.

If you like cheesesteaks: Go to Avenue Cup Cafe

A post shared by Philly Vegan Restaurant Week (@phillyveganrestaurantweek) on Oct 4, 2019 at 9:22am PDT

On October 17th only, from noon to 9 p.m., Queen Village’s Avenue Cup will serve a $35 prix-fixe three-course vegan menu, starting with cheesesteak rolls and ending with a peanut chew sundae. What’s in between is up to you; choose between a seitan cheesesteak, a “chicken” cheesesteak, a chickpea meatball sub, eggplant parm, a banh mi, or a roast “pork” sandwich to make all your meaty dreams come true — except without the meat.