14 Tips to Make Your Bike Commute Through Philly Safer

We turned to top Philly cyclists to find out how they make biking in the city less scary. 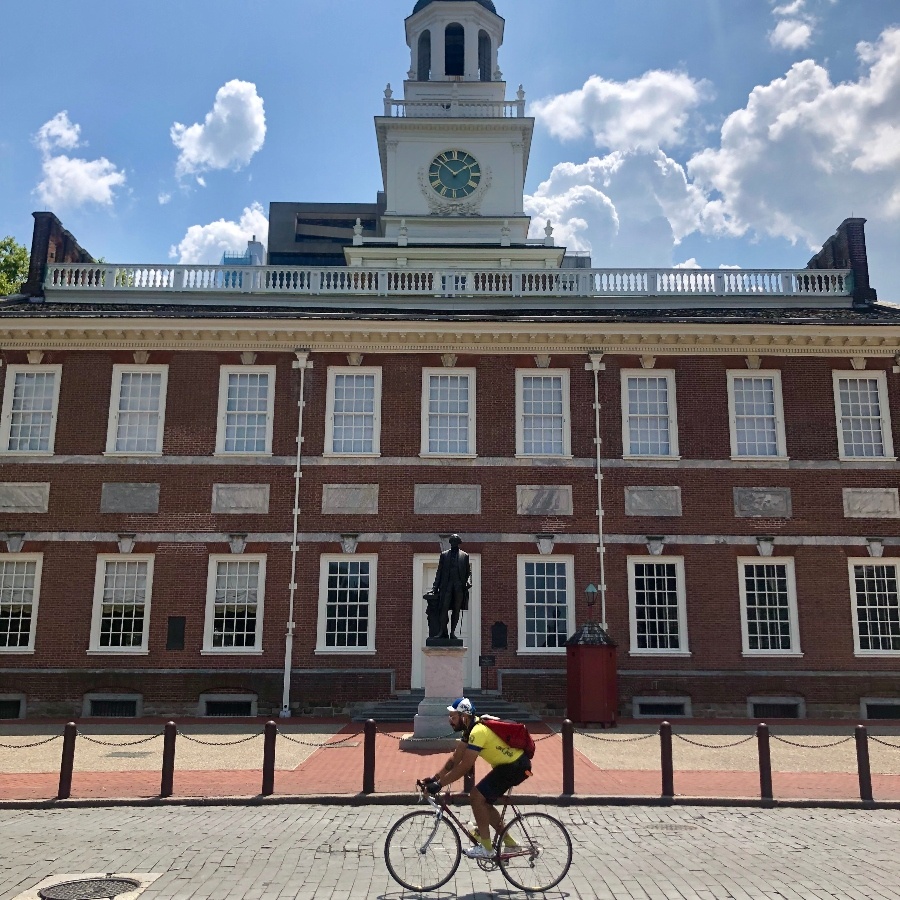 Wary about attempting a bike commute on Philly streets? We asked local cycling pros for their advice on smarter and safer city riding. / Photograph by Elizabeth Rowe.

It’s no secret that Philly is a huge city for bike commuting. Not only is it a quick way to get around town, but riding your bike is more sustainable and more cost-effective than traveling by car or public transit. But biking through city streets isn’t always easy — you’ve got unpredictable drivers to deal with, buses to dodge, trolley tracks to avoid. Plus, not every street has a designated bike lane, making commuting alongside traffic pretty intimidating.

That’s why we turned to the pros of city cycling — tour guides, store owners, and club leaders — for their advice on how to be smart and safe while biking through Philly. Whether you’re new to city streets or are a seasoned rider, these tips will (hopefully) make your bike rides a breeze.

“Before you ride to work, school, or your desired destination, do a test run on a weekend day. Figure out the best streets or trails to get to where you need to be. Streets to look for: those with heavy bicycle usage (the herd knows best), and those with bike lanes or lower travel speeds. We also have a regional bike map for cyclists to use in order to help plan their course.” — Stephanie Fenniri and Brenda Hernandez-Torres, Education and Social Impact Director and Community Engagement and Partnership Coordinator (respectively) of the Bicycle Coalition of Greater Philadelphia

“I would advise cyclists to choose their route carefully. This might be common sense, but if you don’t give it some thought before you start riding, you can end up on a street that’s less than ideal. Broad Street and Market Street east of City Hall are examples of streets to avoid because they are streets on which you’ll experience a lot of [unannounced vehicle] lane changing. Other streets are less obvious, but because Center City is a grid, there’s always a close parallel street to choose instead.” — Jonas Oesterle, tour guide for Philly Bike Tour Company

“There are lots of bike lanes in Philly, so use them for your commute, even if it sends you a few blocks out of your way. For example, make your way over to Pine Street rather than going down South Street. A great resource to help plan your route is this bicycle map.” — Mark Featherman, President of Guy’s Racing Club

“The advice I always give new riders — but goes to seasoned riders, as well — is to not be afraid to be assertive (which is not the same as being aggressive!). Some people have a tendency to feel timid about riding in the road and feel safer in the shoulder or parking lane when there aren’t cars there. The problem lies when you need to merge back into traffic. I think it’s safer to take your place in the lane and stay there, rather than constantly try to merge in and out of traffic.” — Shelly S. Walker, owner of Fairmount Bicycles

“‘Taking the lane’ means riding in the center of the lane so cars do not try to pass you in a single lane without enough room. Legally, vehicles must give a cyclist four feet of space in order to pass. Unfortunately, very few motorists follow that law. If there are two lanes on a street, taking the lane encourages vehicles to go all the way into the other lane in order to pass. When you’re taking the lane on a single lane street, you may want to let a car pass, but that’s your personal choice. You are entitled to a full lane, so use it.” — Oesterle

Watch out for car doors

“If you are riding down a street with cars on it, pay attention to who just parked. Look for brake lights — there is a good chance that person is going to open their door and you want to avoid that! Also, do not ride right next to parked cars. Give yourself a few feet between yourself and the cars. Getting doored sucks!” — Brian Hackford, owner of Keswick Cycle

“I’d say the biggest risk of riding in the city is car doors opening in your path. That’s something for cyclists to just be aware of and something motorists can actively work to make better by being conscious of their surroundings when opening doors (like looking over their shoulder — a.k.a. the “Dutch reach”). —Mackenzie King, Mechanical Service and Retail Sales at Cadence Cycling Centers

“It’s essential to be aware of your surroundings. We advise bicyclists to be visible and predictable, so other road users can see you’re there and know what you’re going to do next. For bicyclists, this means using lights at night, keeping a straight line in the lane, using hand signals when turning, changing lanes and stopping. Also, we encourage cyclists to use a bell, as they let both drivers and pedestrians know you’re there.” — Fenniri and Hernandez-Torres

“Never get between a car and a right-hand turn. That’s just calling for a collision. For instance, if you are going west on Spring Garden Street, pay attention to what the car in the lane next to you is doing when you get to 20th Street — assume the car is going to turn right, pull back and wait.” — Featherman

“[Even though illegal], texting and driving has now become an added distraction and safety concern for cyclists. It’s not a bad idea to ride with a flashing light or two on your bike even during the day to catch the attention of motorists.” — King

“The two biggest things to remember: (1) A bike is a vehicle, meaning the same laws that apply to motorists apply to cyclists; and (2) Ride on the right and in the same direction as traffic.” — The team at The Bicycle Club of Philadelphia:

“Do not ride on the sidewalk. It’s [not only] lame, but more dangerous than riding in the road. The sidewalk is for pedestrians. They don’t expect you there and cars don’t see you coming off the sidewalk into intersections.” — Hackford

“Always, always, always assume the driver doesn’t see you, even if you are locking eyes. Be attentive and in tune with your surroundings.” — Featherman