This Is What a Detox Juice Cleanse Is Really Like

From sporadic restroom trips to taste hallucinations, Ernest Owens' two-day Sip-N-Glo cleanse was quite the journey. 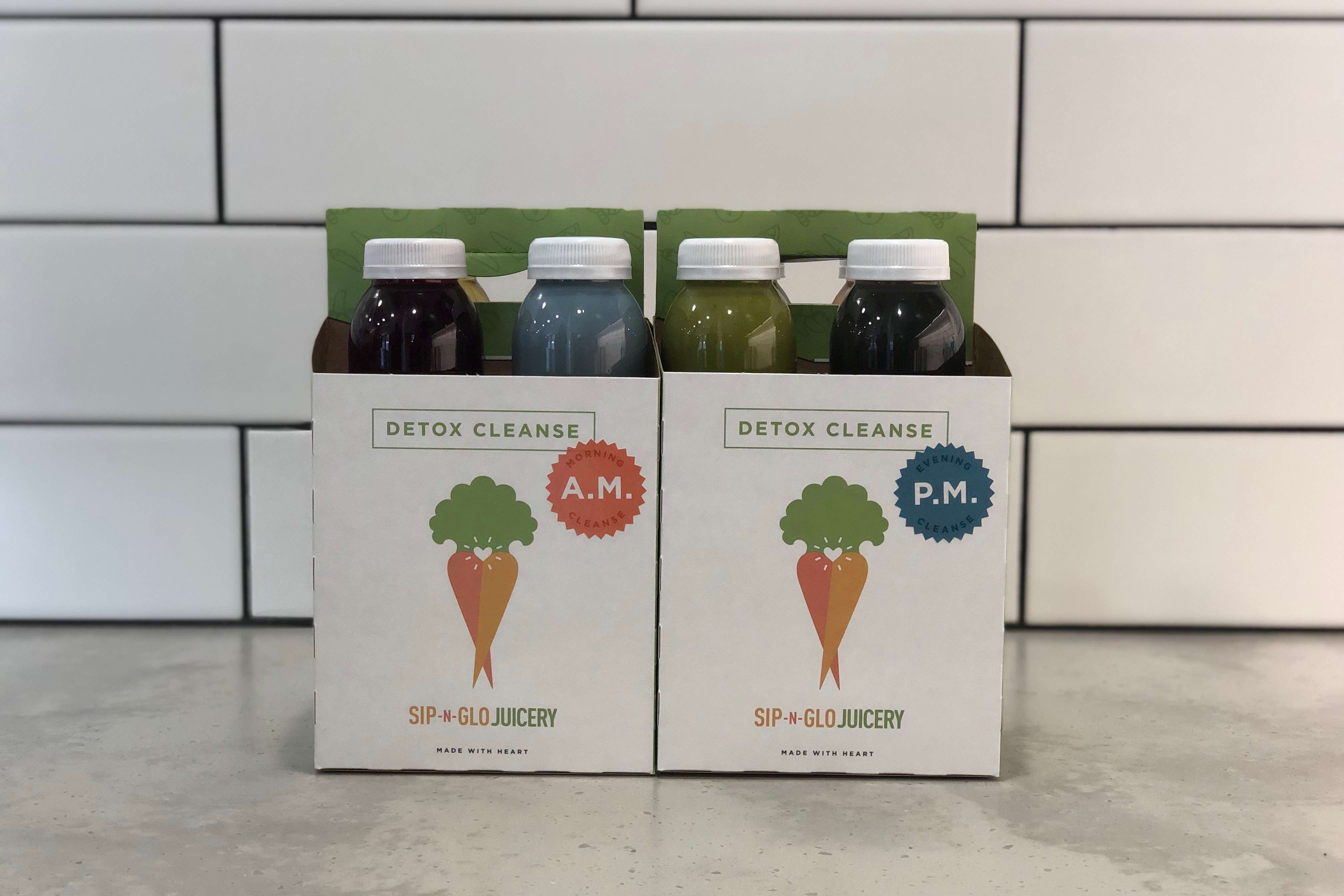 Note: Our I Tried It series represents contributors’ accounts of individual experiences. Be Well Philly does not recommend or endorse these products or practices. We advise you to consult with a dietitian and your doctor before undergoing any drastic changes in diet or exercise.

What I do: Writer at Large, Philadelphia magazine

What role healthy living plays in my life: Moderation has been my lifelong playbook. I strive to eat a variety of different whole foods and make it a point to sleep often and well. I don’t have any extreme diet or workout regimen, but I make it a point to drink lots of water and keep my stress levels low. I don’t smoke, I’ve never had a full cup of coffee in my entire life, and I really avoid fast food (unless it’s Wendy’s or Popeyes, my Kryptonite).

Why I decided to do a two-day juice cleanse: Because I felt like my body needed an upgrade before spring kicked in. In the past, I’ve heard mixed reactions about doing a juice cleanse (I’ve never done one before), and several friends told me about the intense experience developed by locally sourced juicers Sip-N-Glo.

What I know so far: “It’s not meant to be a crash diet,” Julia Feldbaum, general manager of Sip-N-Glo told me at the company’s Rittenhouse location. “Our juice cleanse is supposed to help re-center how you feel about food and what you choose to put in your body.” Since 2013, the super popular juicery has expanded to three locations across the city and has played a role in how we talk about wellness in the city today. “People are surprised when I tell them that we only use plant-based raw ingredients,” kitchen manager Morgan Malachi told me when I asked about the science behind Sip-N-Glo’s juice recipes. “Some of these ingredients combined can create a bold flavor — I strive to help create a juice that balances both the sugar and bitterness while still tasting great.”

What is the challenge: For two full days, I will partake in the eight-juices-a-day detox cleanse ($64.99 per day or $129.98 total). With the exception of water and herbal teas, solid foods aren’t allowed — only the 12-ounce bottles of juice (no alcohol either, damn). Sip-N-Glo also provides a recommended schedule of when to space out drinking the juices to maximize feeling full.

In other words, it’s showtime. My body is ready (so I hope).

ATTENTION: I have to let you all in on something… So this Friday & Saturday, I'm embarking on a two-day juice cleanse experiment from the good folks from @sipnglo! I've heard about the cleanse, never done one before and doing so — YOU, the reader — can know what it's truly like. In a nutshell, I'm only allowed to drink eight 12 oz bottles of the juice they provided a day. Nothing else except water. 16 bottles total for Friday and Saturday. I'll be documenting the experience for a story I'm doing for @bewellphilly next week! Until then, you can follow the journey in my Instagram story! #health #juicecleanse #spring #cleaneating

Sip-N-Glo recommends eating only raw fruits and vegetables the day before the cleanse, but I can’t quite resist munching on whatever the hell I want to. This is my last day of food freedom — I’m not going to give it all up. For compromise, I skip breakfast and drink water frequently throughout the day. I do this because I know that I’ll be indulging in some upscale finger foods and cocktails at a reception I’m attending in NYC. But I do stay true to eating light (even if it it’s not raw). I slowly begin to regret not having another slice of pizza earlier in the day, but it is what it is.

8:05 a.m. — I drink my first juice, the Radiant Glo. Not bad. Made of carrots, oranges, lemons, pineapples, turmeric, peach hibiscus tea, and açai, it’s a lovely jumpstart to my morning. I’m off to speak with students at Boys’ Latin of Philadelphia Charter School for its annual career day and feeling great.

9:30 a.m. — I’m drinking the Green Beast. It’s pretty much your typical green machine type of juice (kale, spinach, collard greens, green apple, cucumber, celery, lemon, ginger) with more zing on the green side. I tell the kids during one of the sessions that I am doing a juice cleanse, and they begin to tease me about the breakfast food down in the lobby for guests. It’s not even noon, and I’m already being tempted. Not fair, so not fair.

11:02 a.m. — I’m drinking the Heart Beet. It lives up to its name with a heavy dose of beet, carrot, apple, celery, lemon, ginger, and vitamin B12. Very strong and earthy drink that has a surprising balanced taste to it. I’m headed out of Boys’ Latin and ready to go home to make a special trip to a place in my house that has a shower, sink, and yes, that thing you sit on to let toxins out. I begin to understand what they mean by “cleanse.” I also begin to have regrets about not keeping light on the finger foods and cocktails the night before.

12:32 p.m. — I’m drinking the Vanilla Majik Pump Up. OMG, IT’S SO DAMN GOOD. Made with plant-based protein, Blue Majik (blue-green algae), vanilla bean, almond oil, dates, cinnamon, and almond milk, it’s the best thing I’ve had so far. It’s sweet, smooth, filling, and just simply delicious. I had to check the bottle twice to see if there was actually no dairy — yeah, it’s totally plant-based. I almost drank the next day’s bottle but then realized that I would be miserable tomorrow without any. Duly noted in the future.

Going strong! I just completed the first quarter of my juice cleanse! Sip N Glo got me moving! pic.twitter.com/tE9ZJvbpjs

2:01 p.m. — I’m drinking the Supreme Green. It pretty much tastes similar to the Green Beast except that it’s a combination of spinach, dandelion greens, romaine, green bell pepper, lemon, cucumber, celery, basil parsley, and e3live (more blue-green algae). It tastes how it sounds: like a forest with a splash of lemon. Drinking water in between these cycles has made it easier to cope with the fruitless drinks I must consume. Definitely felt the earth, wind, and fire during my second trip to that place in my house that has a shower, sink, and item that flushes things.

3:30 p.m. — I’m drinking the One Love. I’m noticing a pattern of good vibes after a previous intense round of juicing. The ingredients in this drink are comprehensible and chill — pineapple, apple, ginger, mint, cucumber, chlorophyll, and prebiotics. I feel refreshed, and I appreciate the taste more than I initially imagined.

5 p.m. — I’m drinking the Herb Garden Chilled Soup. If I wasn’t hungry, I wouldn’t even bother. Avocado, tomato, chickpeas, red bell pepper, lemon, basil, parsley, garlic, salt, black pepper, lemon thyme, and coconut water couldn’t save this uncooked concoction. I get it; bottled chilled soup is a thing, but it’s not my thing. I want so badly to heat it up and have it with some crackers. It feels odd drinking it chilled and reminds me of a V8. Of course, this would be the one that would send me back to the loo.

6:30 p.m. — I’m drinking the Pineapple Charcoal Lemon-Aid. My final juice of the day ends things on a sweeter note with its blend of pineapple, lemon, activated charcoal, aloe, and water. While my friends are still enjoying happy hour and my boyfriend texts me to see if I “haven’t given up,” I’m envisioning this juice as a cocktail within itself. I give myself a cheers to a day well done, even though I pray I don’t screw this up with late night munchies.

Day one of the Sip-N-Glo juicing cleanse is now in the books! Just finished my second round! pic.twitter.com/XZqAAiEnod

10:30 p.m. At a friend’s house, I almost order something from UberEats. I drink a bottle of water with my mind telling me to take my ass to sleep. My boyfriend and friends are enjoying my torture while they sip on homemade cocktails. One more day, I tell myself. One more day.

8 a.m. — Drinking the Radiant Glo this morning is a relief. My body craves something with flavor. Last night made me moody until I went to sleep. I was either having withdrawals or losing my mind. Water and this vibrant potion definitely help me forget the night before.

9:30 a.m. — Drinking the Green Beast, and it continues to live up to its name in more ways than one. I’m starting to notice a pattern in my bathroom trips: The greener the drink, the more often I frequent the loo.

11 a.m. — Drinking the Heart Beet as I head to Center City to host a media workshop. I’m really appreciating the taste and ease of this juice and feeling revived. People are telling me that they notice my glow, and I’m starting to feel better too.

12:30 p.m. — Drinking heaven, I mean the Vanilla Majik Pump Up. I can’t praise it enough — it’s hands down my favorite juice out of the entire cleanse set. I’m feeling fired up and ready to go. 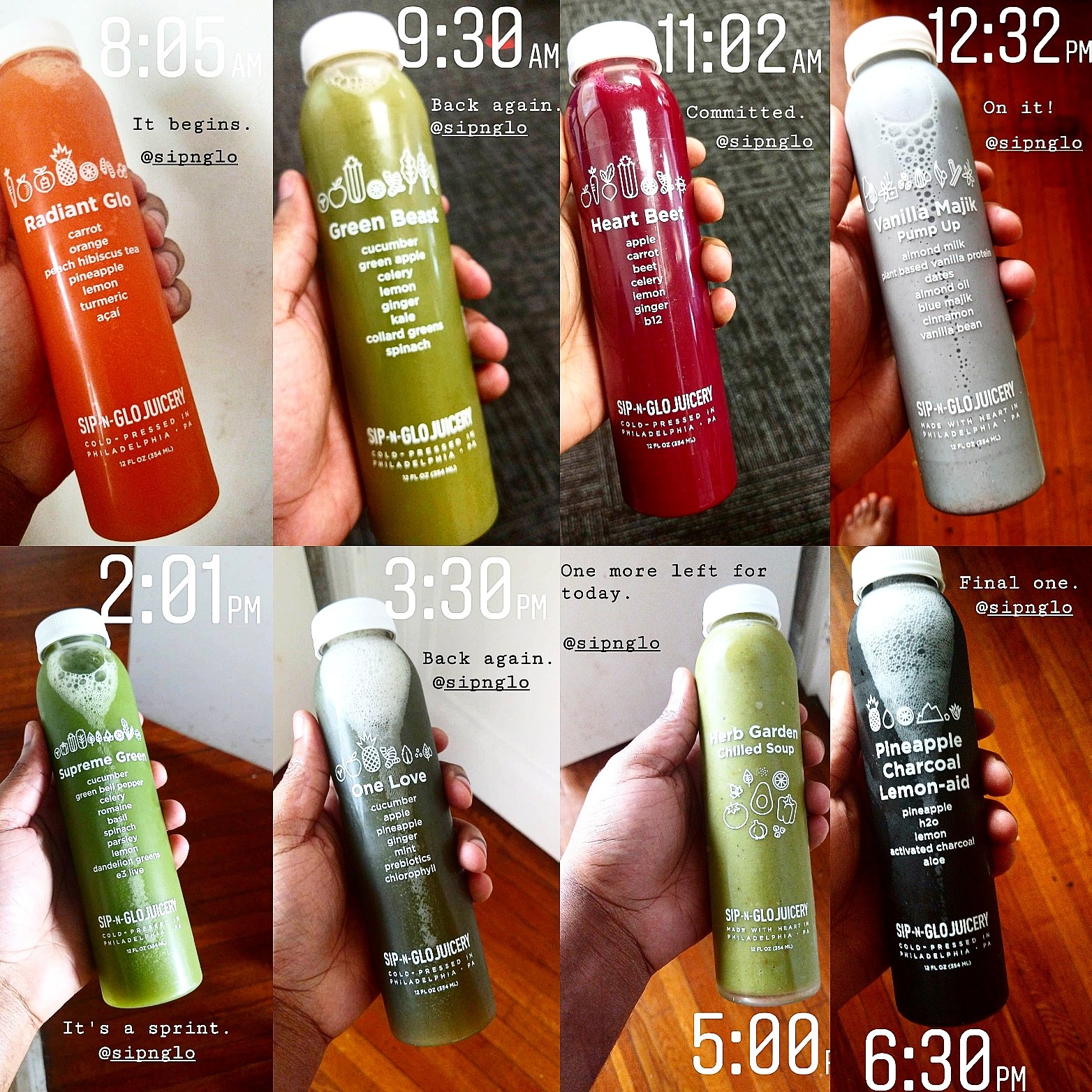 2 p.m. — Drinking the Supreme Green and it’s not so bad this time around. I feel like my tastebuds are awakening. Yes, I go to the loo, but honestly, I feel good. Like the James Brown “I Feel Good.”

3:30 p.m. — Drinking the One Love, and the good weather has me in a really vibrant mood. Friends are beginning to DM me and cheer me on as I get closer to the finish line.

5 p.m. — Drinking the Herb Garden Chilled Soup and feeling miserable as hell now. I WANT FOOD, and this juice isn’t cutting it. The zesty veggie taste is making me crave chips and salsa. I’m taking a nap before I end up eating something.

6:30 p.m. — Drinking the Pineapple Charcoal Lemon-Aid after a quick nap calms my nerves. With the last sip, the end and victory awaits.

10:30 p.m. — I feel better overall despite sporadic cravings. One moment I want a burrito with everything in it, the next I just want a simple fruit salad. I think I’m having taste hallucinations.

I’ve been taking it easy, but I feel so relieved. I will probably never take the taste of solid food for granted again — I’M JUST THANKFUL THAT I CAN NOW CHEW SOMETHING AGAIN. The first thing I eat is a fruit salad in the morning, followed by a well-deserved brunch in the middle of the day. But something is different. I find myself thinking more carefully about what I’m eating — I’m analyzing every bite, every sip, every nibble. It’s weird but sensible. I don’t find myself eating as much as I expected to. That “glow” everyone keeps noticing in my complexion is radiant, and I’m more invested in keeping it that way. I’m not as fatigued as I would typically feel after 5 p.m., and I don’t have the random cravings and sugar rushes I used to have in the past. Surprise, surprise.