Cecily Tynan Would Like the Body Shaming to Stop Already 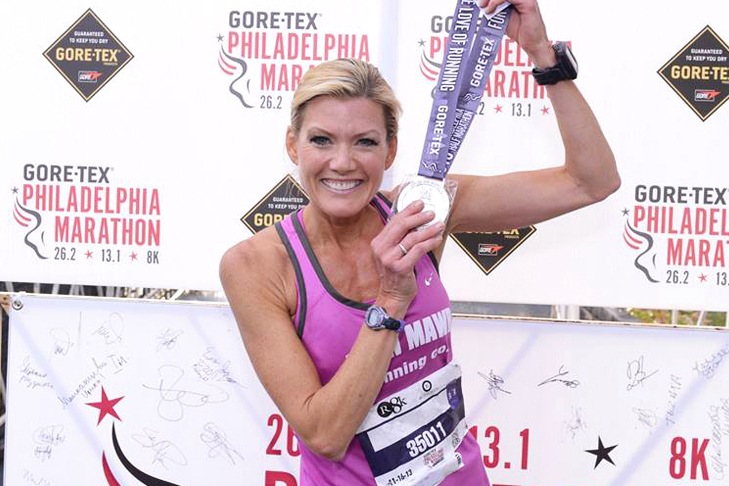 Cecily Tynan after a Rothman 8K | Photo via Facebook

It’s 2018, and somehow people still haven’t figured out that critiquing other people’s bodies is never, ever okay. And Cecily Tynan is over it.

The 6ABC meteorologist recently graced the cover of Real Woman magazine, a publication by Capital Health that’s distributed in the New Jersey and Philadelphia suburbs. In the accompanying article, Tynan discusses when her teenage self first fell in love with TV reporting, what it’s like to predict the weather, her passion for running — and how she’s been body shamed.

“The body shaming thing is crazy,” Tynan told Real Woman. “After I ran the Broad Street Run in 62 minutes, in the best shape of my life, somebody told me that I looked sickly. I couldn’t imagine saying to someone, ‘You’re too skinny’ or ‘I don’t like your dress.'”

This isn’t the first time Tynan has voiced her frustrations about comments she’s received regarding her appearance. In January, she took to Facebook after someone told her her on-air attire was “unprofessional.” And last October, Tynan shared a screenshot of a comment she’d received that stated, “Eat a hoagie Cecily ur [sic] too thin!!!!” 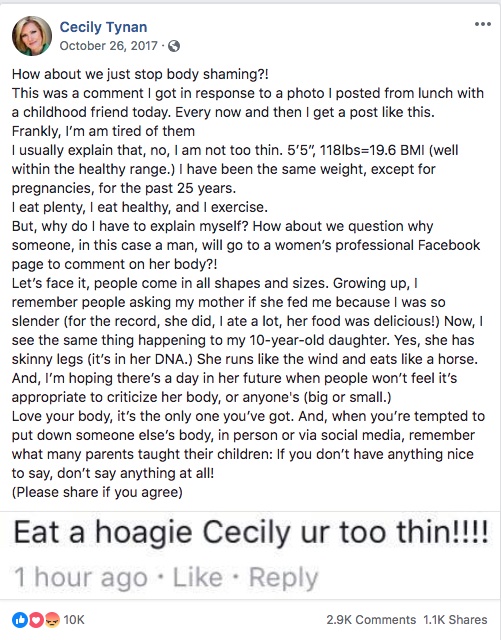 In response, Tynan wrote a lengthy post that started with “How about we just stop body shaming?!” and went on to explain that she receives comments like these “every now and then” and that she’s “tired of them.”

While we might typically think of body shaming in terms of criticizing someone whose body is larger, the fact is that “skinny shaming” is a rampant issue as well — and, no, it’s not any less harmful than other types of shaming. Sarah Herstich, a Philly-area licensed social worker who specializes in body image and eating disorder therapy, says that she’s seen an uptick in body shaming with the rise of social media.

“I think shaming of all sorts has grown exponentially since social media has been driving our lives,” says Herstich. “I don’t think you can scroll through anything, even when people are posting positive messages without seeing some sort of shaming remark these days, which is really sad.”

When responding to body shamers, Herstich says the key is to keep the focus off the body. Rather than defending her health, someone — especially a public figure with an audience — can use it as an opportunity to call out our culture’s issues with shaming in general, and to focus on how her accomplishments and actions, not her appearance, are what’s important.

While Tynan is right — the body shaming thing is crazy — her experiences are a good reminder that our culture has a lot of work to do in how women’s bodies are treated and discussed.

“Women of all sizes can feel this way because women’s bodies are critiqued in the public on a regular basis. Shaming of any kind is wrong and our bodies are our business, and it’s really no one’s business to make comments in any regard,” says Herstich. “But also that being said, I don’t think that skinny shaming or thin shaming will ever shift until there’s a shift in fat shaming — or other types of shaming having to do with bodies — because they are so related.”

Tynan did not respond to Be Well Philly’s request for comment.