Sometimes, you just need to cool down with a sweet treat — hit up these 15 local spots for a serving of refreshing vegan ice cream. 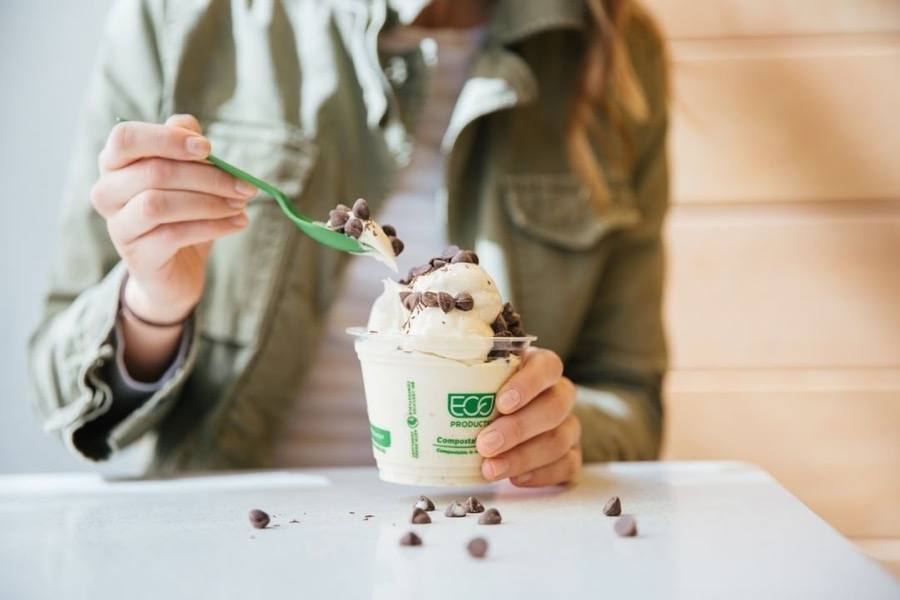 Get ready, folks! The Summer Solstice has come and gone, meaning that summer is officially here and uncomfortably warm temperatures are imminent. That said, it’s time to batten down the hatches for the heat and put cooling precautions in place — by scouting out where, exactly, we can get our hands on ice cream, of course!

Nothing beats that cold and creamy sweetness gracing your tongue on a hot day, an experience vegans and dairy-averse folks sometimes miss out on. But not anymore: We’ve rounded up 15 spots in Philadelphia and the ‘burbs where you can score a refreshing serving of dairy-free vegan ice cream. So take note, then swing into one of these spots to make your summer a whole lot cooler.

All The Way Live Cafe

Where: 6108 Germantown Avenue, Germantown
What: This cafe serves up a 100-percent raw and vegan menu, which includes an extensive dessert menu of cakes, pies, and puddings, all of which can be topped with a scoop (or two or three!) of their house vanilla ice cream. Think: two-layered apple cake with a hearty scoop of ice cream to top it all off, totally vegan, completely raw, and absolutely mouthwatering.

Where: 1500 East Passyunk Avenue, Passyunk Square
What: B2 can fulfill your fro-yo needs with their soy-based frozen yogurt option, which is a great addition to any of their smoothies but is also flawless on it’s own.

Where: 1726 Sansom Street, Rittenhouse
What: We were VERY excited when Ben & Jerry’s became vegan-friendly. Now, you can grab some of your favorite flavors, sans dairy. Right now, at their Rittenhouse location, Ben & Jerry’s is serving up the vegan version of Caramel Almond Brittle — an almond-flavored non-dairy ice cream with salted caramel swirls and chunks of almond brittle.

Where: 116 Market Street, Old City
Where: Right now you can swing into Franklin Fountain for chocolate, vanilla, peanut butter or Hydrox (like cookies and cream) vegan ice cream, as well as mango and lemon sorbets, which are also dairy-free.

Where: 1526 Sansom Street, Rittenhouse
What: Aside from slinging vegan falafel, Goldie has a unique take on milkshakes: all of their dairy-free, vegan milkshakes are tehina-based. Take your pick of their Turkish Coffee, Coconut, Chocolate, or Original Tehina flavors.

Where: 1408 South Street, Center City
Where: Little-known fact: Govinda’s actually has a bunch of ice cream options! So next time you’re stopping in for their Golden Tofu Wrap and a peanut-butter brownie (can you tell that’s my go-to order?), know that you can spring for a scoop of ice cream as well.

Where: 2311 Frankford Avenue, Fishtown, and 4903 Catharine Street, West Philly
What: So. Many. Vegan. Flavors. Seriously, Little Baby’s has the most extensive dairy-free ice cream menu I’ve ever seen. Just to give you an idea of the creative flavors you can score from Little Baby’s: speculoos, cucumber dill, açaí — and the list goes on. You can also find Little Baby’s  pints sold all around town.

Where: 630 North 2nd Street, Northern Liberties
What: Aside from having a clearly labeled vegan menu, Soy Cafe’s dessert list is entirely vegan. This includes cookies, cupcakes, and brownies. And guess what? That brownie can be crafted into a brownie sundae (*gasp*) with the addition of one their soy ice cream flavors (or both, no judgement). Or you can go right for the good stuff, a scoop of chocolate or vanilla, on its own.

Where: 81 Lancaster Avenue, Malvern
What: This restaurant in the ‘burbs serves up a full menu of vegan dishes, best followed by a scoop of their chocolate, vanilla, almond bark, mint chocolate chip, or royal coffee vegan ice cream.

Where: 711 Walnut Street, Washington Square West; 1921 Walnut Street, Rittenhouse
What: Since their opening two summers ago, Sweet Charlie’s has been drawing a crowd for their Thai-style rolled ice cream delights. Though they have a plethora of non-vegan options, they also cater to the vegan crowd with their “Nada-Moo” ice cream base and vegan-friendly toppings like fruit and Oreos.

Where: 1221 Locust Street, Midtown Village
What: If you’re at the plant-based spot Vedge, there’s a good chance you’re going all out — we’re talkin’ appetizer (hello, rutabaga fondue), entree and, of course, dessert. Many of their desserts are paired with a creative ice cream flavor. Think: The apricot bar with halva ice cream and the strawberry sorrel bread pudding with saffron ice cream.

Where: 742 South Street, Bella Vista
What: Vegan Tree is an awesome spot to swing into when you’re walking around South Street. It’s great for a quick snack or smoothie, but also for a meal of veggie sushi or a veggie burger. Whatever you choose, wash it down with a vanilla, chocolate, mango, strawberry, almond or coconut soy milkshake.

Where: 126 South 19th Street, Rittenhouse
What: After some thoughtfully created vegan fare at V Street, it only makes sense that you’d round out your meal with some vegan ice cream. Order Halo Halo from their dessert menu and a serving of purple sweet potato ice cream, orange granita, coconut whip, and pickled pineapple will arrive at your table.

Where: 124 South 19th Street, Rittenhouse
What: Even vegans sometimes have cravings for some not-great-for-you fast food, and Wiz Kid does those cravings justice. Aside from serving delicious vegan cheesesteaks and fries, they also offer their own line of vegan ice cream dubbed Cool Kid Ice Cream. Their offerings include Cookies: Cream and Dough, where cookies ‘n cream ice cream meets cookie dough; Chocolate AF, a dark chocolate ice cream with ganache, chocolate marshmallow, and chocolate chips; and Lucky Charms, a vanilla-based ice cream with cereal pieces and marshmallows.