Surprisingly, I didn't hate it. 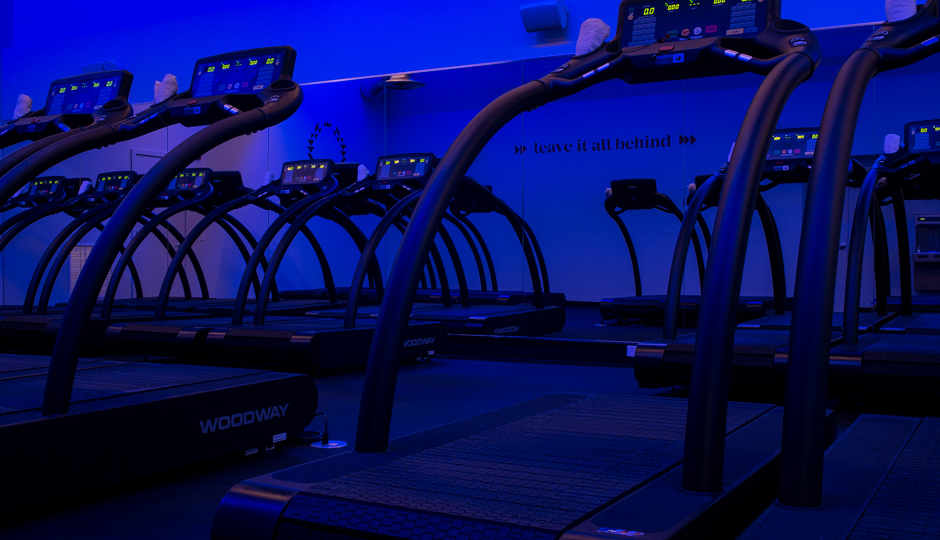 Running on the treadmill is to runners what eating at a Roy Rogers off the highway is to a road trip: A last resort — something you know you may end up doing at some point due to circumstances you can’t control, but definitely not something you want to do. So back in January, when we wrote about the Philly area’s first boutique treadmill fitness studio, Incline Running, opening in Haverford, the groans from runners in comments along the lines of “treadmills suck” were not a surprise.

But when you take the treadmill out of your apartment building’s dingy basement gym and plop it into a studio decked out with LED lights, a killer sound system and a running coach who will keep you from coasting, does running on the treadmill really still suck? Last Sunday, I found myself at the 10 a.m. 45-minute Run One class at Incline Running looking for the answer.

Before I stepped onto the treadmill, one of 19 Woodway treadmills in the studio, I announced to Scott, the coach for the class, that I couldn’t remember the last time I’d been on a treadmill. As we’ve already discussed, like most people who have access to, um, the outdoors, I’ve never been a big fan of treadmill runs.

Over the next 45 minutes, I wouldn’t say I became a total treadmill devotee, but I did become convinced that Incline’s workouts on the treadmill, which will run you $28 a pop, serve a totally different — and useful! — purpose than going for a solo run outdoors, much like a spin class and a bike ride along the SRT serve different purposes. In this case, running on the treadmill at Incline gave me a better workout than I ever would’ve pushed myself to get during a run outdoors.

The class started with a walking warm-up, where Scott clued us into where we should be in terms of pace on the treadmill at different points in the class. Then, we went into intervals, alternating between 30 to 60-second rounds of easy running, hard running and full-on sprinting with walking or slow-paced running for rest. I felt like I’d been transported back to one of my high-school track practices, with some snazzy lighting thrown in the mix. While it definitely took me a second to get a hold on my ideal pace for each portion of the intervals, once I did, it was easy to bounce back and forth. And it was nice having Scott there to shout out how many seconds we had left, so I didn’t have to stare at the clock on the treadmill like I would if I were doing a solo treadmill workout. Around the time I thought I was going to have to hop off my treadmill and call it a day — that would be about 18 or so minutes in — we broke for the strength portion of the class, doing exercises like weighted sit-ups, lunges and more, some incorporating the treadmill.

Then came worst part — a piece of a running workout that you can only get with a treadmill — the Dynamic Mode portion. Woodway treadmills have a mode where, essentially, instead of the treadmill moving for you, you have to make it move. This adds resistance to each and every step. In this mode, we walked, did an exercise that is best described as what you would do if with your off-the-skateboard leg if you were skateboarding, pushing the treadmill with one leg, and did sprints. Not collapsing onto the treadmill in tears during this portion was probably the one of most difficult thing I’ve done (that and admitting to myself that I will never be a backup dancer for Beyoncé), so when the folks at Incline told me after the workout that they offer an entire class in this mode, I almost cried out in horror at the thought. But still, while this part was truly tough to get through, I can appreciate it for its unique take on getting your muscles burning.

After Dynamic Mode, it was back to intervals, then stretching. It was a really good workout that can best be compared to a spin class, but for running. And much like a lot of folks who are spin class diehards but have never gone for an outdoor bike ride in their lives, it seems the studio will appeal to folks who don’t necessarily love the act of running, but love getting a killer workout and are willing to run if that’s the means. That said, the studio’s coaches are happy to work with runners who come to classes with training goals in mind.

So, to recap, what I thought of the workout at Philly’s first treadmill studio in just a few words: it was super efficient, since you can control things like incline and resistance in a way you can’t outdoors, WAY better than running in the rain, and forced me to push myself harder than I ever do when running on my own. It also wasn’t anything like going for a for-fun run outdoors — but why would you want to pay for that, anyway? And if you’re intrigued but still skeptical, know that your first class is free, so you won’t lose anything by trying it out.