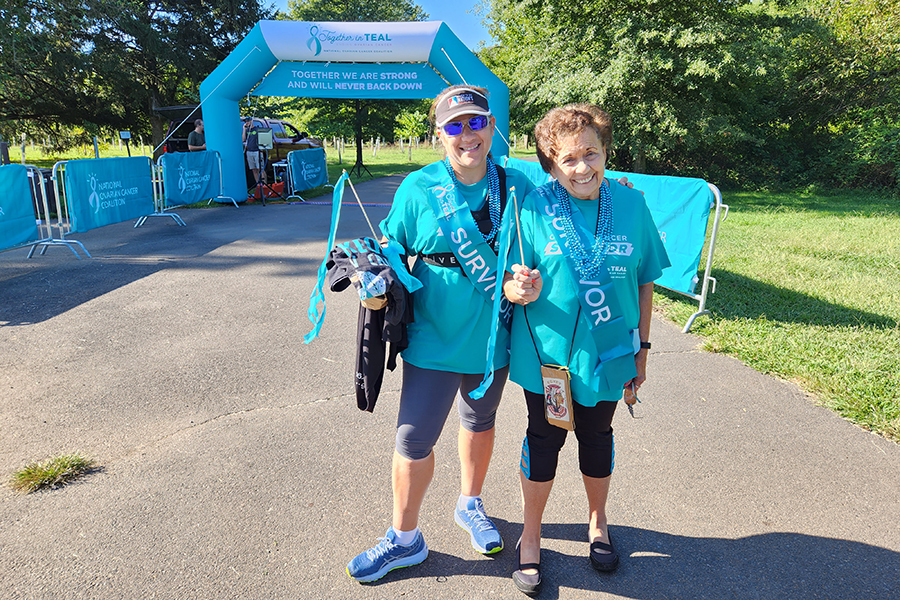 In the last 20 years cancer mortality in the United States has decreased by more than 30 percent. This is remarkable – but it doesn’t mean we’ve reached the finish line. Even more exciting is that the past few years have seen a revolution underway that is quickly changing our fundamental understanding of what is possible in cancer treatment. New insights have led to critical innovations to combat certain kinds of cancers using techniques like immunotherapy, which uses the body’s immune system to fight cancer; antibodies which deliver drugs directly to tumor cells; and drugs targeting specific genetic defects.

And the Center that is leading some of the most transformative research is located here in Philly.

“Some would call it a utopia for [breast cancer gene] research,” says Jacquelyn Powers, Associate Director of Genetic Counseling at Penn Medicine’s Basser Center for BRCA, that studies and offers cancer care for those affected by a BRCA gene mutation. “Some of the trials and treatments being developed here felt out of reach ten years ago. The progress has been unbelievable.”

Research on BRCA mutations is critical to the larger effort of combatting cancers that stem from mutations. Everyone is born with BRCA1 and BRCA2 genes, which suppress cancers from developing. But some people are born with a mutation in one of these genes, which can increase their risk of developing breast and ovarian cancers, among others like pancreatic, prostate, and melanoma. BRCA1 and BRCA2 gene mutations are some of the most common causes of inherited cancer risk in the population. The Basser Center has arguably been the premier center for research, education and treatment for BRCA related cancers since its founding 10 years ago; a place where the most cutting-edge treatments are being researched through clinical trials.

Powers is critical to that effort. As a genetic counselor, Powers’ role is to fully understand a patient’s cancer risk through assessment of personal and family cancer history, leading to improved early detection and prevention. By clarifying that genetic risk, she helps unlock the treatment potential and progress of the Basser Center, and since a genetic approach is highly personal and predictive, her work is to not just identify the patient’s particular risk, but determine the risk for that patient’s relatives, and help a whole genetic lineage understand their risk of cancer.

It’s a vision that seeks to detect cancer early before it becomes life-threatening, or to prevent cancer from developing at all. Powers and her colleagues are working to expand the approach to as many eligible people as they can, so that as few people as possible have to feel the effects of these gene mutations. If the Center succeeds in fully implementing that goal, it could mean the neutralization of a whole class of disease. 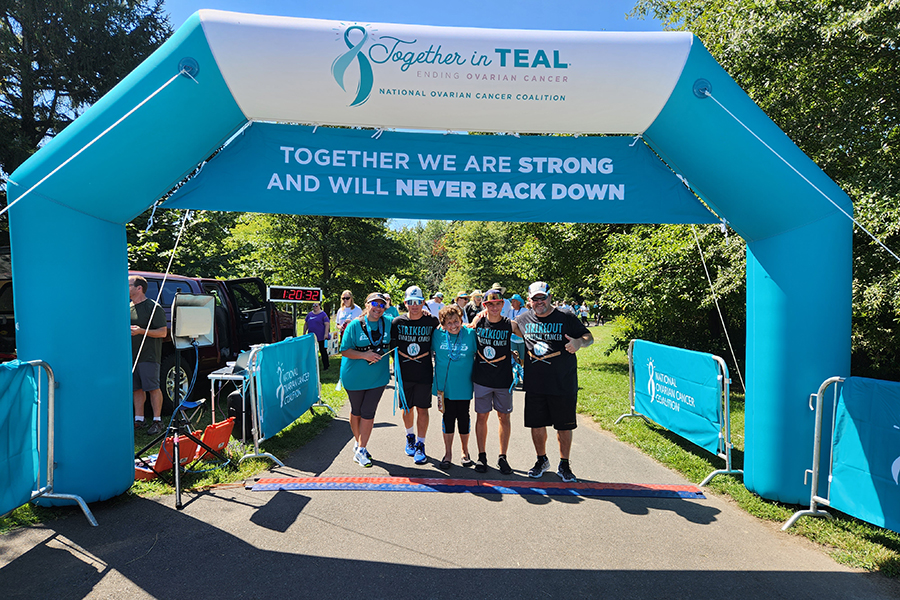 The Importance of Genetic Testing

Ovarian cancer is known as the silent killer, and Christine Hussey and her mother, Betty Walter, who have both participated in genetic testing at the Basser Center, know the importance of early detection by people like Powers–and how hard it can be to get early detection outside of the Basser Center. When Walter was 70 years old, she began to experience gastrointestinal symptoms, and went to a series of doctors looking for a solution. She knew her father had pancreatic cancer, so she brought that up with her gastroenterologist, but he was dismissive based on her limited symptoms.

After months of continued symptoms, she demanded that her doctor run some tests. “He said, ‘You have to find a doctor immediately. You have an advanced peritoneal cancer,’” she says.

Because of her age and the development of the cancer, many doctors refused to operate on Walters, and Hussey had to search far and wide before finding a doctor who recognized that her mother was in strong enough health to cope with the surgery.

“They did a complete, radical hysterectomy. They took my spleen, my pancreas, gallbladder, and my appendix out. Then I had 18 chemo treatments, 20 radiation treatments,” Walter says. “I was so upset that I had to go through it because nobody had been willing to test me further.”

But that’s only half the story–and the second half demonstrates how critical a role genetics can play in cancer treatment. Walter’s treatment was successful, but the whole time she was undergoing treatment, her daughter was having her own struggle to get tested.

“As soon as I found out that my mom had been diagnosed, I started calling my doctors and telling them I had a change in my medical history, and I want to be proactive,” Hussey says. “I had started feeling weird, with the same stomach symptoms my mom had gone through.”

Her doctors dismissed her symptoms as stemming from observing her mother’s experiences. Her OB/GYN, a Penn Medicine provider, however, offered her a CAT scan to relieve her stress, and connected her to the Basser Center for BRCA for further genetic testing. Hussey was grateful for the introduction to the Basser Center team to help find the solution.

On the day of her mother’s last chemo treatment, as they were celebrating, she got a call–her tests indicated that she likely had ovarian cancer.

“I was officially diagnosed with stage IV ovarian cancer, and they had all just thought I was a hypochondriac,” Hussey says. “Now I almost felt like people thought I had leprosy. It was like, ‘Stay away from the Hussey family; you might get cancer.’” She had to go through a hysterectomy, an appendectomy and a liver resection before chemo and radiation.

Both Hussey and her mother are now in remission and are in follow-up care. But they are also upset that they had to go through that experience when early detection may have relieved some of their struggle. It’s something that they experience time and again through their involvement with others in the ovarian cancer survivor community–they had joined a survivor group after their treatment, where many of the members had received a late diagnosis, and the consequences were deadly.

“My mom and I are the only ones still alive from that group,” Hussey says.

Genetic testing offers hope for future generations. During their treatment, both Hussey and Walter enrolled in a clinical trial that performed genetic testing. This testing showed that they shared a BRCA gene mutation which largely contributes to their shared history of cancer.

Now, others in their family have the option to get tested for a BRCA gene mutation–and decide how they want to live their lives with that risk, whether pursuing early preventative surgery or getting regularly tested throughout their lives.

“We have a female relative who is at the age where she’ll have to make decisions about her future–whether to get tested and, if she has the mutation, how aggressive she wants to be in her prevention options,” Hussey says. “But the fact that she has those options is a blessing of modern medicine.”

As genetics-driven preventive care expands, the goal is for there to be fewer and fewer stories like those of Hussey and Walter. At the Basser Center, their focus is to make life-threatening BRCA-driven cancers a thing of the past by using the genetic information they gather to develop personalized treatments and increase understanding of hereditary causes of cancer.

“We see individuals who are going through treatment for a diagnosis; we also see individuals who themselves have never been diagnosed with cancer,” Powers says. “They share that they’ve had many family members who have had cancer, and they want to know if they’re at risk.”

As a genetic counselor, Powers takes that information and performs a risk assessment as to the probability that heredity is the cause, then orders genetic testing to evaluate whether there is a causative gene mutation.

Whether the result is positive, negative, or detects what is called a “variant of uncertain significance”, she guides the patient through their options and facilitates next steps, including consultation with one of the Basser Center’s expert physicians, who provide recommendations regarding management, which may include various or more frequent screenings or preventative surgery. The goal is to pull from the increasingly large number of options to find the plan that not only treats the patient but does so in the way that gives them the best life afterwards.

“Currently, we recommend that women with an increased risk of ovarian cancer have their ovaries removed at the appropriate time,” Powers says. “We’re always saying we need to do better.”

For example, early detection makes regular screenings a viable option for breast cancer. But preventive technologies are under study at the Basser Center as well. A preventive vaccine, which trains the body’s immune system to recognize cancer cells associated with BRCA as soon as they begin to grow, is in a clinical trial at the center.

“There’s actually a waitlist to enter the trial because people are hungry for that promise and possibility,” Powers says.

The work extends beyond those individuals seen at the Basser Center. Powers’ work also directly benefits the patient’s family members. When someone tests positive for a gene mutation at the Basser Center, Powers helps them get in contact with family members who might share the gene mutation, and break down myths about whether or not someone is at risk.  For example, a breast cancer survivor can still get ovarian cancer, men can inherit and pass on a genetic mutation increasing prostate cancer risk.

“It can be a heavy burden for patients, especially those going through a cancer diagnosis,” says Powers. “So we try to take some of that burden off.” In that way, she and her patients are expanding the reach of genetics-based care, one person at a time.

Separately, Powers points out that the research on BRCA1 and BRCA2 can have implications for cancers that behave like BRCA-related cancers or “BRCA-like” but are in fact, not due to an individual having actually inherited a BRCA1 or BRCA2 gene mutation.  The science can be translatable.

It’s something that gives hope to Hussey and Walter as they seek to raise funds for ovarian cancer research. In 2023, Hussey, her husband, and her fourteen-year-old twin sons will scale Mount Kilimanjaro in an attempt to raise $70,000 for the National Ovarian Cancer Coalition–a testament to the importance of the work and their dedication to seeing a solution to the silent killer.

“We want to show people that we can climb mountains together,” Hussey says. “There’s not a day that goes by that I don’t think of the women we lost. So by all means, take my saliva, take my blood, do what you need to do. Because we don’t want to see another family go through what we did.”

This year the Basser Center for BRCA celebrates the 10-year anniversary of being a leader in discovery and prevention through BRCA-related cancer research. With a goal to keep pushing boundaries and disrupt the timeline of cancer development, the Basser Center strives to continue to be a beacon of hope for individuals and families with BRCA1/2 gene mutations. To learn more about the Basser Center and genetic testing and counseling, visit their website at basser.org.

SPONSOR CONTENT How to Look Five Years Younger, According to a Penn Medicine Cosmetic Surgeon

SPONSOR CONTENT Life With MS: The Unseen Issues Couples Face On Their Journey