People Are Obsessing Over These Sassy Nameplates From Philly

How Valerie Safran — yes, the restaurateur — found her ultimate side gig. 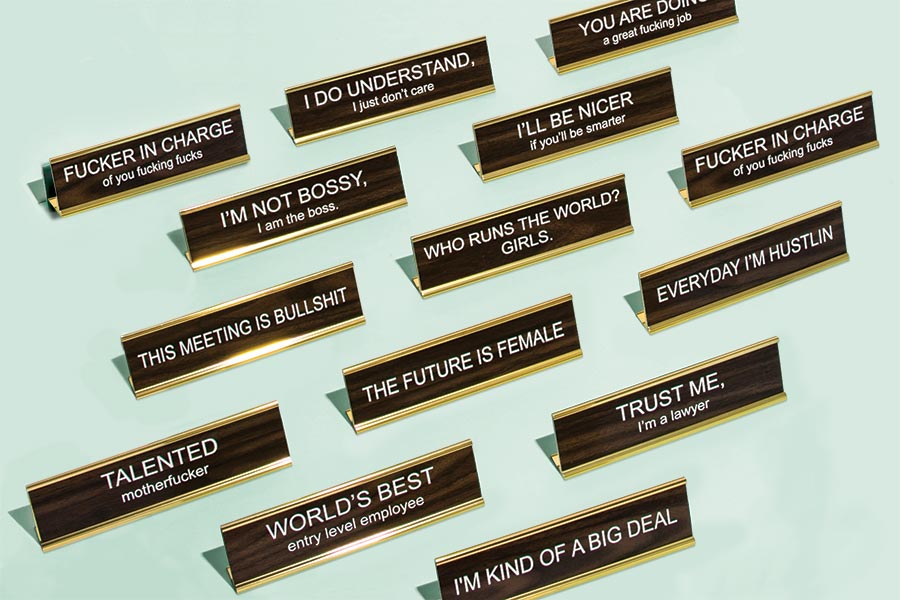 He Said, She Said nameplates at Open House. Photograph by Claudia Gavin

In the daylight hours, the second floor of Barbuzzo looks more like a FedEx warehouse than a Midtown Village restaurant. Piled on the wooden tables are hundreds of retro keychains and desk nameplates emblazoned with modern-day sass (think: “I’m Kind of a Big Deal,” “I’m Not Bossy, I Am the Boss” and “Talented Motherfucker”), ready to be shipped out. You may have seen them at Nordstrom or on ModCloth.com; they’ve also shown up in Cosmo and on Kris Jenner’s desk in an episode of the Kardashians. The unassuming brain behind them? Valerie Safran of 13th Street’s Val and Marcie, the retail twosome that owns all those restaurants and shops.

“I always wished I had something where I could click a button and it’s done. I love restaurants, but they are so hard,” Safran says. Then, four years ago, after noticing that expletive-laden greeting cards were best-sellers at Open House, she had the epiphany. Her first keychain (“Where Are My Fucking Keys?”) sold out quickly, so she ordered more, wrote new phrases, and expanded the line (which is known as He Said, She Said). Button, found: She’s now gone wholesale and has sold more than 600,000 nameplates.

Published as “Every Day I’m Hustlin'” in the February 2018 issue of Philadelphia magazine.