On the Market: Renovated Rowhouse in Girard Estate

This classic 1920 South Philly rowhouse had its facade modernized sometime after 1950. That made modernizing its inside in 2018 a no-brainer. 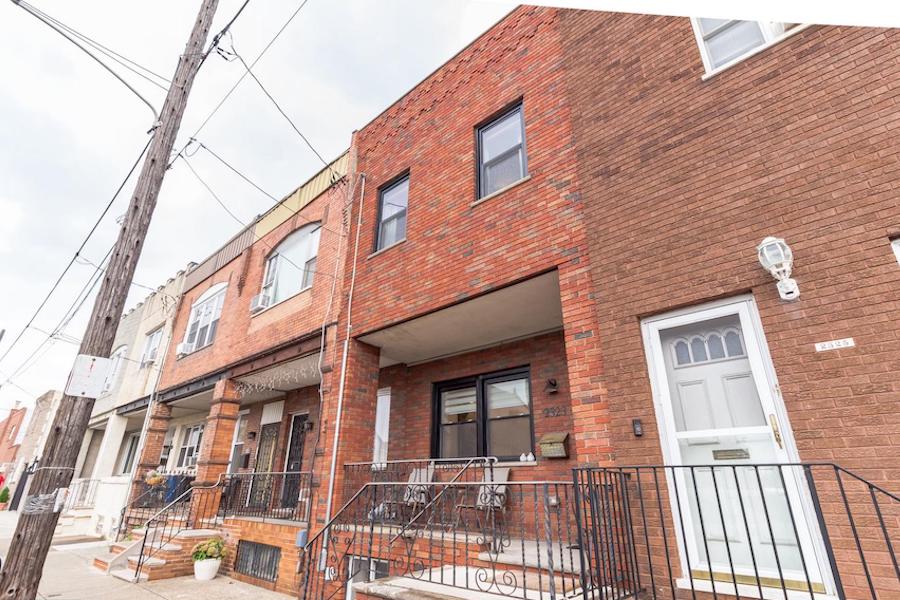 Many 1920s South Philly rowhouses got facelifts in the 1950s and 1960s that made them look modern on the outside. The owners of this one, at 2323 S. 18th St., Philadelphia, PA 19145, decided they should do the same thing on the inside. | Bright MLS images via Coldwell Banker Realty

We’ve featured many classic Philadelphia rowhouses that got modernist makeovers over the years. In most cases, the makeovers only modernized the insides, though many of them did interesting things to the front facades in order to make them stand out from the crowd while still fitting in.

In the case of this renovated Girard Estate rowhouse for sale, someone else had already taken care of modernizing the outside. As you can see from the photo above, this house is part of a row of porch-front houses dating to 1920 or thereabouts. But its facade got a facelift that turned it into a basic midcentury modern rowhouse, quite likely in the 1950s or 1960s.

So, in 2018, its owners decided to rebuild the inside to the same standard. Actually, make that a higher standard, for they used high-quality materials throughout, from the Brazilian pecan floors on up.

And the modernism on display inside is of the more recent, postmodern variety that permits mixing of design cues and decorative elements. 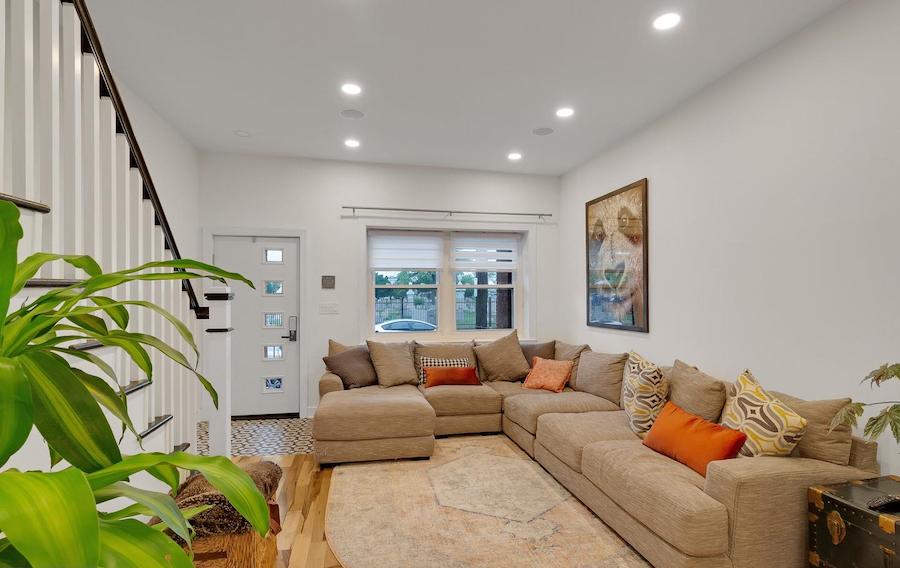 The five-window door that welcomes you into the house, of course, is very midcentury. The living room itself is likewise unfussy, and the original 1920s banister remains on the stairs to the second floor. 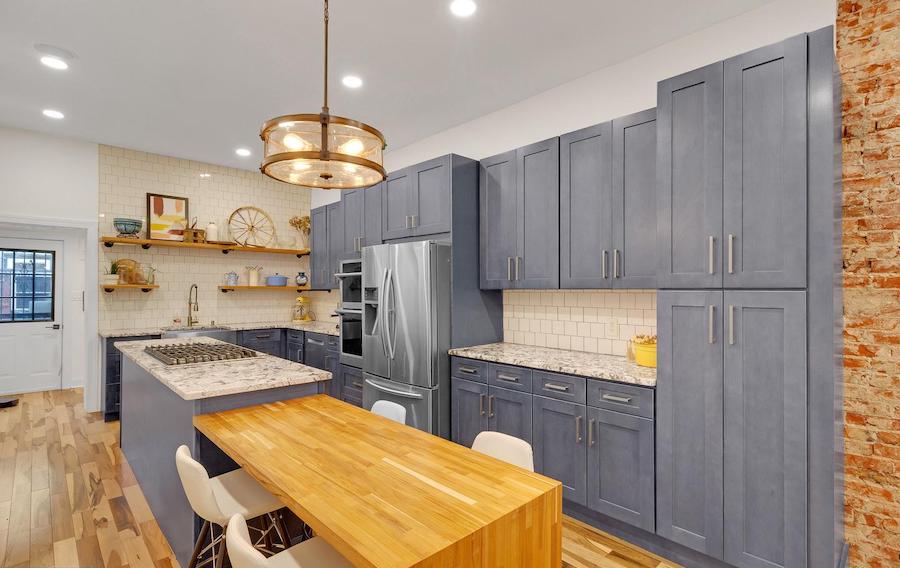 The kitchen, on the other hand, takes its design cues from the Shakers, the religious sect that invented modern furniture before anyone knew what modern meant. Its custom cabinetry clearly shows its Shaker roots. It also has display shelving over the sink, granite countertops and top-drawer appliances, including a five-burner gas cooktop whose fifth burner is large enough to handle a griddle. Your guests can use the powder room past the kitchen. 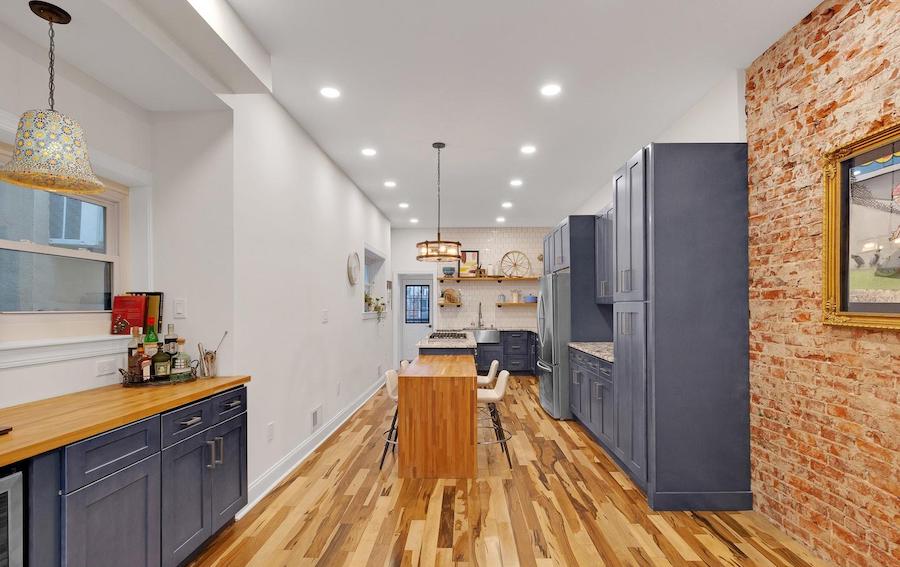 A waterfall wood dining table that seats four is attached to the island, but if you wanted to host a bigger dinner party, you could do so by putting a table and chairs in the space between the living room and kitchen. This middle section of the main floor adds visual interest with its exposed brick wall on one side and coffee bar with beverage fridge on the other. (The light fixture above the coffee bar, by the way, does not come with the house.) 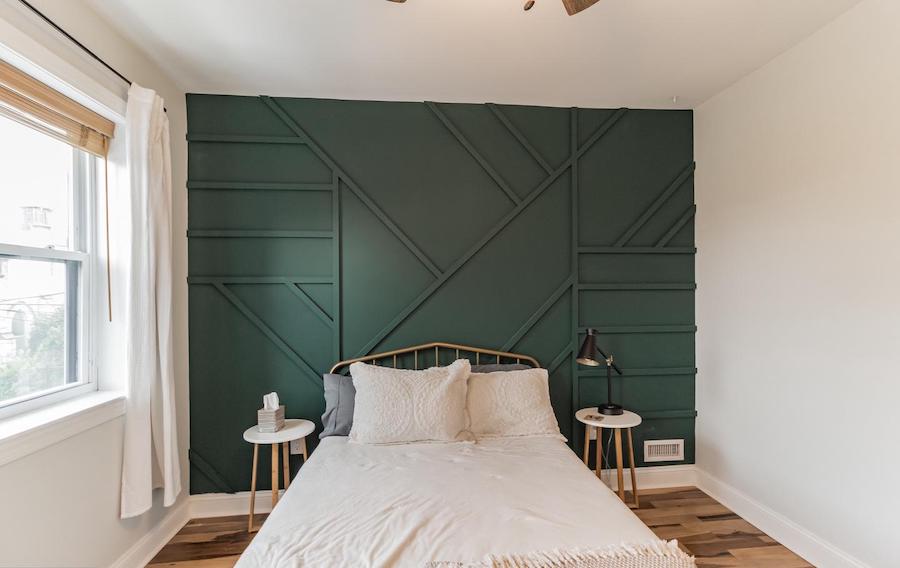 Each of the three upstairs bedrooms has its own distinct personality. The front bedroom has a handsome green wood accent wall. 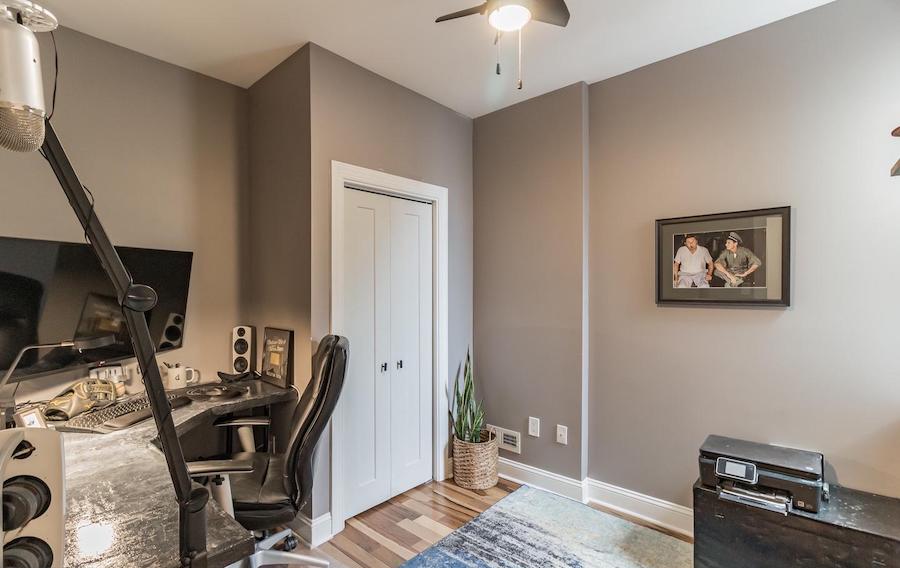 The middle bedroom, which is most likely the smallest of the three if this house follows Philadelphia rowhouse standards, currently serves as a home office. These two bedrooms share a hall bath, and the hallway has a marble tile floor. 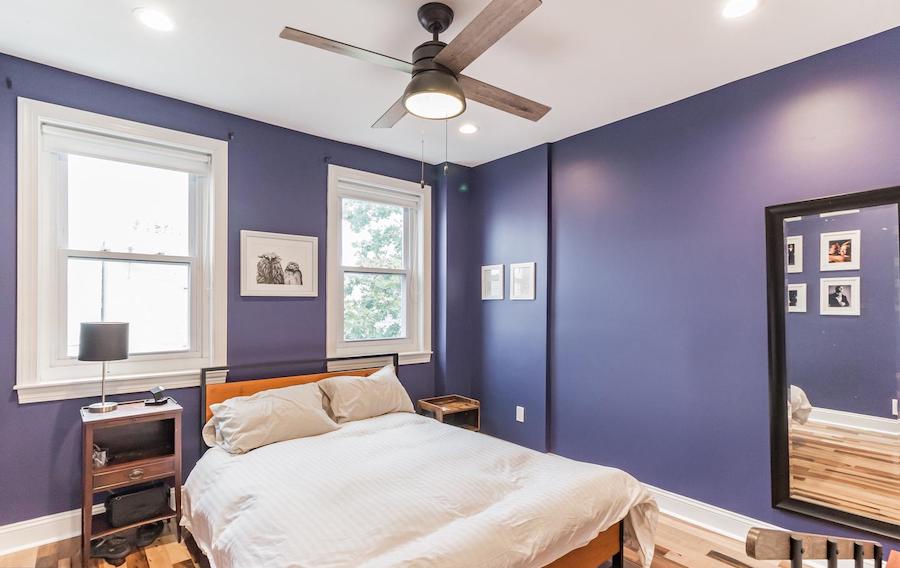 The primary bedroom in the back is both stylish and nicely outfitted. The bedroom is painted blue and has plenty of natural light. 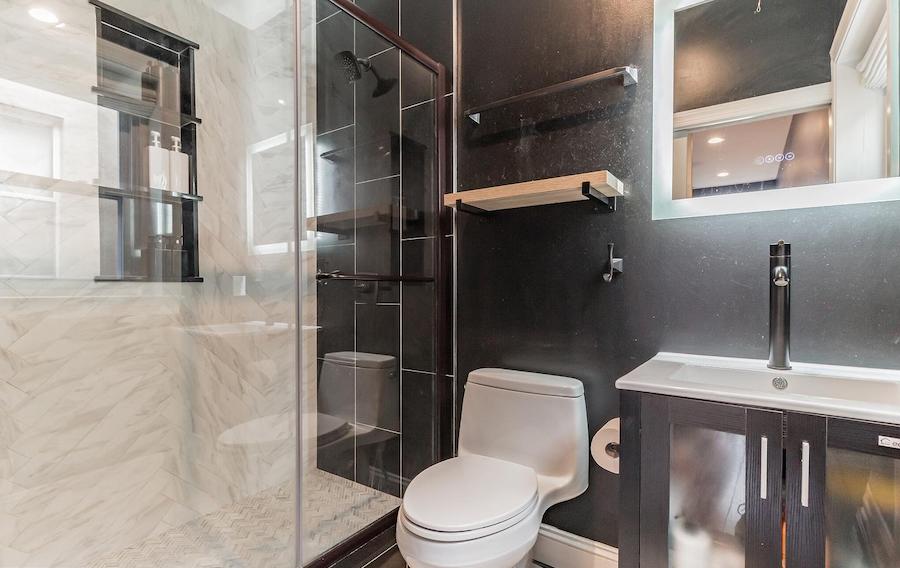 An open walk-in closet at the entrance to the primary suite leads to the primary bathroom, which has striking black walls and a vanity to match. It also has a large walk-in shower with dual shower heads.

This renovated Girard Estate rowhouse for sale has a small backyard in addition to its front porch, which faces a cemetery across 18th Street. But two parks are also a short walk away: Stephen Girard Park to the southwest and Guerin Recreation Center to the northeast.

West Passyunk Avenue is lined with shops and eateries, and you will find a ShopRite supermarket and the Quartermaster Plaza shopping center a little to the west of Stephen Girard Park.  Just a little ways further from you is the East Passyunk restaurant row. All of these places you can walk to, which is why this house has a 95 Walk Score, but several SEPTA transit routes also pass close by.

That makes this handsome modern rowhouse a great find if you want city convenience with less hustle and bustle.

OTHER STUFF: The renovation also replaced the house’s electrical system, plumbing, windows and roof. Its sale price has been reduced twice, most recently by $10,000 on Sept. 9th.