Hamilton Construction Gets Under Way With Ceremonial Brick-Breaking

The foundation for the $82 million apartment tower is already in place. The assembled dignitaries "demolished" pieces of it to mark the start of construction. 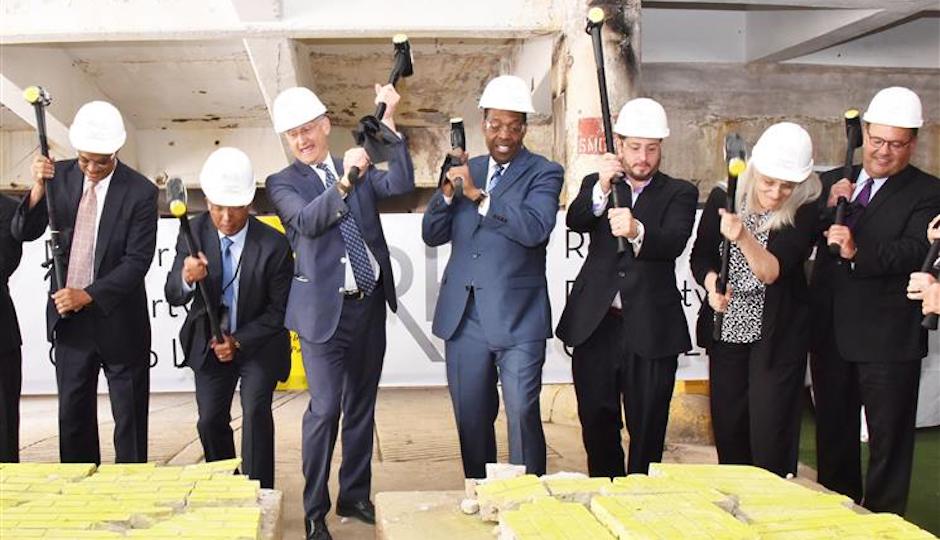 Philadelphia City Council members, Community College of Philadelphia officials, and executives of Radnor Property Group gathered before an invited audience this morning (Sept. 12th) to mark the official start of construction on the first phase of The Hamilton, RPG’s $150 million mixed-use development.

They did so in what remains of the former Philadelphia Inquirer and Daily News newsprint transfer facility by swinging sledgehammers into ceremonial chunks of brick wall salvaged from the partially demolished structure.

The portion still standing will become the parking garage, amenity floor and outdoor terrace for the first of the two apartment buildings. Atop this one-story, high-ceilinged base will rise a nine-story, C-shaped apartment tower. In addition to the building lobby, amenities and a 150-space parking garage, the base will also contain 1,600 square feet of retail space.

RPG President Dave Yeager pointed out in a post-groundbreaking interview that reusing part of the paper transfer facility both saves money and reduces time to completion. “We didn’t have to do any excavation,” he said. “It saved on construction costs and time.”

Yeager did not provide a dollar figure but said the savings were substantial. “Because of the savings, we will be able to offer a very competitive product that is priced lower than our competitors.” This, he added, should make the units affordable to a wider cross-section of the surrounding community, including CCP students coming from abroad to study at the college. RPG will market the building to students by offering both furnished apartments and roommate-matching services.

CCP President Donald Guy Generals identified students at his school as a core market for the Hamilton apartments. “Market-rate apartments are one of the many new offerings that students can utilize should they wish to live near campus,” he said in a news release about the ceremony. “The Hamilton will have an impact on this neighborhood, including residents and businesses who will have a transformed, bustling new hub where an otherwise unoccupied corridor once stood.”

The site of The Hamilton has sat vacant since the Inquirer and Daily News moved their printing facility to Conshohocken in the early 1990s.

Yeager said that CCP is just one of several institutions surrounding the development that will contribute to its success. “Thirty thousand students here, the School District headquarters, the new police headquarters, Hahnemann Hospital, Drexel University’s medical school — we’re in the middle of it all,” Yeager said. “The synergies between all of these economic drivers will drive the success of this development.”

The Hamilton is being built on land owned by CCP under the terms of a long-term lease to RPG. While Yeager could not disclose the terms, he said that the lease would be “accretive and beneficial” for the college.

“They’re a partner every step of the way,” Yeager said of CCP. “Our success will also breed their success.”

In addition to Yeager and Generals, City Council President Darrell Clarke, whose district includes the site and the college, and Logan Square Neighborhood Association President Drew Murray spoke at the ceremonial demolition. 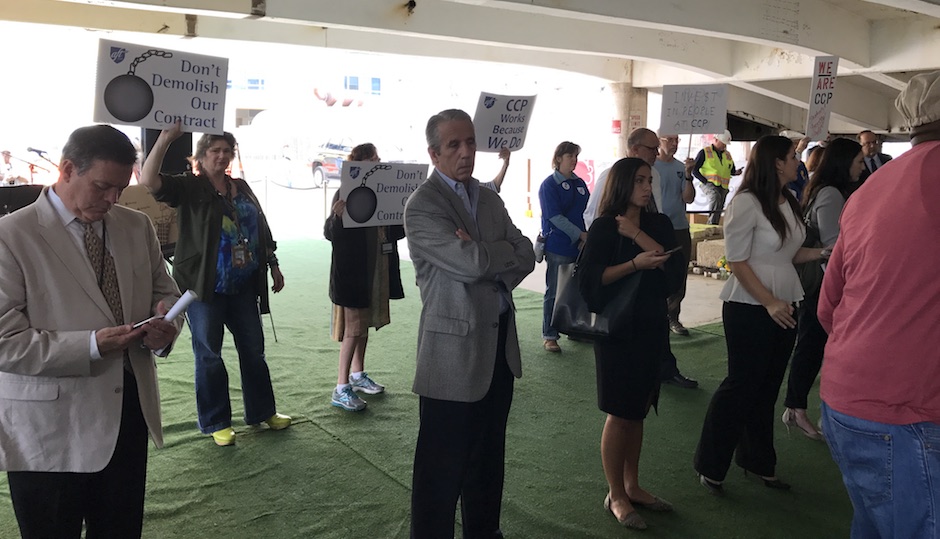 The brick-breaking took place against a backdrop of a silent protest by members of CCP’s faculty union, who have gone two years without a new contract. The main sticking point in the contract negotiations is the CCP administration’s effort to require full-time faculty to teach five courses a semester. “We don’t think we can do that within the bounds of a reasonable work week,” said biology professor John Braxton.

Full-time faculty at CCP have had a four-course workload for about 40 years, Braxton said, with the option of teaching a fifth course for the academic equivalent of overtime pay. The union objects to the administration’s proposal that the fifth course become mandatory.

The first phase of The Hamilton is slated for completion in August 2018.