Plus: George Bochetto takes the city to court over the monument. And a court official gets fired after a caught-on-camera tirade. 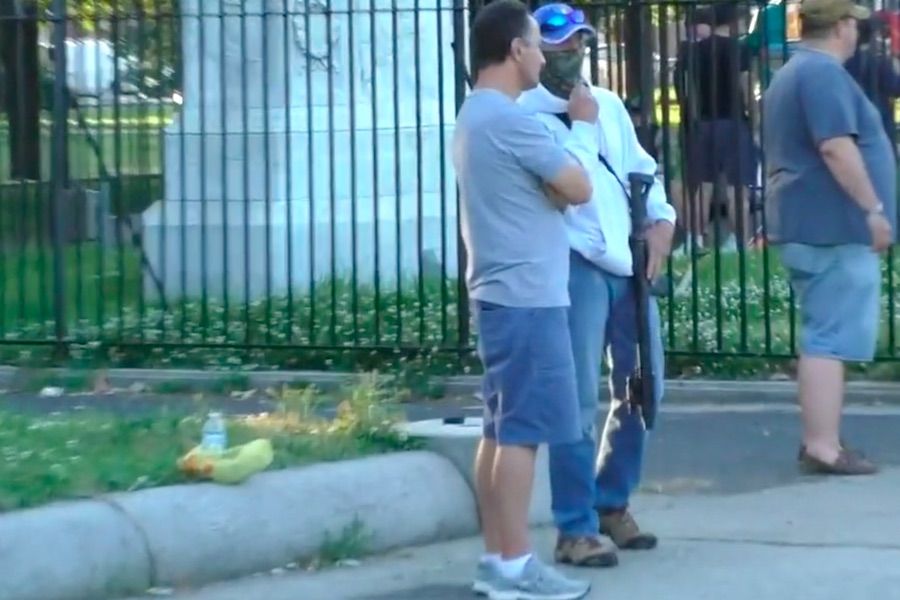 A man with a gun “guards” the Christopher Columbus statue at Marconi Plaza in South Philadelphia. (Image via Unicorn Riot/Creative Commons)

Those on the anti-Christopher Columbus (or just the curious bystander) end of things were a little alarmed over the weekend to find some men with very big guns “protecting” the Christopher Columbus statue at Marconi Plaza in South Philly. People wondered how they could be allowed to do that.

The law must surely prevent that, right?

Why aren’t the cops doing anything about the guys with the guns?

These were the kinds of remarks and questions I was seeing over the weekend and on Monday morning. And a Fox 29 personality flat out said on the air on Monday that open carry is illegal in Philadelphia. Except that’s not really true.

In Philadelphia, you can openly carry a firearm — whether it’s a small pistol or a controversial AR-15, the favorite weapon of mass shooters — so long as you have a license to carry. Anyone 21 years or older can apply for said license through the Philadelphia Police Department.

You pay $20. You give them a passport type of photo. And you answer some yes or no questions on a piece of paper:

If all of that is in order, a member of the Gun Permits Unit does a quick in-person interview with you, and you get a decision in the mail within 30 days. And if they deny you your carry permit, naturally you can appeal the decision.

It’s unclear whether the armed men at the Christopher Columbus statue have carry permits. And it’s also unclear whether the cops on the scene have asked them. (I asked the department and am awaiting a response.) But the cops aren’t obligated to ask. It’s at their discretion. And if the men do have carry permits, well, there’s not a damn thing anybody can do about it.

Speaking of the Christopher Columbus Statue…

The city had said that there were no plans to remove the statue, but Bochetto and some South Philly residents weren’t exactly feeling too trusting of the city, which removed the statue of that other hero to South Philly, Frank Rizzo.

So Bochetto went into court to try to prevent Mayor Kenney from doing anything to the Columbus statue at this time — if indeed Kenney wanted to. Those court proceedings got caught up in all kinds of legal entanglements.

Meanwhile, what did the city decide to do about the statue? Put a box around it.

That’s right. On Monday night, the city announced that workers would put a “boxing apparatus” around the statue on Tuesday. (A spokesperson for the mayor’s office confirmed that this is “basically a large vertical box” that “will protect it from damage while the process unfolds.”) Then the whole mess will go to the Art Commission, which will ultimately decide on the fate of the Columbus statue.

Here’s what Kenney had to say on Monday night about the statue’s fate:

The Christopher Columbus statue has been a source of controversy in Philadelphia, as have similar installations across our country. Christopher Columbus, like many historical figures, has supporters and detractors. For centuries, he has been venerated with the stories of his traversing the Atlantic and “discovering” the “New World.” However, his history is much more infamous. Mistakenly believing he had found a new route to India, Columbus enslaved indigenous people and punished those who failed to meet his expected service by severing limbs, or in some cases, murder.

Surely, the totality of this history must be accounted for when considering whether to maintain a monument to this person. Given that many are now calling for the removal of the statue, and others believe it should remain, I have directed the Art Commission to review the statue, its location, and its appropriateness in a public park. We are committed to listening to all points of view and moving forward in the best way to heal our deep divides.

I believe that a public process will allow for all viewpoints—especially those of indigenous people whose ancestors suffered under the rule of European colonizers—to be considered. It’s also my hope that by initiating this process, the current tensions in Marconi Plaza can end. I urge all South Philadelphians attempting to protect the statue to stand down and have your voices heard through the public process.

Whenever my mom is around for Thanksgiving, we do that thing where you go around the table and say what you’re thankful for. Some people get all mushy, talking about love and blah blah blah. Others go the goofy route of saying something like, “I’m thankful that Aunt Gina didn’t burn the turkey again this year.” I’m sure this is the same thing that unfolds in many households.

Well on Thanksgiving this year, I feel like we’re going to have some most unusual thankfulness lists. And on mine, you will find cell phone video. We’d never in a million years be where we are in the conversation about change in America without cell phone video.

And the latest cell phone video to come my way is this one:

That fella is none other than 61-year-old Michael Henkel. After he’s caught on tape ripping down protest signs in Philadelphia, a woman off-camera says, “Black Lives Matter.” His response? “Not to me, they don’t.”

Henkel is a supervisor in the Philadelphia court system. Or should I say, he was. After this cell phone video got out, officials fired him. Good riddance.