Foglietta Plaza May Be Philly’s Most Criminally Underused Public Space

Everyone agrees it could be much more, but nobody agrees on what it should actually be. 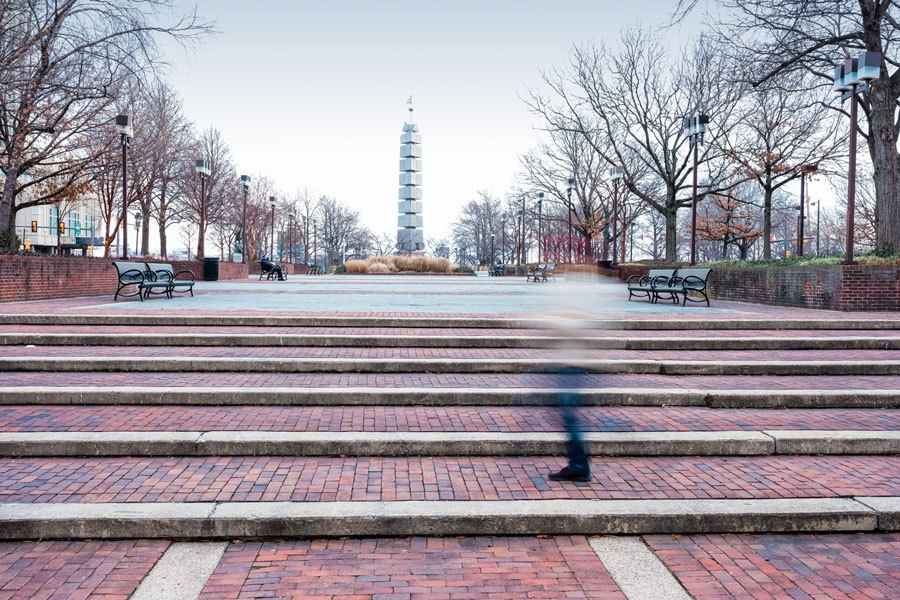 I got a call from a Queen Village resident asking for help solving a mystery: Why doesn’t anybody use Foglietta Plaza for anything? If the name isn’t familiar, that’s because despite a prime location nestled among Columbus Boulevard, the Vietnam Veterans Memorial, and the Society Hill Towers, the two-acre plaza doesn’t get much use. No farmers’ market. No seasonal craft fair. “Even the homeless don’t go there,” the tipster said. “I’ve heard that nobody really knows who owns it.”

The plaza, named for an erstwhile City Councilmember, is nothing to look at. It’s got well-tended Korean War and Beirut vet memorials, but otherwise, the space — with its boxy, terraced design — emphasizes the “hard” in hardscaping. Its location is indeed enviable, on a cap over I-95, providing street-level access from downtown to the Delaware River. At a moment when Philadelphia is finally making something special of its waterfront, doing more here makes sense.

Poke around, and you’ll learn this idea isn’t novel. With a William Penn Foundation grant, the Delaware River Waterfront Corporation — the outfit driving Penn’s Landing’s renaissance — convened a planning effort in 2016 to remake the space as a sculpture garden (to house a collection that once stood on the water). Slam dunk, right?

But spend a few minutes with the planners’ report, and you find there are an ungodly number of stakeholders. Four different civic groups. Three war memorial groups. The city and PennDOT, each of which owns a chunk. And, in a delicious twist of jurisdictional clusterfuck-all, a taxpayer-subsidized nonprofit created by Vince Fumo called the Interstate Land Management Corporation. Born of frustration with PennDOT’s land claims around building I-95, it’s charged with oversight of interstate-adjacent land.

While everyone with a stake seems to agree that the plaza could be much more, nobody agrees on what it should be. The DRWC covets it as the only property that could house the aforementioned sculpture collection in toto. Terry Williamson of the Philadelphia Vietnam Veterans Memorial Fund envisions it as part of a larger memorial district. The ILMC thinks a for-profit cafe is necessary to spur upkeep, while neighbors object to a cafe, preferring a space for quiet contemplation.

And because the ownership question is so murky — between the city and PennDOT and the state-legislation-codified ILMC — ultimately, nobody “owns” the plaza. In that way, it’s a monument of another sort: the purest possible iteration of Philadelphia bureaucratic gridlock.

Which, while poetic, certainly isn’t the best use of two acres next to the waterfront.

Published as “Free Foglietta Plaza” in the February 2020 issue of Philadelphia magazine.