New businesses have given Yardley a shot of adrenaline. 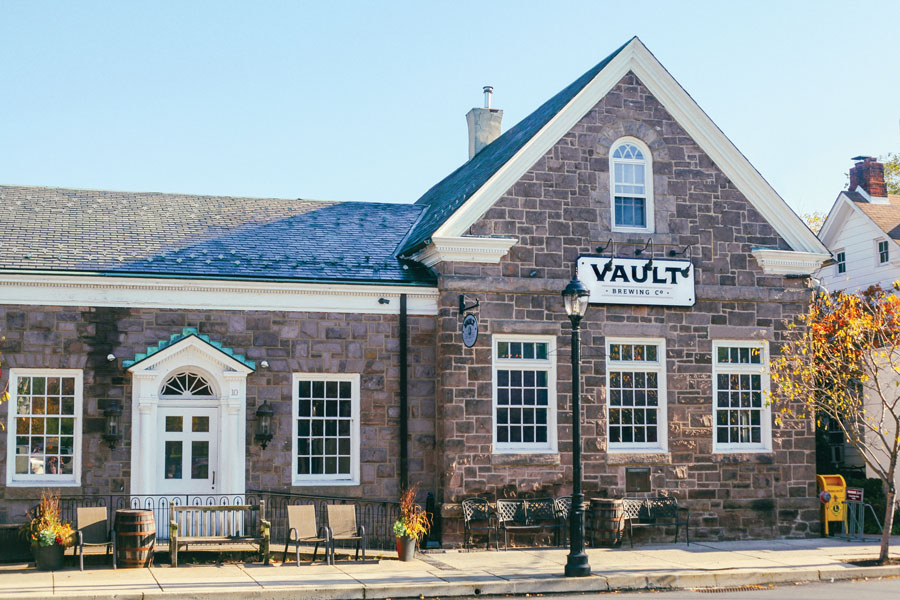 Yardley is on a roll. Photograph by Claudia Gavin

Before they opened the Vault brewpub in Yardley in hopes of launching an unlikely nightlife scene, the Cain family saw the sleepy Bucks County borough as a sitting duck. And not because Yardley takes great pride in its ducks that waddle from the picturesque puddle called Lake Afton to help the borough’s lone traffic light stop cars.

The town had been clinging hard to its Currier and Ives quaintness. Some old-timers even protested the coming of the Starbucks in 2002, thinking it was a step toward becoming a cookie-cutter suburb or an overdeveloped circus of roaring motorcycles like New Hope, about 10 miles up the road. But young people were moving in, desperate for more than hair salons and real estate agents on Main Street. Yardley, except where it borders the Delaware River, is surrounded by larger Lower Makefield, the most prosperous municipality in the county — and one that has no bars.

“We didn’t know at the time that Lower Makefield was dry,” 31-year-old Vault Brewing Company co-founder James Cain says. “We looked around and said, ‘Where do these people get a drink?’”

The Cains opened the jazzy Vault to instant success in 2012. Then came Pretty Bird, their cafe directly across the street, then Kawaii Tori, the sushi restaurant that Pretty Bird morphs into at night. Now there are many nights when Jim Cain, the family’s fit 58-year-old patriarch, hustles across Main Street between his packed brewpub and his sushi place, where the $15.50 Yardley Roll is popular. This summer he opened a second pub, Vault Taproom, a few blocks away.

Cain, a former Bristol-Myers Squibb executive, had heard about entrepreneurs who launch multiple businesses in a single town, building goodwill and economies of scale. “We want to be in the conversation when somebody’s sitting down on Friday night saying, ‘Honey, do you want to go to New Hope? Do you want to go to Doylestown?’ We want them to say, ‘Hey, let’s go to Yardley.’ Ten years ago,” he says, “they’d say ‘Why?’”

There’s always a tension between progress and preservation. Yardley was founded in 1682. It hosted Washington’s troops in 1776. Thanks to malls and superstores, it got pretty quiet by the 1990s. And that was fine with some residents. “Who needs more pedestrian traffic?” a codger asked borough council in 2002, when the community debated extending its sidewalks. In 2011, owners of the Continental Tavern had to fight for permission to build a dining porch.

It was a start. Mark and Eric Plescha converted their father’s folksy Charcoal Steaks ’n Things into the three-bells Charcoal BYOB. Then Vault really changed the attitude. A developer recently sold 63 new townhomes on land that had been Yardley’s toxic bleachery. Glen Lowe, whose mom is the borough tax collector, launched a cocktail lounge behind Vault. Liz Young, a retired Johnson & Johnson exec, just opened an indie bookstore.

In a plaza across from Vault, Jef Buehler points to new lighting and tables where his Experience Yardley project stages outdoor concerts. Buehler professionally advises towns on revitalization but lives in Yardley — so he does it here for free. We chat about balancing preservation with potential, plus the parking-space turf wars that have erupted. “My definition of a parking problem is when no one is parking in your downtown,” he says. As we talk, two earsplitting motorcycles rumble up Main Street. They idle at the stoplight. Then they accelerate and head north, toward New Hope.

Published as “Yardley Is on a Roll” in the December 2019 issue of Philadelphia magazine.