The Council president’s office thinks that diversifying the faces behind the rapid gentrification in his district supports “minority participation in redevelopment and commercial activity.” He is long overdue for a reality check. 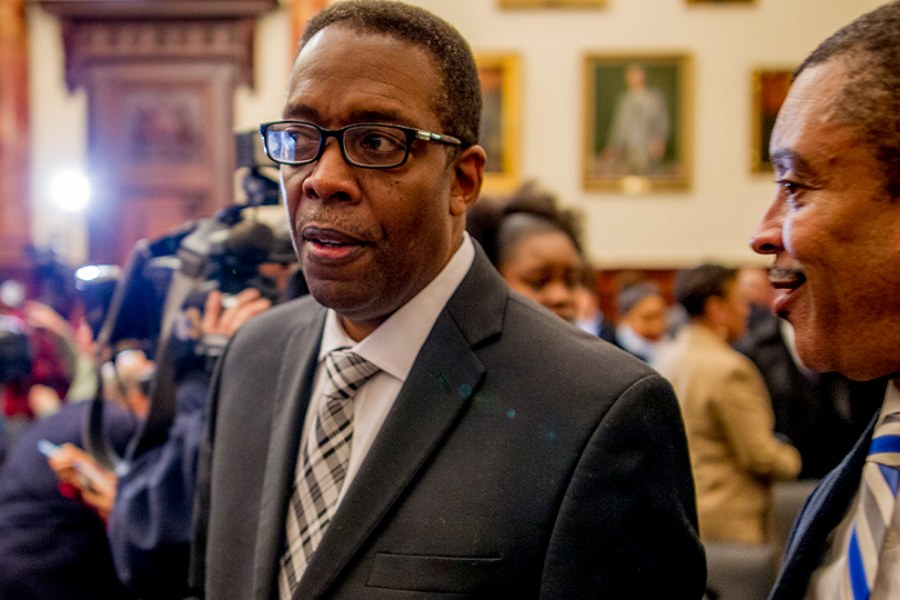 This quote goes double for Black developers who profit from land sales that will displace their own people. One need only look to North Philadelphia for a perfect example.

In recent months, there have been reports that City Council president Darrell Clarke and members of his staff stepped in to help a Black developer acquire city-owned properties near Temple University’s main campus in 2016 after the Philadelphia Redevelopment Authority balked at the developer’s initial lowball offer. But Clarke’s office’s role wasn’t just a one-time nudge — it actually appears to have been a series of interventions that eventually led to a $125,000 discount for the developer, former NFL linebacker Shawn “Zaddy” Bullard.

City officials have yet to explain how the vacant lots on Cecil B. Moore Avenue west of Broad Street that Bullard bought were ultimately priced. While attempting to downplay the extent to which the Council president’s staff was involved in the process, a spokesperson for Clarke’s office brought up diversity as a motivating factor.

Seriously? A net positive? This isn’t how any of this works.

Whether developers are Black or white, helping them further gentrify your community is actually a net negative. Bullard, who was one of a handful of Black businesspeople and political figures to meet with Donald Trump in Philadelphia during the 2016 campaign, didn’t use that land to promote accessible community-led usage. Instead, he has already turned one of his lots into a coffee shop and has plans to develop his other properties into high-end luxury apartments. At one point on the project, the Redevelopment Authority told the Inquirer, Bullard failed to show that he was complying with an Economic Opportunity Plan to ensure gender and racial diversity for his construction work, though he later agreed to.

This isn’t how you “support minority participation,” Darrell Clarke. This is how you further gentrification in your district. Having a Black developer at the head of an effort that will help to push out Black and brown people doesn’t make the situation any less worse—and in many ways, it aggravates it.

Turning vacant lots in North Philly into high-end properties is just another sign of displacement for the very poor. Poverty, unemployment, and gun violence disproportionately impact Black and brown people living Clarke’s district. Given that his district contains one of the most gentrified areas in America, Clarke should be doing more to protect the residents affected by these rapid changes. Diversity in regards to those doing the development is a moot point — diversifying how the land will be used is more important.

As the backstory of this particular development becomes clearer, the Council president should think very carefully about how he characterizes it. While Clarke’s office has denied influencing the discount Bullard received, the self-proclaimed “social entrepreneur” has been saying otherwise on Instagram while boasting that he’s “box office” for the press.

Wow I’m so flattered! Made the cover of the Philadelphia Inquire again! With another Ignorant racist article on Sunday, fueled by jealously and envy. I guss I pissed someone off just because I conducted good business.—————————————————————— I don’t know any real business man or woman that doesn’t negotiate the appraised price of real estate. Even a rookie first time home owner knows to negotiate and not to pay for the “appraised price,” of any real estate. So why would I be any different? ——————————————————————-Especially when it wasn’t worthy that much at the time, in 2016. When I started the process to go after the land no one else even wanted it. No one wanted to have to build the commerical portion of this deal because developers knew it was a hard sell getting commerical tenants that far from broad street. The same “developers” that say they would have paid double today. Are the same developers that slept on the location back then. So f*ck off. ———————————————— Hindsight is 20/20 and after I had great for-site and took all the risk. There are always people that come and say they would have paid more, “after the fact.” BLAH BLAH BLAH BLAH…. ————————————————— I appreciate the RDA and council President and district working with me on the price. As they do all the time for the non majority developers buying bigger deals. Deals with wayyyyy more substantial margins then mine. Awesome I might add no developer down there deserved this land more then me. I put in the investments in my community and do GREAT work. ———————————————————- Moral of the story. Believe in yourself study and work harder then the next person no matter how bigger they are then you at the time. And you will start to make the moves that will allow you to start to catch up to them. Stay humble never greedy and your blessings and hard work will start to pay off. But In the process they will find ways to hate and try to discredit your accomplishments. ———————————————————- P.S next time please find an up to date and better picture of me, dang man😏 —————————————————————#FAKENEWS #FightOn #Zaddy #philadelphia #phillyinquirer #IAmLegend

Let this serve as a cautionary tale to those who think they can misappropriate diversity to escape accountability. Greed sees no race, and only one color: green. Darrell Clarke should have known better.