Chaput: There’s No Such Thing as an LGBTQ Catholic

The Philadelphia archbishop’s comment at a meeting in Rome sparked debate — and a strong response from one well-known, LGBTQ-friendly Jesuit priest. 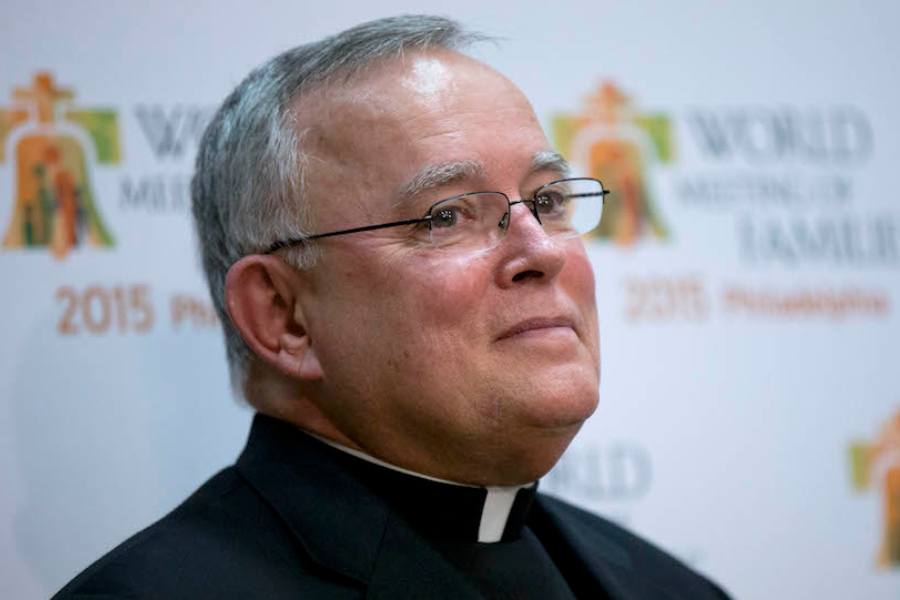 Once again, Philadelphia Archbishop Charles Chaput is taking flak over his views on homosexuality.

The National Catholic Register reports that during a Synod on Youth earlier this month in Rome, Chaput said that there’s no such thing as an “LGBT Catholic.”

His reasoning? Because, he said, defining people by their “sexual appetites” has “never been true in the life of the Church, and is not true now,” according to the publication. In accordance, he rejects the “heterosexual Catholic” label as well.

“It follows that ‘LGBTQ’ and similar language should not be used in Church documents, because using it suggests that these are real, autonomous groups, and the Church simply doesn’t categorize people that way,” Chaput said, per the National Catholic Register.

Chaput was one of several bishop delegates representing the U.S. at the Synod, an annual assembly of bishops from around the world who provide counsel on questions facing the church. This year’s theme was “Young People, the Faith, and Vocational Discernment.”

The Philadelphia archbishop made the comments regarding LGBTQ Catholics on October 4th, arguing that that the term “LGBT” should not be used in church documents at all. His comments, of course, sparked debate.

Roughly a week later, Jesuit priest James Martin penned an op-ed in America, of which he is editor-at-large. The piece, titled “Reflections on Two L.G.B.T. Questions at the Synod,” directly refutes Chaput’s claims.

Martin writes that questions about LGBT issues “may be considered primarily a ‘Western’ concern” in some parts of the church, but “the ethnic diversity of the L.G.B.T. community in the West, in part because some have sought refuge or asylum there because of their sexuality, demonstrates how the treatment of L.G.B.T. people is an issue for the global church.”

Plus, he says, the number of Catholics who identify as LGBTQ is increasing worldwide.

Under that premise, Martin goes on to list three reasons why the term LGBTQ should be used in church documents. First, he says, Catholic people who identify as LGBTQ deserve respect from the church, as called for by the Catechism, a text that sums up the beliefs of the Catholic.

“Refusing to call a group by the name that most in the group prefer borders on disrespect,” Martin writes.

Second, he argues that by using the term “LGBT Catholics,” the church can better include Catholics who identify as LGBTQ — an effort Martin has long supported. And last, he writes that using the term LGBT “does not constitute a declaration of support for a political ideology or theological position.”

Why? He explains this by offering the idea that “when a young person identifies as ‘gay’ or ‘lesbian,’ he or she is simply expressing a part of who he or she is, not making a claim about any controversial issues.”

“In fact, L.G.B.T. persons embrace a wide spectrum of social, political, economic worldviews and commitments,” writes Martin, a secretariat for communications in the Vatican.

I understand Archbishop Chaput's point but this member of the Body of Christ deserves a name, and this is the name that many, if not most, choose. (Likewise, we don't say "Negroes," we say "African Americans" or "Blacks.") Individuals and groups have a right to name themselves.

We don’t wonder. We know that until the Church accepts these LGBTI people, those <35 will continue to go elsewhere.

Beautiful! Thank you Father. Of course the Synod can, and should, embrace the LGBT community in the ways you discuss.

There are lots of stable families that don’t fit that recipe and lots of unstable ones that do. Different sex parents do not guarantee love and safety.

Can Philly Get a Lesbian Bar? Please?

No of course not you fool. Get back in your heretical box.

My family and I would certainly welcome it! ❤️

On both questions , no, and you know why father, plese guide all souls to heaven . The Bible doesn’t change bc it’s 2018