And its founder promises that there’s something for everyone there, whether you love or hate 45. 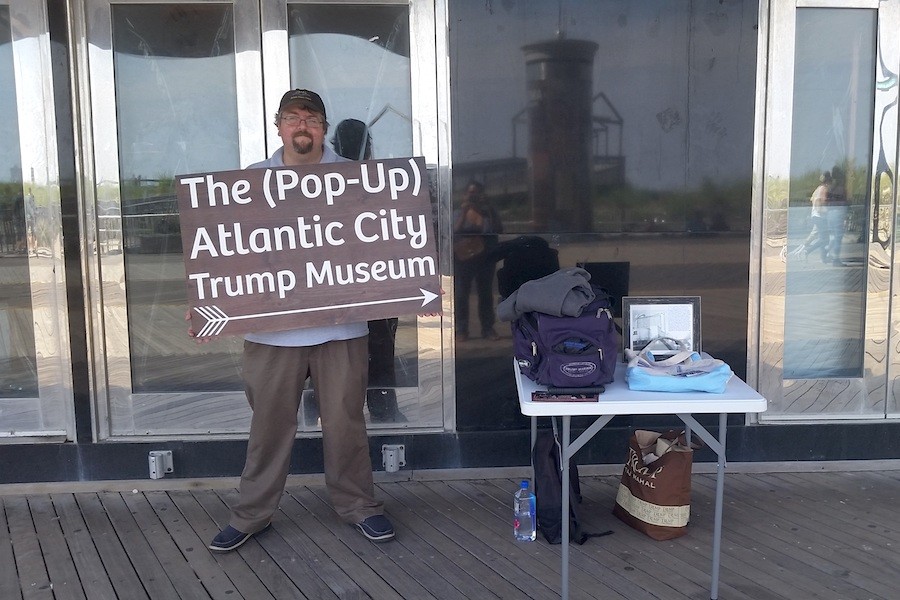 Most of the people who spend time at the Jersey Shore over the summer do so getting tanned, eating pizza and custard, playing volleyball, drinking fruity cocktails and light beers, and otherwise whiling the warmer months away. But not Levi Fox. No, the recent Temple PhD graduate has spent his summer launching a Donald Trump museum in Atlantic City.

While Fox unofficially tested the free pop-up museum on the Atlantic City Boardwalk last weekend, the official launch of the Trump museum is this Sunday, August 5th, from 2 p.m. to 4 p.m. in front of what used to be the Trump Plaza. In this phase, he’ll run the museum each Sunday in August.

Fox stresses that this is not a shrine to Donald Trump, but a living history museum. And to make it very clear to passersby that people of all political persuasions are welcome, his sign has two sides to it: one advertising his endeavor as The (Pop-Up) Atlantic City Trump Museum, and the other advertising it as The (Pop-Up) Atlantic City Anti-Trump Museum: 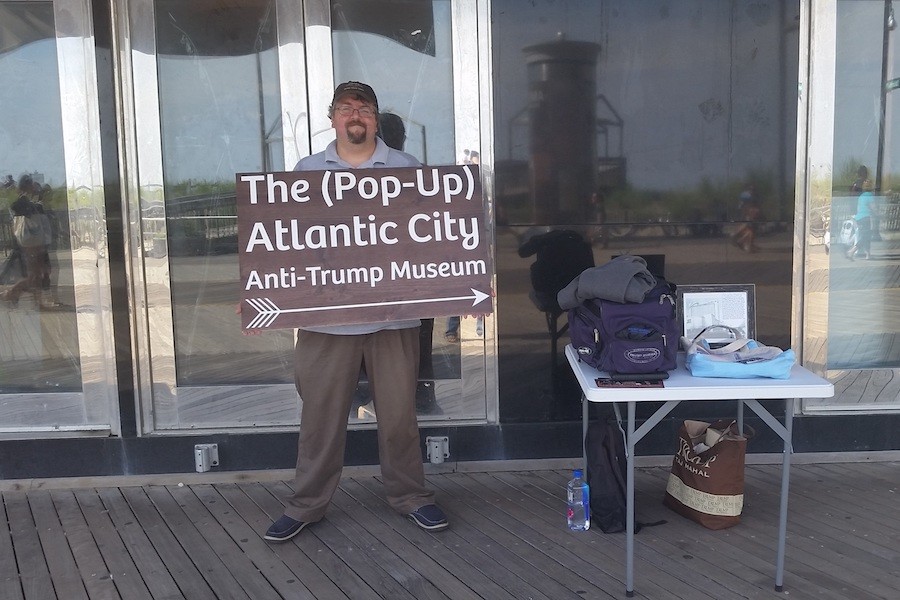 The Donald Trump museum is not a wide-reaching museum about the man who is our 45th president. It focuses exclusively on the Donald Trump era in Atlantic City, which lasted from 1984, when Trump opened the Plaza, until 2016, when the Taj Mahal finally shut its gaudy doors. So the artifacts and exhibits include things like a bathrobe from the Taj, a camera from Trump Castle (another one of Trump’s Atlantic City casinos), a Trump Marina T-shirt, a souvenir T-shirt from Trump’s birthday bash at the Taj, and various photos and clippings.

“But if I don’t get my eBay habit under control, that number will very quickly become 60,” says Fox, who obtained his PhD in history and public history from Temple in May. Fox says that while some of the objects were donated to him, most come from eBay, Etsy and other online sources, all at his own expense.

“I was able to raise some money through donations,” he adds. “Those donations being my graduation presents.”

Fox says that this is just the start. He has plans to launch a 501c3 nonprofit organization dedicated to a permanent Donald Trump museum in Atlantic City, and he says that he’d consider opening one in a storefront on the Boardwalk or inside Atlantic City’s forthcoming Stockton campus, where he’s an adjunct professor.

Fox also offers what he says are unbiased historical tours of Trump’s time in Atlantic City. They start at 5 p.m. on Sundays. And if you’re worried about the weather forecast this weekend, fear not.

“I just got these great Trump Taj umbrellas,” Fox says. “I thought they were going to be small ones, but they’re actually big. Really, really big.”