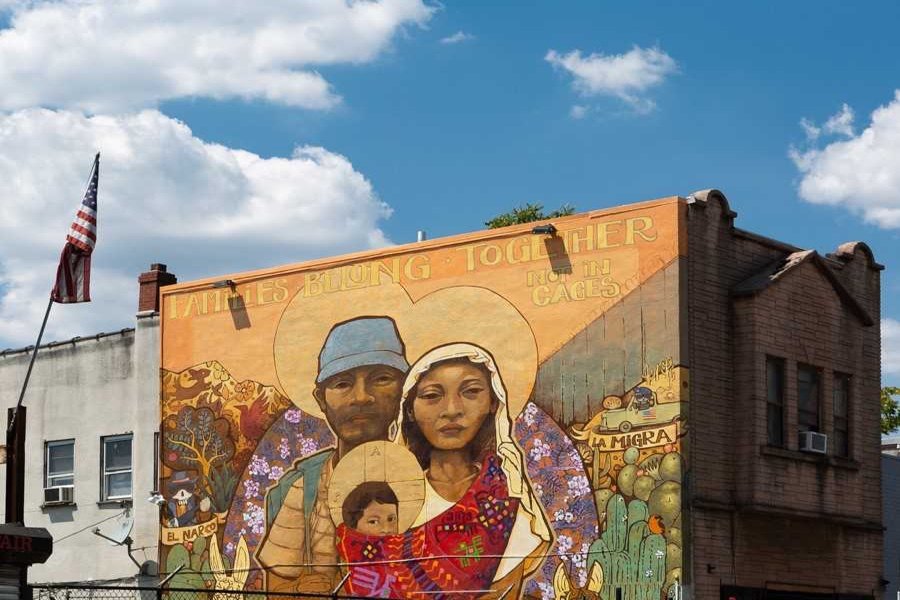 The new mural is located at 2536 Front Street in the Fairhill section of North Philadelphia. Photo by Steve Weinik for Mural Arts Philadelphia

A 900-square-foot mural of an immigrant couple and their young child, all three glowing with gold halos, now illuminates a wall in the Fairhill section of North Philadelphia.

The phrase “Families Belong Together…Not In Cages” rests above their heads, set against a detailed desert landscape and highlighted with some of the perils facing immigrants who make the journey to the U.S., such as “La Migra” (border patrol officers) and “El Narco” (gangs).

The mural, the brainchild of Chilean artist Ian Pierce, a.k.a Artes Ekeko, is the latest undertaking of Mural Arts Philadelphia.

Reflecting on the mural in her opening remarks at the dedication ceremony on Monday afternoon, Jane Golden, executive director of Mural Arts, said, “Art has the uncanny ability to shine a light on our collective diversity within the context of commonality, and that’s lost in today’s world and we need to get it back.”

Pierce arrived in Philadelphia mid-June to get started on the mural, which he sees as his contribution to the outrage about the immigration policy of separating families at the border and sending children to detention centers.

Philadelphia’s status as a Sanctuary City and the Fairhill neighborhood’s demographics being predominantly Latinx made this wall the perfect home, he said. He added that working on this mural with members of The Guild, the Mural Arts’ restorative justice program, and youth from the Providence Center opened his eyes to “the two worlds that exist in the U.S.”

“It’s like there are two countries that are living together and are going in different directions,” he said. “There’s the rich one, where Donald Trump comes from, and then there’s this other world, the resisting world, that is here in North Philly that I’ve gotten to know so well.”

Golden says Mural Arts has a huge waiting list of Philadelphians who want murals on their properties, and when they reached out to Alcides Franceschini — the owner of the house where the mural is painted — he was thrilled.

“Pierce went up and down the neighborhood, talking to residents…” Golden said. “And people were like ‘This is speaking our language, our language as a society.’”

Mural Arts Philadelphia, the nation’s largest public arts program, has produced over 4,000 works of public art around the city, and it is no stranger to political art.

“Art stimulates discussion. It’s a mirror of our times,” says Golden, who has been with the organization since its beginning. “It would be absolutely irresponsible of us to shy away from political and social issues. If Mural Arts could play a small role in bringing people together around these issues then I think that’s powerful and inspiring.”