I Went to See Aunt Mary Pat Last Night. This Isn’t What Philly Drag Should Be.

A performer recently accused of transphobia played it safe on stage, but the opening act and, worse, the audience were a different story. 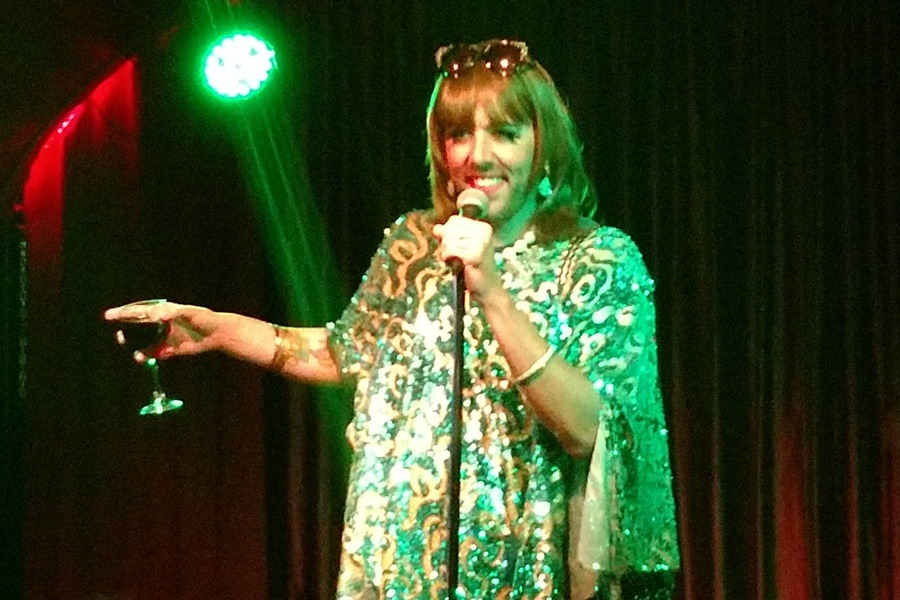 This commentary has been updated.

If Roseanne Barr were to perform in Fishtown, I suspect she would draw the same type of audience who showed up for local drag performer Aunt Mary Pat DiSabatino at Kung Fu Necktie on Thursday night.

After a day of controversy stemming from an accusation of transphobia, Aunt Mary Pat — a queer cis-gender male whose real name is Troy David Hendrickson — brought out a crowd of a little more than 100 people who seemed ready to defend her at all costs.

“They said he said something about those transgenders and now they’re trying to can him, but I support him,” I overheard an older woman saying to someone on the phone while awaiting Hendrickson’s performance. “People are so sensitive. Lighten up trannies, he’s one of you.”

“Aunt Mary Pat can be transgendered or whatever the fuck she is, I love her,” a guy said to a group of friends while drinking a Miller Lite. “The shit’s hilarious.”

I heard similar defenses of the persona as I, apparently the only Black guy in attendance, took a seat near the back of the room. From what I observed, the crowd was mostly white, mostly straight, and mostly hailing from Delco and other suburbs. A few of them appeared to be loyal fans of Hendrickson, wearing homemade T-shirts with his signature “Hey, Hun” slogan above Aunt Mary Pat’s face.

This was no Gayborhood drag show, where the crowds tend to be younger and more diverse, and the language used is more sensitive and respectful. As freely as the crowd tossed around transphobic language like “tranny,” “transgenders,” and “transgendered” throughout the night, it was clear to me that people came to laugh at Henderickson and not with him.

The show got off to a bumpy start around 11:15 p.m. with a problematic opening set by a local drag performer named Ophelia Hotass. “A drag show is like a strip club,” Hotass, who often performs at bars in West Chester, explained to the crowd, asking them to throw dollars on stage as she performed.

The dollars kept flying as Hotass hurled uncomfortable jokes about presenting as a lady while being a “man with a penis tucked between my legs.” There were several cringeworthy moments in which she appeared to mock gender transitioning, adopting a high-pitched voice and then lowering it to “prove” she was a man in female attire. The crowd laughed hysterically, and one drunk woman nearby me said “She looks better than Bruce Jenner.”

During the set, Hotass also frequently touched her genital area and lip-synced pop songs, injecting the phrase “tight wad vagina” into the lyrics. In the end, Hotass was pandering to a mostly straight cis-gender crowd interested in what one of its members described as “chicks with dicks” jokes. I was left shocked and stunned by this queer minstrel show, which unapologetically mocked the experiences of trans women and gender-nonconforming people. (Hotass, whose real name is Mathew DeFiore, did not respond to a request for comment about the performance.)

After roaring applause, Aunt Mary Pat came onstage to the sounds of Jon Bon Jovi’s “It’s My Life,” carrying a glass and a box of wine. Wearing a shiny sequined outfit, Hendrickson made it a point to address the elephant in the room.

“Apparently someone was offended,” he said as the crowded cheered. “We live in times where people are offended by a lot of things — I get it. There are so many people who have been silenced for so long and they haven’t been able to speak out. But I’m not the enemy, I’m your ally, I’m your friend.”

It was definitely a sobering moment for a performer whose persona, according to four trans or gender-nonconforming people I spoke with who say they have seen the act recently either in person or on video, can come off as transphobic in the way it mines the masculinized presentation of a female character for humor. (“It’s the stereotypes he presents,” said one previous show attendee. “It doesn’t help the transgender cause.”) One member of a local drag troupe told me that a fellow member suggested Hendrickson as an opening act given that he “packs them in” in Delco. The performer says he pushed back at the idea, responding that “we should really question why [Hendrickson] is packing them in in racist, homophobic Delco.”

Last night, I found out why. Hendrickson’s routine was a tried-and-true sendup of a working-class white woman stuck in her ways. (Sound familiar?) He was certainly solid when riffing on suburban Philly stereotypes, with a strong accent that delights his crowd.

“I think my character and my show appeals to a broad variety of people,” Hendrickson said in a statement to Philadelphia magazine. “As a proud queer person, a father of two, a fundraiser, a community activist and an entertainer what I do with this character is present a Delco/Philly woman in a way that challenges the notion of gender conformity rather than mock[s] gender-nonconformity.”

I didn’t hear Hendrickson make any overtly transphobic jokes or comments during his act on Thursday night — though I did note cell-phone cameras held up throughout the venue, recording his every word. But that kind of apparent self-restraint isn’t good enough for a performer who claims to be an “ally” and “friend” to trans people who have called out his act — he needs to find the courage to tell his followers to do the same.

That he did not perhaps demonstrates how well he knows his crowd. The ones who came all the way from Delco to hear “chick with a dick” jokes. Rowdy straight white people who don’t care “what the trannies and social justice pussies have to say this time.” Hendrickson essentially pulled out the stop-being-offended-about-everything card, and a crowd of people who don’t actually understand drag culture and the LGBTQ community enough to respect the people behind the wigs and makeup just lapped it up.

Editor’s note: The original version of this commentary contained an allegation that Troy David Hendrickson had previously used anti-trans language in his act. On further investigation, Philadelphia magazine been unable to independently verify the allegation and has accordingly removed it. We have also clarified the nature of the objection that the trans and gender-nonconforming people we spoke with have to the Aunt Mary Pat persona.