All the Shore Drama You Missed Since Last Summer

Memorial Day weekend is almost upon us. Here's what you need to know when you head down the Shore. 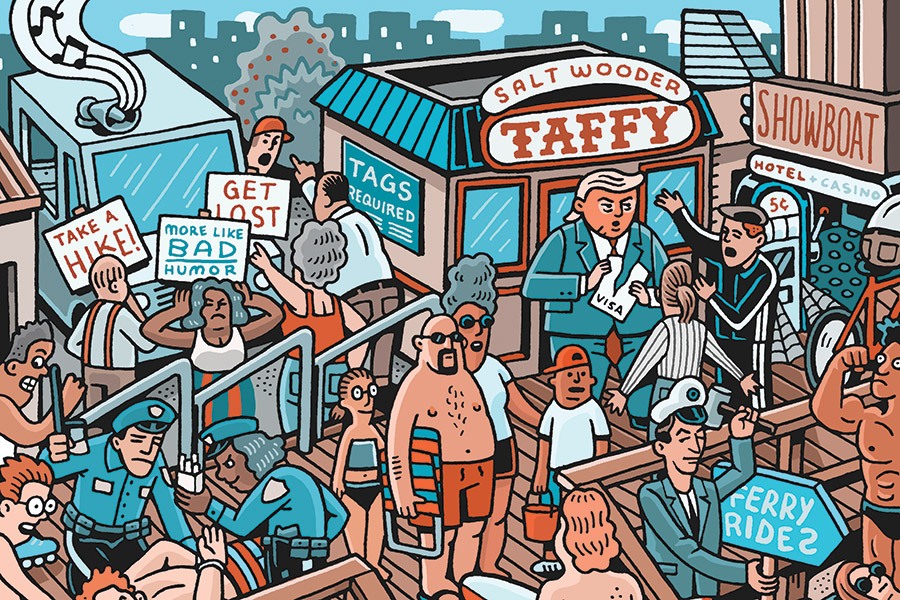 We get it: You only pay attention to the Shore in summer, when you’re there, ankle-deep in the sand, sweaty cocktail in hand. As usual, there’s been some hot action during the cold months since you last felt the sweet sting of sunburn.

Where: Avalon
The Skinny: Fed up with a few seconds of (yes, annoying) jingles, homeowners on Avalon’s pricey beach blocks proposed banning the ice-cream man. Not cool!
The Outcome: At a hearing, one resident called the idea “un-American.” It was rightly put in deep freeze by officials.

Where: All along the Parkway
The Skinny: First he ruined A.C. in the ’90s; now he’s jeopardizing the Shore’s seasonal workforce, hinting he’ll nix the J-1 visa program for international students.
The Outcome: As Cape May County businesses prep for the arrival of about 5,000 J-1 workers this summer, the visa’s future remains uncertain. Welcome to America, kids?

Butts Off the Boardwalk!

Where: Wildwood and North Wildwood
The Skinny: This isn’t about saggy pants. (Wildwood banned those in 2013.) The sibling cities passed measures prohibiting smoking on their shared boardwalk.
The Outcome: If you’re caught lighting up on the boards in 2018, expect a stiff fine — or even jail time. Stick that in your pipe and, uh, never mind.

The Showboat Must Go On

Where: Atlantic City
The Skinny: Bart Blatstein applied for a statement of compliance with NJ gaming officials in February — a clear signal the developer is looking to bring gambling back to the Showboat.
The Outcome: Regulators are looking into Blatstein’s background as he awaits a ruling.

Where: Long Branch
The Skinny: The Federal Transit Administration has been assisting Long Branch in its quest to launch ferry service from New York City.
The Outcome: Jared Kushner, son-in-law to the President, stands to benefit. His family’s biz owns the resort next to where the ferry would unload. All aboard the S.S. Jared!

Published as “Shore Drama Update!” in the May 2018 issue of Philadelphia magazine.