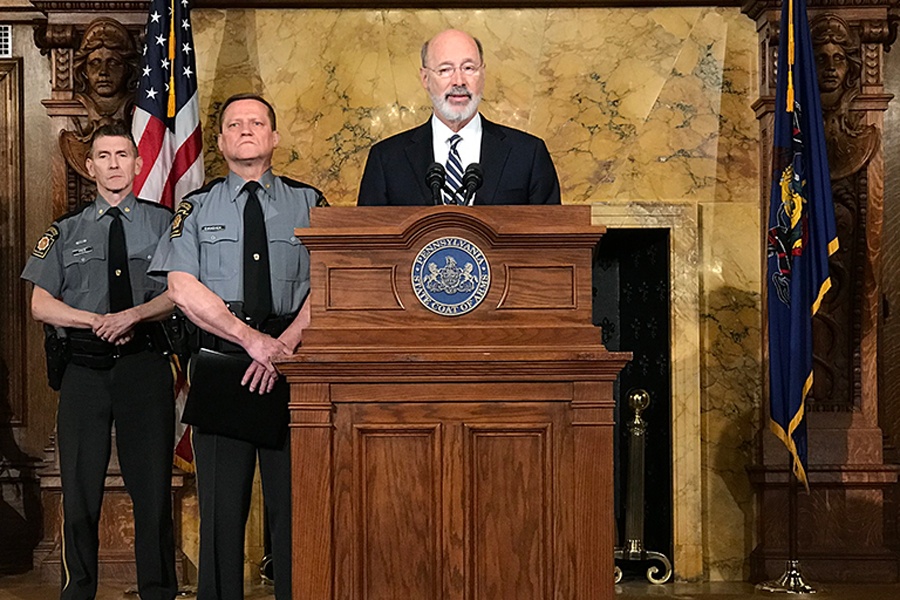 Photo courtesy of the Governor’s office.

Pennsylvania Gov. Tom Wolf and Acting State Police Commissioner Lt. Col. Robert Evanchick held a joint press conference on Monday in which both men affirmed their belief that the passage of more “commonsense” gun legislation would prove beneficial to the safety of the state’s residents.

“All of Pennsylvania’s citizens have the right to live happy, healthy lives free from fear about their and their family’s personal safety,” Gov. Wolf said in Harrisburg. “Unfortunately, in the past decades we have seen that sense of security, that sense of safety, threatened. I am calling on the legislature to take up additional commonsense gun reform bills that will help us close dangerous loopholes and keep weapons out of the hands of individuals who pose a threat to Pennsylvania’s citizens.”

If Wolf had his way, anybody who wishes to purchase a firearm in the commonwealth would need to submit to a state police background check first. He also urged the Republican-controlled House of Representatives to swiftly pass Senate Bill 501, which was unanimously approved last month. That measure would prevent domestic abusers with pending protection from abuse orders from owning or possessing guns.

“We need commonsense gun safety laws, and we need to use the incredible system the state police has built by requiring all those who wish to buy a gun to go through this reasonable, convenient background check system, so we can keep powerful weapons out of the hands of those who pose a danger to our citizens and we can keep our neighborhoods, our communities, and our public spaces safe,” Wolf said.

Universal background checks are one of the best ways we can keep weapons out of the hands of dangerous individuals. I'm calling for commonsense gun safety reform to close existing loopholes that allow certain firearm transactions between private parties without background checks. https://t.co/8jk97CtcE4

“In the commonwealth, a firearms transaction between two private parties does not require a background check if the firearm falls within certain criteria — these firearms are commonly referred to as long guns,” Evanchick said. “It is this void in the current law we are in support of changing. The Pennsylvania State Police encourages closing this void in the current law and requests that all firearm purchases and or transfer of ownership require a universal background check.”