Meet the Eagles Fan Who Brought Bourbon, a Paper, and a Big Flag to His Father’s Grave

Jeffrey Yerk’s tweet about sharing the team’s victory with his departed dad is touching fans all over the world. 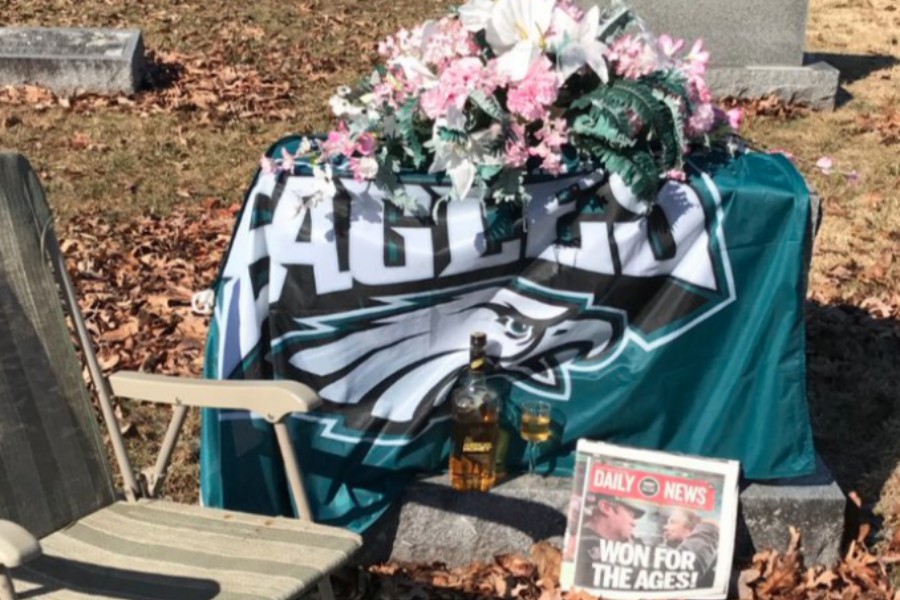 Philly has waited way too long for a Super Bowl win.

Now, on the heels of victory, Eagles fans are paying tribute to lifelong supporters who won’t be able to revel in Sunday night’s success. Philadelphians are covering their loved ones’ gravesites in Eagles gear and newspapers – and, in at least one case, bourbon.

Jeffrey Yerk, from Souderton, spent at least an hour on Monday at his father’s gravesite at the Trinity United Church of Christ in Telford, sipping from a bottle of Wild Turkey and reading the Daily News.

“It was very emotional for me,” Yerk said over the phone on Wednesday. “I got there, and I said, ‘Well, Dad, check this out – they finally did it, buddy.’ And I’m telling you, he was answering sometimes.”

Yerk said some of his “greatest memories are going to them Eagles games with my dad. The cigar smoke, the beer, the rowdiness – great times for a young kid.”

A photo he posted to Twitter of his father’s grave has gotten more than 1,600 retweets and 9,000 likes, thanks in part to Twitter featuring the picture on its “Moments” page. Others have reached out to say they’ve done the same – or to simply say the photo touched them.

Yerk said he and his family have been swept away by the positive feedback, which he said has come from fans of “every team in the league.”

“One guy said, ‘I absolutely hate and despise the Eagles, but this is beautiful,’” Yerk said. “It wasn’t intended to, but it touched a lot of people.”

“My phone, since yesterday afternoon, has not stopped beeping for 10 seconds,” he added. “As we’re talking right now, [alerts are] still coming across my screen.”

And Yerk is hardly alone here in Philly — Eagles fans throughout the area have shared similar moments.

Eagles fan Michael McGettigan bought his father, who died more than 11 years ago, a paper to read this morning. pic.twitter.com/xOZOLrgiaq

Want to know what this #SuperBowl means to my hometown of Philly? Got this text from my best friend. “I’m taking a championship t shirt to my old man’s grave today. This means so much in this town”

Oh on the way to the party I stopped by to see my mom & dad. Life time @Eagles fans. I'll be back there later today with some gear. #FlyEaglesFly pic.twitter.com/28SZfM6AG2

For you Grandpa Frank. Thanks for making us all Eagles fans for life when you bought season tickets at Franklin Field all those years ago. This one is for you. Go Birds! pic.twitter.com/PIzokPgNkI

I talked to my grandfather every Eagles Sunday. His passing in November was expected but I still found it odd that I didn't cry when my dad told me he passed. Today I had to pull over sobbing because I couldn't call him to celebrate. He would have loved this. #FlyEagelsFly pic.twitter.com/Gmzu4MLlKI

on the week marking 8 years since my grandpa’s passing, I placed eagles balloons and an inquirer on his grave today. Last night would have meant everything to him. There were quite a few people at the cemetery doing the same thing I was. Way more than a game. It’s family.

Bittersweet- so many loved ones we wish were still with us to celebrate the birds super bowl victory! The cheering section in heaven spans generations! One of our friends decorated his parent’s grave..Did anyone else? #fox29goodday @FOX29philly pic.twitter.com/c1YV4bZA9q

My dad is surely dancing on his grave right now in the Eagles sweatshirt we buried him in! #loveyoudad #Eagles

Gotta remember to put some eagles stuff on my grandpa grave