We chat with the popular local DJ on community, activism, and calling out discrimination in the Gayborhood. 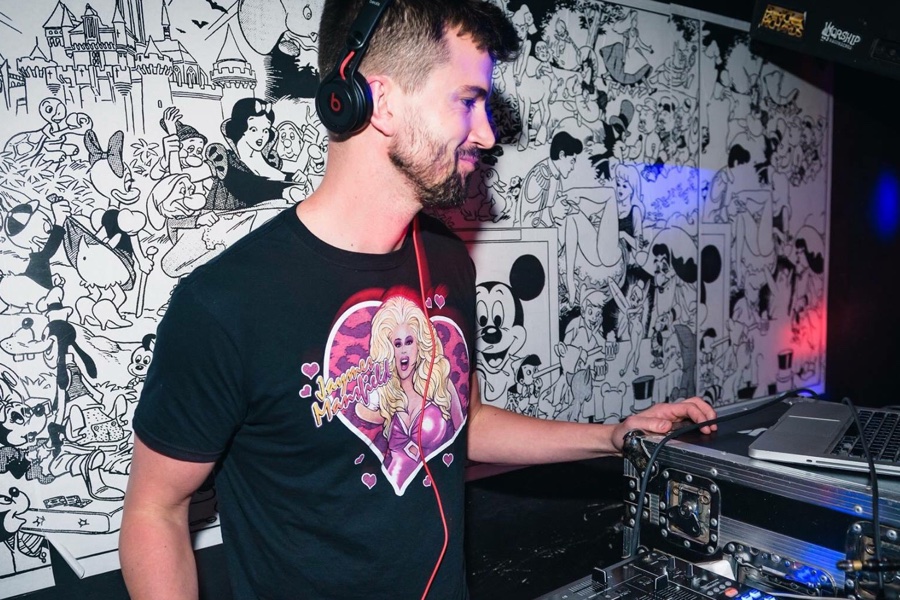 Matt Beierschmitt is best known as DJ Sharyn Stone, the Gayborhood party rouser who provides some of the biggest sounds and beats at popular queer events. We chatted about how he has transformed his local visibility into a way to shed light on timely issues affecting the community.

Tell us a little bit about yourself.
I am from Collingswood, New Jersey. I was the All-American Gay Kid. I was, and still am, a mama’s boy. I played sports to try and fit in and came out as soon as I could to a very supportive family. I am blessed. I attended Rutgers University in Camden, where I received a degree in political science. The weekend after I received my degree, I moved to D.C., where I did mostly program and event management for nonprofits. After almost seven years, I felt like it was time to come home, and I’ve been back now almost six years.

You’re a very popular DJ in the Gayborhood. What has been your general experience so far in the community?
My experiences as a DJ have been great up until recently. I DJ’d at Boxers for over three years and was recently let go for a “new direction.” Otherwise I fill in here and there: BarX and the Bike Stop occasionally. I DJ the NSFW Dance Party and Dragarella! This party is always outside the Gayborhood, demands openness and body positivity and there is no dress code. The less clothes the better, actually. We always bring in a guest DJ to mix it up, and the venue is always secret up until the night of. This allows the party to be more uninhibited and let people feel like they are in a safe space to be themselves. Plus, we play fresh new music and classic hits. It’s a special party.

You also make it a point to donate your services for charity causes, especially HIV/AIDS advocacy organizations. How has that particular cause affected you personally?
I am 36. I was coming out on the tail end of the AIDS epidemic. I also worked at Woody’s for five years while I was in college, and I can’t tell you how many amazing HIV+ people I have seen pass away, but I know even more who are surviving and living normal amazing lives. I work full time for the AIDS Fund and don’t make a ton of money, so volunteering for amazing organizations like AIDS Law Project of Philadelphia, Action Wellness, MANNA, serving on the board for Brian Sanders’ Junk and chairing their annual Snowball Gala and whoever else asks me, is my way of giving back. Event DJs are not cheap, so they can use my fee for someone who needs it. I ultimately volunteer for my poz friends dead and alive. I love them. They are magical.

You’ve garnered a lot of attention over the past year for calling out racism and discrimination in the Gayborhood. What has prompted you to speak out so frankly?
Racism, transphobia, misogyny, HIV/AIDS stigma, fat shaming, femme shaming, and other issues that have been around the LGBTQ community for as long as I can remember have never been cool with me. I try to do my best to avoid that behavior and people who exhibit it. The tipping point for me was the iCandy N-word tape. To see people in the LGBTQ community the next day checking in at iCandy and defending the owner made me realize some people just don’t care for anyone but themselves, and that the oppressed have now become the oppressors. I also realized that it’s not POC’s job to hold white people accountable. It’s ours. So I just started speaking up, stating facts and calling out bullshit where I saw it. A lot of people didn’t like, but my hand to God, twice as many people tell me to keep going and reached out privately thanking me. I try to base my arguments on facts, but those don’t even matter these days. Privilege blinds people. First-hand accounts of people being discriminated against and videos of people being hateful are considered fake news. I wish it was fake, but racism is in the LGBTQ community, and we need to talk about and most important listen to those saying that it’s happening.

If you only had one stern piece of advice for those who are complicit with the current issues in the Gayborhood, what would it be and why?
The road to equality is not a top-down approach. If you fix the problems on top first, then the ones below are neglected. We need to fight from the bottom up, and white people, white cis gays in particular, who want to claim our community for themselves but do not elevate the rest of it need to step back and push up those who aren’t being heard. We need to speak on behalf of those who are afraid or quite frankly just don’t have the privilege that we do by being white. We can say a lot of shit and get away with it and not be deemed an irrational or angry brown or black person. That’s using your privilege for good. Finally, we need to not condone bad behavior because some people think it’s OK. If just one person doesn’t want me to call them something or do something because it legitimately offends them, then I don’t do it. What do I lose? Nothing. What do they gain? Knowing they’ve been heard and validated. I could go on and on, but that’s it for now.