Is Philly’s Club Scene Blowing Up?

Don’t worry, it’s not Delaware Avenue redux. But we could be seeing the dawn of a new era in Philly nightlife. 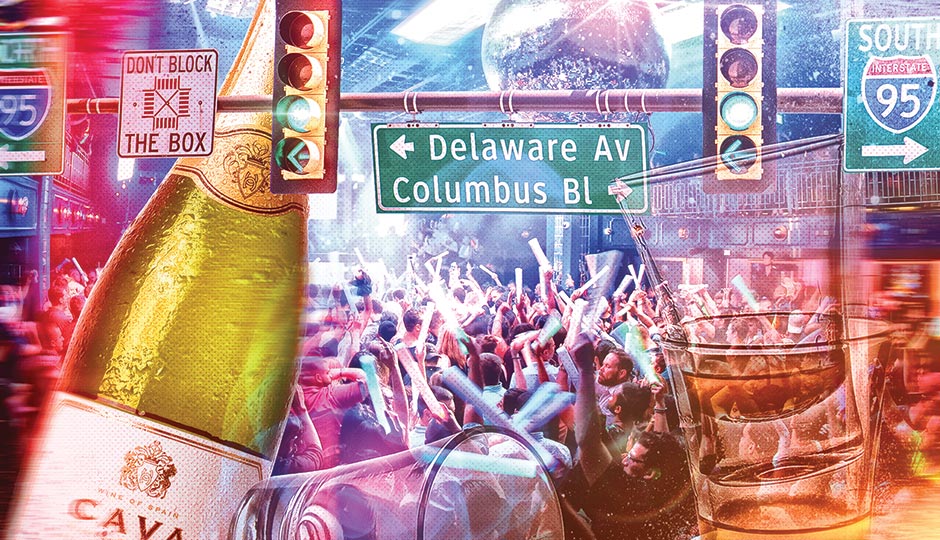 On the Sunday of Memorial Day weekend, I stood a few feet from Steve Aoki as he hurled 10 frosted sheet cakes at ravers dressed in neon CAKE ME t-shirts in the sweaty crush of a nightclub. The superstar DJ, an EDM darling with his own Netflix documentary, trots the globe performing at big-deal festivals like Belgium’s Tomorrowland and Vegas’s Electric Daisy Carnival. But I didn’t hop on a plane to see Aoki spin. All it took was a 10-minute Lyft ride from West Philly to 1209 Vine Street, where NOTO, Philly’s only 1,000-capacity nightclub, opened to fanfare (and a few eye rolls) back in February.

With its Connecticut backers and their extravagant plans, NOTO rubbed some the wrong way. And at that Aoki bash, I witnessed some things that didn’t feel quite Philly. For one, the crowd seemed thrilled to be in a ritzy big-room club — walls adorned with Caravaggio-inspired art, chandeliers made of vintage perfume bottles — that was starkly different from other Philly clubs’ low-key vibes. That night I spoke to attendees (some newly legal drinkers, others 56-year-old parents) who came in from New York, D.C., and as far as Florida. They gladly paid $12 for one-liquor drinks — some forked out $6,000 for bottle service — and waved NOTO-branded light sticks at a Phillies-jersey-sporting Aoki. The rave ended with the crowd chanting “Trust the Process” and Joel Embiid towering over the stage awash in lights, smoke and confetti, his arm slung across the DJ’s shoulder for a Snap. The droves skated out at 1:50 a.m. across the floor’s coating of vanilla frosting and sprinkles.

This wasn’t my first time at NOTO, and the scene is lit even without a superstar headlining. It’s just the latest in a newish wave of bigger trendy spots — think Center City’s Rumor, Coda and Down — that make scene observers wonder if there’s something afoot. Is Philly looking at the dawn of a new mega-nightclub era, conjuring memories of seedy Delaware Avenue in the ’90s? Or is this simply the latest exciting iteration of Philly’s club scene?

“Those days are over,” says Mark Marek, owner of Rumor, bluntly dismissing as a “blip” the time when Delaware Avenue was home to behemoths like KatManDu, Rock Lobster and Egypt and club-goers descended on the stretch by the thousands. Over the decade, those clubs closed down, victims to rowdy behavior, crumbling infrastructure (the Club Heat collapse) and changing tastes, giving way to lounges and bottle service.

“The city is much more neighborhood-driven now,” says NOTO director Ryan Dorsey, who got his start in clubs as a bar-back on Delaware Avenue. NOTO, for one, signed a “community benefits agreement,” essentially a pledge to be a good neighbor, and the crime stats show it’s keeping its pledge. And Steve Aoki nights notwithstanding, the millennials moving to Philadelphia, Marek figures, don’t want to pay a cover or for expensive drinks.

Still, bigger, continually bumping venues like this add a certain cachet. “They put such a big investment into NOTO, and they’re getting DJs that would usually pass on Philadelphia,” says DJ Excel, 37, who cut his teeth on Delaware Avenue but left Philly for Los Angeles in search of bigger gigs when that circuit started drying up.

What’s driving the new wave? It appears that Philly’s burgeoning tech and restaurant scenes are part of it. Marek figures that Comcast, for instance, is filling a new skyscraper with young potential club-goers. Plus, festivals like Made in America and the Roots Picnic and national events like the DNC and the NFL draft have an impact. Local DJ Aktive, 36, who’s worked with the likes of Kanye West and Janet Jackson, has noticed: “We’re getting so many people in the city from these events who weren’t stopping in before.” Which means that Philly’s rising profile seems to be having ripple effects all over.

Published in the August 2017 issue of Philadelphia magazine.