If you weren’t there when we were Tankadelphia, we don’t need your support on the road to Titletown. 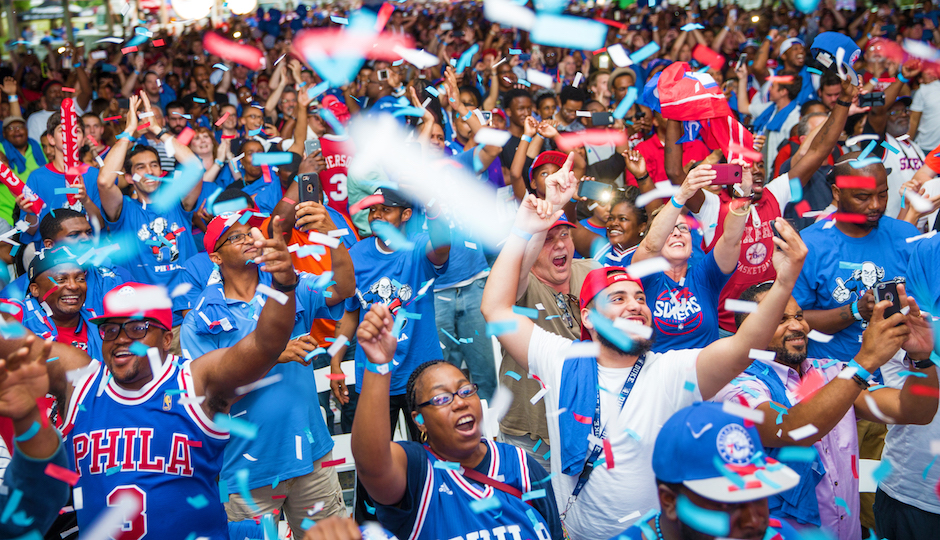 Photo courtesy of the 76ers.

I’ve paid my dues as a 76ers fan these past few years, and I know I wasn’t alone. We might not have met personally, but I know you were there in the nosebleeds too. I saw you sitting among the sea of empty red seats, wearing an Andrew Bynum t-shirt both out of spite for that hack and for the humor in how he came to usher in a new era of Sixers basketball without ever stepping on the floor.

I was just a section over in my Jerry Stackhouse jersey, hopelessly cheering on the likes of K.J. McDaniels, JaKarr Sampson and Royal Ivey. (If you haven’t heard of them, it’s because you probably shouldn’t). The atmosphere at Wells Fargo Center during those tanking seasons that followed Bynum’s medical redshirt year was still full of passion, even at times bordering on electric. This is still Philadelphia, after all.

But man, most of those games were just brutal to watch – a real train wreck on the court. Us fans in the stands were there to support our team regardless of their lack of talent, and we still showed love to those guys despite the fact that they didn’t really belong in the NBA. Jerry Seinfeld has a great bit about how sports fans in essence root for their city’s clothes – a sentiment that perfectly sums up my fellow diehards, forced to utter the phrase “never heard of him” far too many times while following the Sixers during Sam Hinkie’s reign.

Now having traded for the first overall pick in Thursday’s NBA Draft, there’s a considerable buzz surrounding the team with this deal signifying that Hinkie’s (unjustly) maligned “Process” is complete. It’s an exciting time to be a 76ers fan, but sorry, we’re no longer accepting applications.

That core of young talent with superstar potential that we’ve been promised is finally here, complete with rumors that general manager Bryan Colangelo may soon add another established veteran to supplement. But only the worthy few should be permitted to bask in their future glory. If you never tried to convince yourself that Tony Wroten could end up sticking around, or if you don’t know what number Spencer Hawes wore – we don’t need you.

That also goes for anyone who thought that trading Michael Carter-Williams and his broken shot would come back to bite us in the ass, as well as the fools that preferred to build around guys like Thaddeus Young and Evan Turner than tank.

See, I’m a purist when it comes to sports fandom. You root for your own city’s team and that’s it. Exceptions can be made for following the teams of wherever your family originates from, but there is just too much bandwagon hopping in sports today – basketball especially. How many people remained Miami Heat fans when LeBron James went back to Cleveland?

While I can understand why some Sixers “fans” checked out during the past few seasons, it doesn’t excuse the behavior. And don’t even get me started on those pesky out-of-towners trying to join the ride. We all loved Allen Iverson when he was playing, but that doesn’t mean the guy with no loyalty from Chicago gets to be a Sixers fan when we’re making our championship run. If you want to be all in now, you better have been all in when tickets dipped below $1 on StubHub because the team was so bad. I know I still have my stubs from those days, do you?