William Penn Is Getting a Facelift

The iconic bronze statue atop City Hall is being refurbished for the first time since 2007. 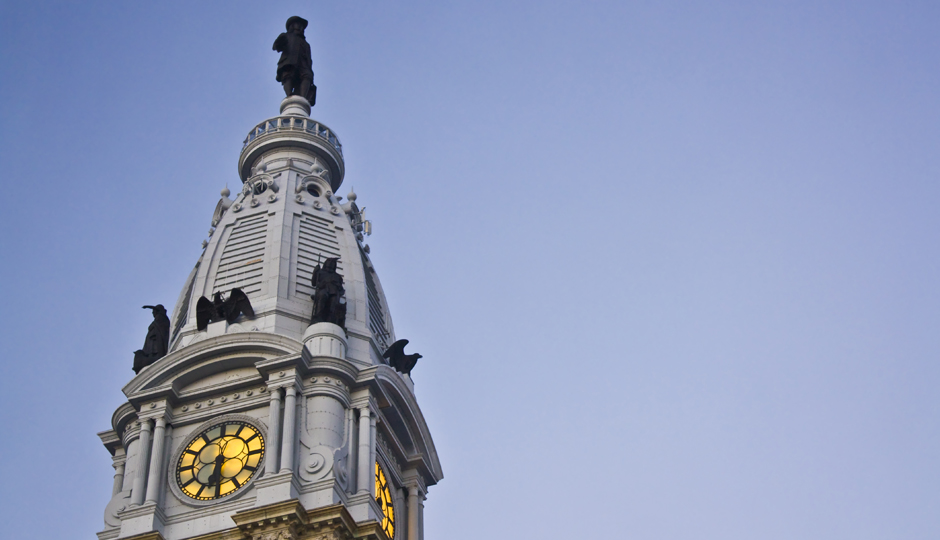 It’s been 125 years since Alexander Milne Calder’s 37-foot-tall sculpture of our city’s dear founder was placed high on its perch above Broad Street. (He’s looking at you about 500 feet off the street level, to be exact.) To celebrate this momentous occasion, the city has decided to dust off its scaffolding and give old Billy Penn his first cleaning in a decade.

The four- to five-week process consists of inspecting both the exterior and interior of the statue before it is treated with a low-pressure, deionized water system and nonionic detergent. A laser (yup) is then used to remove corrosion in the pitted areas that developed as a result of the sculpture’s casting.

After his cleaning, Penn will then be hit with a specially formulated protective wax coating and buffed to a shiny finish.

“The William Penn statue has endured as a symbol of Philadelphia since its installation in 1892. Conserving this monumental statue, and having the opportunity to view the astounding level of detail in Calder’s work, is an extraordinary experience,” Margot Berg, public art director for the city’s Office of Arts, Culture and the Creative Economy, said in a release.

Staging for workers first went up May 1st, while actual conservation efforts kicked off earlier this week. The city has mandated that the statue, which weighs more than 26 tons, be cleaned every 10 years or so to “prevent the deterioration of the bronze caused by atmospheric conditions and the accumulation of corrosion on the surface.”

The sculpture was cast in 1888 at the Tacony Iron Works in Northeast Philly. It is currently the largest statue atop any building in the entire world. Conservation work on the bronze was previously undertaken in 1987, 1996, and 2007.

“The conservation of the 125-year-old William Penn statue is historic,” Mayor Jim Kenney said in a release. “The sculpture is known all over the world as a symbol of Philadelphia, so I am excited that this process will ensure that future generations will be able to be as awed by it as I am.”

A grant provided by the National Endowment for the Arts helped pay for the project along with city capital funds and private donations.