The program's latest addition — “76ers: Beyond the Court,” at Broad and Federal — pays homage to the team's rich history and commitment to the community. 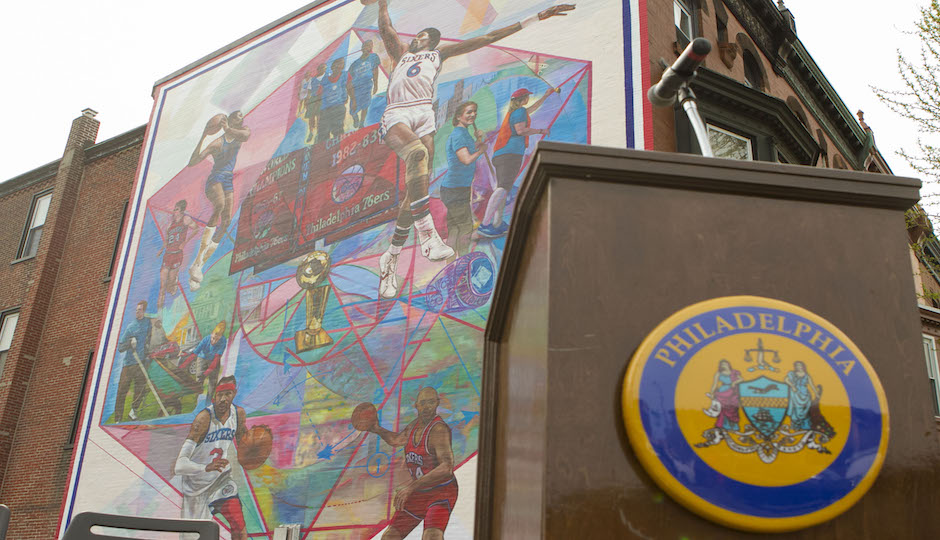 Mural Arts Philadelphia unveiled its latest piece at the corner of Broad and Federal streets – a 37-foot tall collage dedicated to the 76ers and the team’s commitment to service in the local community. 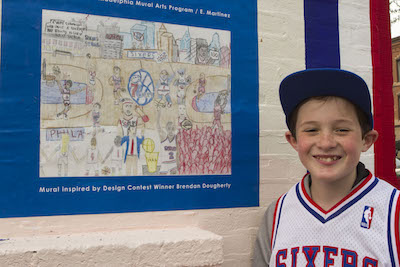 “You know we like sports murals at Mural Arts, and we believe really deeply that the murals are the autobiography of the city and our sports teams speak about us,” said Jane Golden, the founder and executive director of Mural Arts. “I want to thank the 76ers for having the creativity to know that art is important.”

On hand representing the Sixers at the ceremony were CEO Scott O’Neil, 1983 Sixth Man of the year Bobby Jones (whose likeness is also on the mural), radio announcer Tom McGinnis, and legendary Philadelphia basketball ambassador Sonny Hill.

Each employee of the team is required to pledge 76 hours of annual community service, a policy that fits the Sixers’ overarching mission to work hand in hand with the city.

“We talk about the legacy-type impact that we want to have on the community,” O’Neil explained. “Some of the things we do are about working with schools and impacting kids, and the legacy of that hopefully changes the trajectory of their lives and impacts their families for years to come. This is more of a celebration. We’re certainly not splitting atoms or saving the world here, but it’s a nice feel for the city and great for the brand of the Sixers being out and about on Broad Street.”

It took 127 gallons of paint and roughly 1,270 hours to install the mural, which can be found on the side of a residence adjacent to the Pep Boys parking lot. More than 600 people helped complete the project.

“Mural Arts is more than just murals,” said Councilman Mark Squilla, a South Philly native. “Mural Arts is really something that the city is proud of because they reach into our communities and help the people who need help the most. They go out into our neighborhoods that are struggling and give people a reason for hope.”

This latest work is number 4,001 for Mural Arts and is the program’s third Sixers-related commission. A mural honoring Doctor J is located at 13th Street and Ridge Avenue, while another celebrating Olney’s own Wilt Chamberlain can be seen at 13th and Vine streets.