The U.S. Department of Labor says the restaurants incriminated themselves in their own handbook. 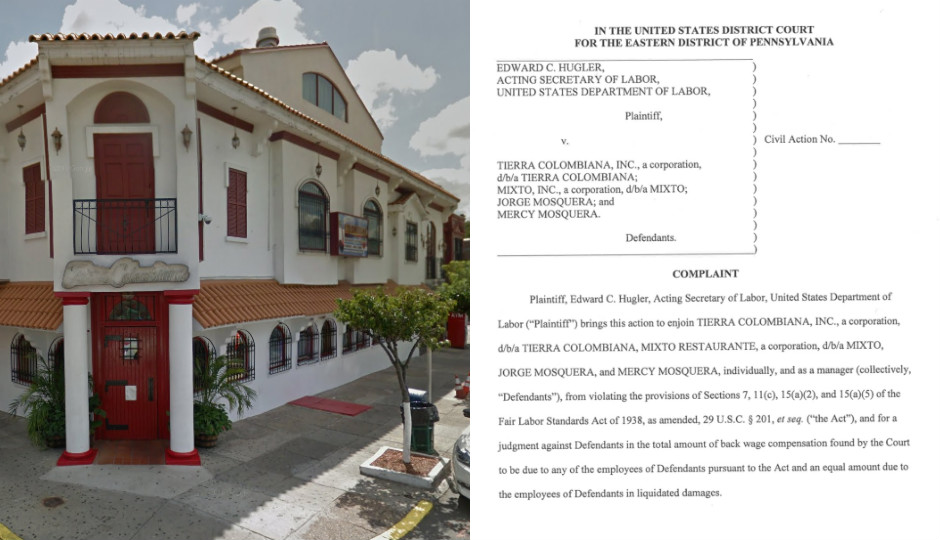 The U.S. Department of Labor has filed a Fair Labor Standards Act complaint against Mixto and Tierra Colombiana, alleging that the Latin American restaurants failed to pay their employees overtime.

According to the filing, the popular Philadelphia eateries gave their workers a handbook that explicitly laid out their no-overtime policy: “Mixto/Tierra Colombiana does not pay overtime. Every extra hour will be paid as a regular salary.” The federal government also accused Mixto and Tierra Colombiana of not keeping records of their workers’ wages and hours.

“During the time period from at least October 31, 2013, through at least November 1, 2016, [the restaurants] failed to compensate their employees, including servers, bartenders, hostesses, runners, bussers, bar backs, kitchen chefs, and dishwashers, who worked over 40 hours in a workweek, one-and-a-half times their regular rate for hours worked over 40,” reads the complaint, which was filed last week in the U.S. District Court of the Eastern District of Pennsylvania. “Workweeks for these employees ranged from approximately 40 to approximately 60 hours, but the employees did not receive time and-one-half their regular rate for their overtime hours.”

A man who identified himself over the phone only as the general manager of Tierra Colombiana declined to comment on Monday. Jorge Mosquera, who is named in the complaint as a defendant as well as president of Mixto and Tierra Colombiana, did not respond to a request for comment via email.

The action calls for the restaurants to pay “back wages and an equal amount of liquidated damages” to current and former employees.

The Restaurant Opportunities Center, an advocacy group for service industry workers, says employees are often not paid overtime in Philadelphia. According to a 2012 survey by the organization, 58 percent of polled restaurant workers “reported experiencing overtime wage violations.”

Last year, Philadelphia magazine found that the U.S. Department of Labor was investigating local restaurant Talula’s Garden over allegations of wage theft. Joanna Hawkins, a spokeswoman for the department, said this week that the investigation is ongoing.

Hawkins declined to provide more information about the complaint against Mixto and Tierra Colombiana.

Department of Labor Complaint by PhiladelphiaMagazine on Scribd