Shannon DeVido's PPA horror story is probably better than yours. 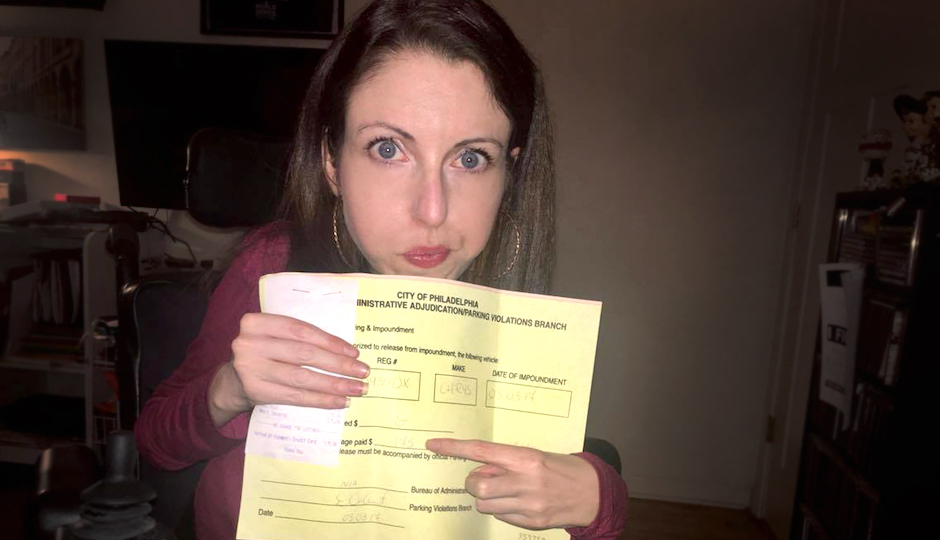 Shannon DeVido with the receipt showing her $175 payment to the PPA.

Everybody we know seems to have a good story about how the Philadelphia Parking Authority has screwed them. But local actress Shannon DeVido’s PPA story trumps most.

DeVido is a singer, comedian, and actress with a recurring role in the popular Hulu show Difficult People, in which she plays a comedian in a wheelchair. The 34-year-old Bucks County resident was born with spinal muscular atrophy, and she’s been in a wheelchair herself since the age of five.

Last Friday night, DeVido decided to head into the city with her friend and fellow comedian Aubrey Williams to see a short-film showcase at the Prince Music Theater, at 15th and Chestnut.

DeVido drove her Chrysler Town & Country, which was converted to allow her to drive it while sitting in her wheelchair. There’s no front seat, and instead of a steering wheel, the vehicle has a control reminiscent of something a pilot would use in an airplane. She pushes forward to accelerate and pulls back to brake. The van has a handicap license plate, not one of the placards people hang from the rear-view mirror.

As she pulled onto Chestnut Street, DeVido saw an handicap-accessible spot on the block and pulled in. According to DeVido and Williams, who was with her in the van, a car showing no handicap credentials was poorly parked in the spot in front of the handicap spot, so DeVido couldn’t pull all the way in. 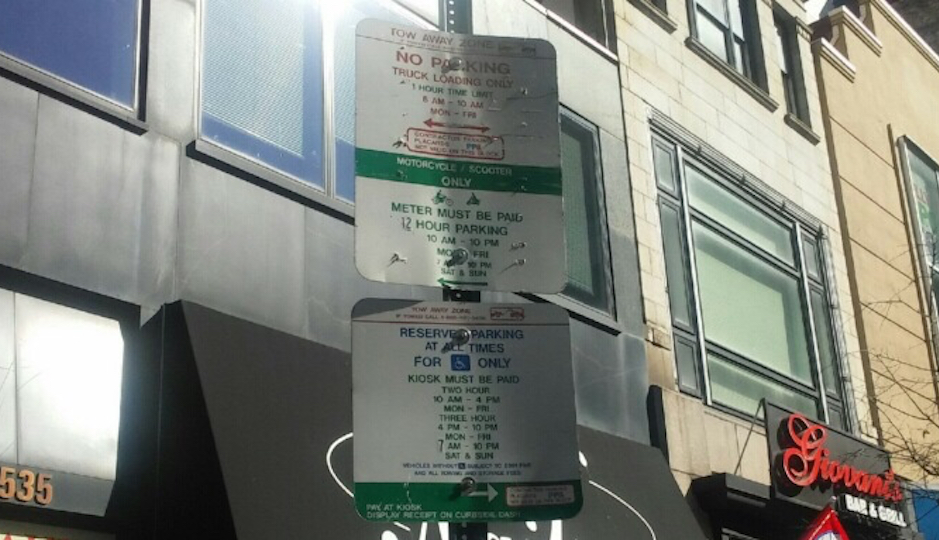 The signage where DeVido parked. (Photo by Megan Sawey)

The rear of her van was over the boundary of the handicap spot, extending into the parking zone designated for motorcycles and scooters. But DeVido swears it was only over “by a little,” and Williams, who helped guide DeVido into the spot so that she was in it as tightly as possible, agrees. 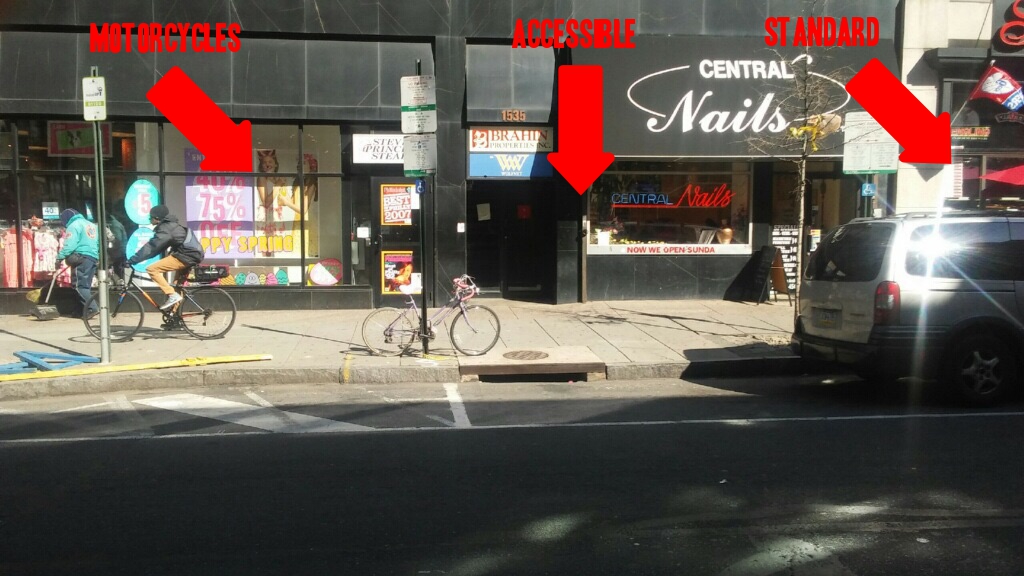 DeVido bought a parking voucher from the nearby kiosk. Three days later, she can’t find the little slip of paper, but she says that she parked at 7:32 p.m. She remembers the time clearly, because she looked at the clock, worrying about being late for the show.

You know what happens next.

Around 9:30 p.m., DeVido and Williams came out of the Prince, only to find that her van was gone.

“At first, I thought I must be on the wrong block,” DeVido told us. “But then I realized that the car was just not there. And it’s not like someone would have stolen it. If you take one look through the windows, you will see that this is not a car that just anyone can drive. I mean, there’s no front seat. There’s no steering wheel.”

DeVido saw the PPA phone number on one of the parking signs and called.

“They told me that they did indeed tow it,” DeVido says. “And they told me I had to come down and get it.”

Of course, that’s easier said than done if you’re DeVido.

Eventually, DeVido found an accessible 215-GET-A-CAB taxi-van, which brought her down to the PPA impound lot in deep South Philadelphia. It was then that DeVido learned that a PPA agent had issued a $51 ticket for being illegally parked in a motorcycle zone. That ticket was recorded at 7:34 p.m., two minutes after DeVido claims she parked.

She paid $175 to get the van out of the impound, and she still has the $51 ticket outstanding.

“I find it really weird that they would take my car when it really wasn’t that far out of the spot,” DeVido observes. “It’s a handicap van. You have to think a little bit ahead about what might happen if you tow a vehicle like that. Why not just give it a ticket and call it a day? It’s just bizarre.”

In less than two hours, the van had been towed. It wasn’t parked in front of a fire hydrant. It wasn’t blocking pedestrian traffic. It was partially in a motorcycle zone. That’s it.

Hell, even if the van was parked completely in a motorcycle zone, why not just write the ticket? Who is likely to be more inconvenienced: the motorcyclist who has to find another place to park or the person with the handicap license plate and the van with no front seat?

When reached for comment, the Philadelphia Parking Authority told Philly Mag that there’s nothing to see here. As far as the PPA is concerned, the van was illegally parked, and the PPA agent did the right thing by writing the ticket and calling for a tow. After all, the top of the parking sign reads tow away zone.

But was the van illegally parked? PPA spokesperson Marty O’Rourke says that a ticket is issued “if a vehicle is parked half in an illegal zone.” DeVido and Williams swear that it wasn’t. Before a vehicle is towed, the PPA does take a picture. Unfortunately, the only picture they take is of the car’s license plate. Very helpful.

“Three or four years ago, I got a ticket for illegally parking in a handicap spot even though I had the handicap plate,” she says. “I told them I wanted a trial. So I go down there in my wheelchair and I just looked at them and said, ‘You gave me this ticket … um, I don’t really know what to say.’ They asked me for proof, and I was like, Yeah, I’m sitting in front of you. That wasn’t good enough proof for them. They wanted to see the license plate. It’s just ridiculous.”