We chat with the new Office of LGBT Affairs director on her position, combating Gayborhood racism, and continuing Gloria Casarez's legacy. 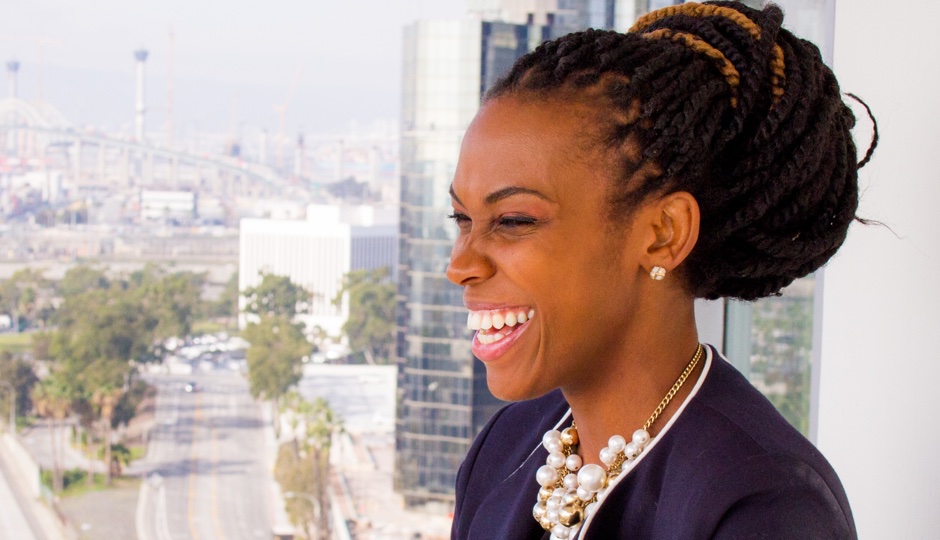 Amber Hikes, the new executive director of the Office of LGBT Affairs, has served in community leadership positions at the Attic Youth Center, William Way Community Center, Philadelphia Dyke March, and many other organizations. We chatted with the unapologetically proud black queer woman on her goals in combating Gayborhood racism, things she’s never told anyone, and following in the footsteps of one of her favorite mentors, the late Gloria Casarez.

You’ve been a notable figure in the Gayborhood for years. What’s a few things most people in the community don’t know about you?

Haha — maybe that I was born in Okinawa, Japan. Or that the first queer event I participated in in Philly was co-ed queer wrestling at the William Way Community Center. But that’s a story for another day. In all seriousness, most people know about my later work in the community through my serving on boards of LGBT organizations, and through my business, but not many know that I got my start in Philly’s LGBTQ community at the Attic Youth Center and Equality PA. When I was a grad student at Penn, I served as a social work intern working with Attic youth. I ran counseling groups, did individual counseling, and volunteered. The problem was, by the time I made contact with the youth, many of them had already experienced significant trauma, whether it was homelessness or bullying and harassment at schools, at home, and even in the community.

After hearing stories and being frustrated about what little I could do after the trauma occurred, I decided to spend my next year working with Equality PA to address the issues on the front end. I worked with an attorney on the newly created Youth Law Project. Our job was to connect students with support and resources they needed to combat discrimination. At the time, we had seen a surge in hate crimes in schools, and oftentimes school administration was refusing to act on it. We also worked with trans youth at the Youth Study Center (now Juvenile Justice Center) who were being misgendered and experiencing severe harassment after being placed in detention facilities that did not align with their gender identity. We also worked extensively with Philly police on sensitivity training/cultural competency after discovering that LGBTQ youth (specifically of color) were reporting being harassed by police on the 13th Street corridor in the Gayborhood. I’m incredibly proud of that early work with those phenomenal organizations. I credit them with exposing me to some of my most significant interactions regarding social justice and instilling me with my passion for working with LGBT youth.

As a queer black woman, what has been your unique experience in the city’s LGBTQ community — both difficult and inspiring?

What’s particularly unique about my Philly experience is that I’ve been fortunate to exist in Philly’s LGBT community in a multitude of ways. First as a student on the front line, then as a social worker and professional, then as a business owner, and finally as a community leader. That range of experience is inspiring because I am a living example of this city’s capacity to grow you, build you, and mold you to lead. While Atlanta may be my hometown, Philly truly raised me. This is home. I came into my own here. I became me here.

The flip side of the coin is that I’ve seen a lot of Philly’s more challenging areas. W.E.B. DuBois spoke about double consciousness as a Black American. So he referenced this struggle of uniting one’s identity as a Black person and as an American in a country that has historically and systematically oppressed you for years. As a queer black woman, I can take DuBois’s double consciousness and fracture it exponentially. That’s what it’s been like to live, work, create, build, and love in this city for all this time. It’s often felt like a fracturing of myself.

In each of my roles and capacities over the years, I’ve seen the racism, the sexism, the transphobia, the xenophobia, the discrimination within our OWN community. I’ve seen it, and I know firsthand that we have a lot of growth to do as a community. I’ve also seen our resilience again and again, and I know we have the capacity to get there. Just the conversations we’ve seen happening lately are evidence that our community is moving in the right direction.

You’re the new executive director of the Office of LGBT Affairs. You’ve been acquainted with your predecessors in some way, shape, or form throughout the years, but none were as close to you as the late Gloria Casarez. What does holding this position means to you personally?

Where do I start? Thinking about G always makes me so emotional. It’s no secret that Gloria lit the way for me and so many others. For me, a queer brown girl, Gloria was a giant. She was dynamic, outspoken, fearless, and unapologetic. She was the living, breathing proof that queer people of color are not only here — we are competent, capable, and needed. Quite simply, she was my icon. It was an honor to protest and share a bullhorn with her year after year with the Philadelphia Dyke March. It was an honor to serve with her as community leader. It was an honor to be introduced by her when I served as Grand Marshal for Philly Pride. It is an honor to be beside her on her gorgeous mural on 12th Street. Following in her footsteps and her profound legacy by serving this great city that we both love so dearly is one of the greatest honors of my life, and I will live every single one of my days honoring Gloria’s work and this wonderful city. I am humbled.

You enter this role during a time when incidents of Gayborhood racism, transphobia, and social marginalization are being called out more openly within the community. How do you plan to address these issues more proactively than your predecessors?

Racism is a real issue, it’s not a new issue — most LGBT people know that it exists and it’s all coming to a head. I’ll say this — many of the white business owners and community leaders are very aware of the racism and discrimination that goes on. Before I was in this capacity, many of our prominent leaders talked openly to me about issues of racism they’ve seen FOR YEARS. They’re aware of the problems, but I honestly don’t know that they even knew where to start.

I’ll say openly and on the record that that’s why the recent activism of so many people and groups has been transformative. It’s pushed the conversation forward. More than that, it’s forced accountability and a collective consciousness about these issues, and that’s a blessing. As Audre Lorde said, “Your silence will not protect you.” I’m seeing people of all races taking that reality to heart, coming out of the shadows, speaking their truth, and coming to the table to have the hard conversations. That’s the first and greatest step. That being said, it’s impossible for one person in one office to address such a pervasive and longstanding issue. This has been and will continue to be a team effort. I’m encouraged by the work that has been done by my predecessors and by PCHR.

I’ve also had a chance to review the PCHR report, and I look forward to working with Rue [Landau, executive director of PCHR] and the commission on their continued outreach to the Gayborhood. I feel my background in social work will be helpful in this work, as I have experience in working to address trauma — and make no mistake: That’s what we’re talking about here – trauma. In addition, I am, by nature, more of a proactive than reactive person. I plan, prepare, and execute. My goal and intention is to move away from a reactive approach. As it stands now, an event happens, we hold a meeting/forum, then we address it. I look forward to convening proactive community dialogues with the LGBT community on a consistent basis. What if we went out into the community and held forums before events happened? How would that change 1) our understanding of the community, and 2) our ability to address concerns before they become debilitating issues for community members?

With the newly appointed Commission on LGBT Affairs now a part of your department, a more focused community engagement agenda, and previous Gayborhood connections, what is the one major aspect you want to change about how LGBTQ Philadelphians view the office?

Transparency, communication, visibility. This is an office of the people and of the community. I’m looking forward to working with the LGBT commission to designate our priorities for the coming years and inform the best way forward so that all LGBTQ individuals can feel affirmed and supported by our government and protected from all forms of discrimination.

I want our community to not just feel heard, but to know and trust that they have a direct line to the city. My greatest priority is bringing this office to the people. If at the end of my tenure, the LGBTQ community (especially our most vulnerable and underserved members) feels heard, understood, represented, and celebrated in Philadelphia, I’ve done my job.