Franklin Institute's chief astronomer and space expert gives us the deets on the New Horizons pictures. Last week, when NASA’s New Horizons mission sent over the first high-resolution images of Pluto, the world got very interested in what they meant, and why it could matter to us on Earth. I’m not the most scientifically inclined person here at Philly Mag, so naturally I had some questions about these Pluto photos, for instance: “Why the heck should we care about a chunk of ice and rock billions of miles away?”

Derrick Pitts, Hon.D, the Chief Astronomer and Director of the Fels Planetarium over at the Franklin Institute, was kind enough to humor me. He tells us all we need to know about the ninth celestial body orbiting the Sun. (Stay tuned on that “orbiting” bit…) 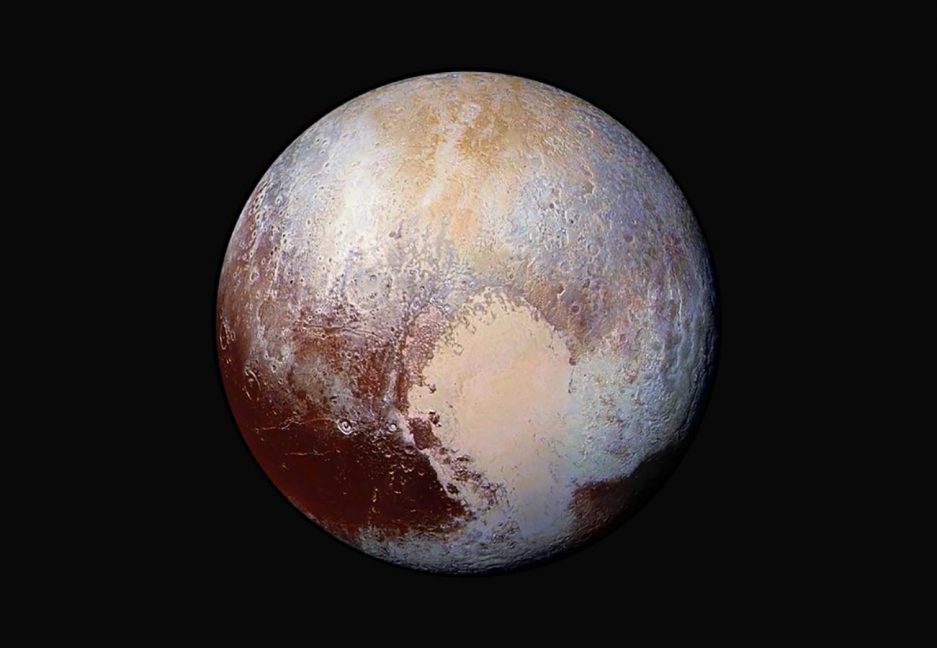 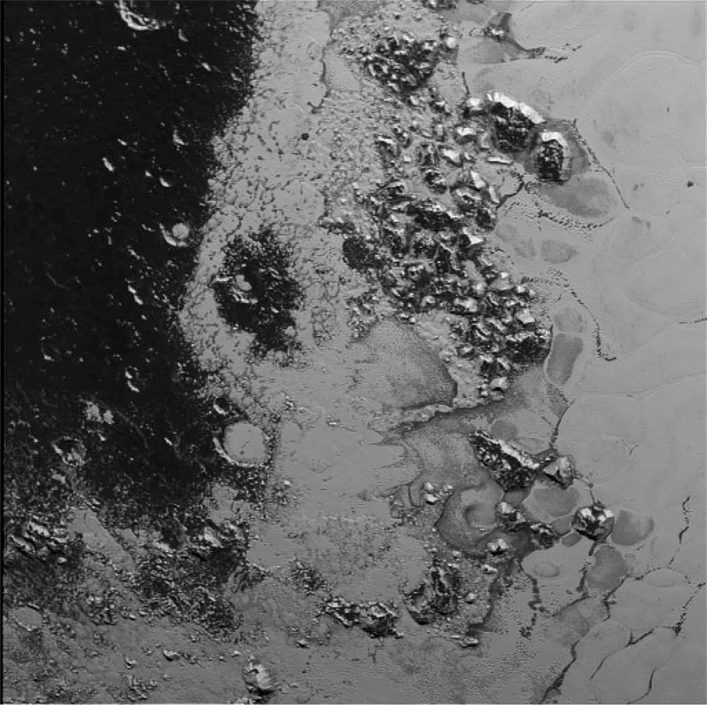 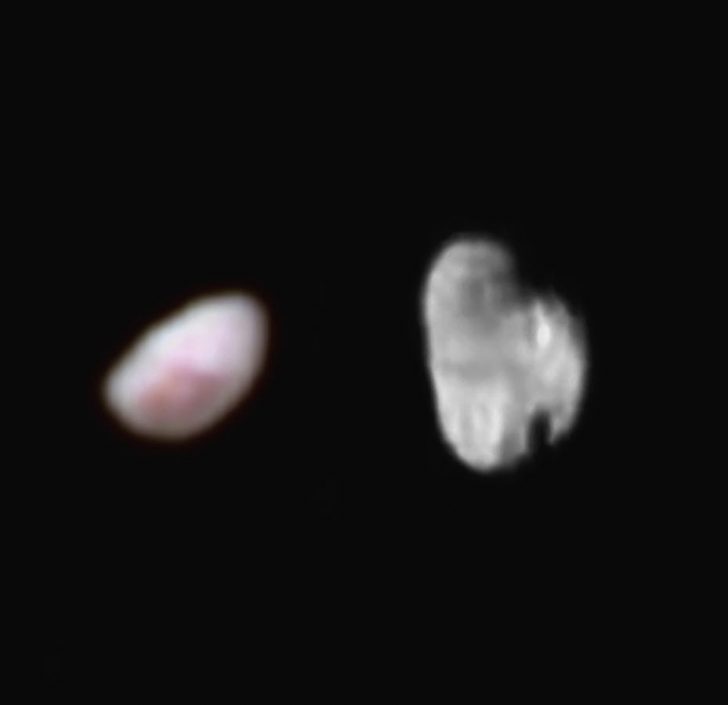 While Pluto’s largest moon Charon has grabbed most of the lunar spotlight, two of Pluto’s smaller and lesser-known satellites are coming into focus via new images from the New Horizons spacecraft. 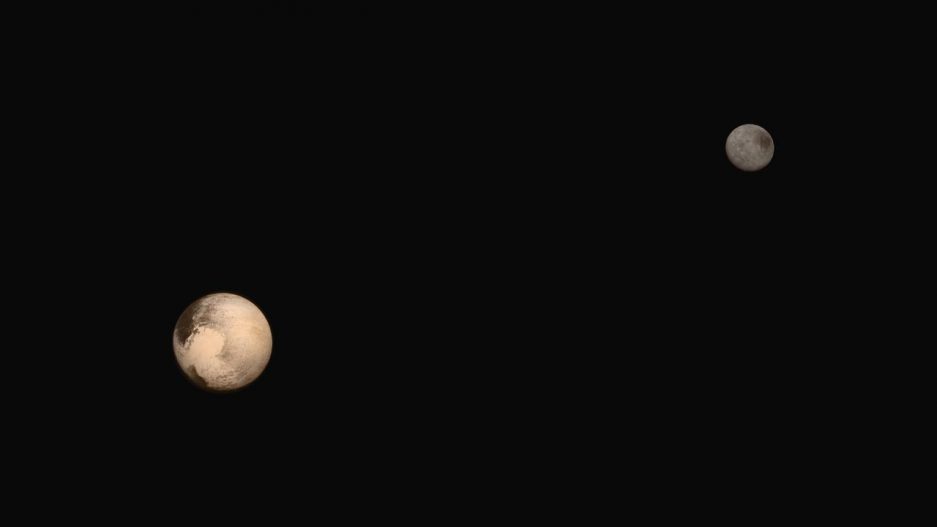 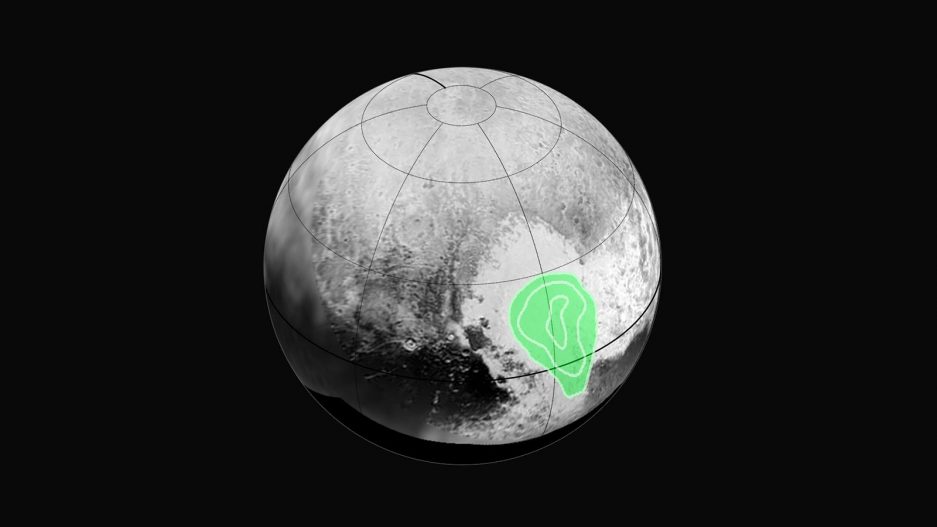 Peering closely at the “heart of Pluto,” in the western half of what mission scientists have informally named Tombaugh Regio (Tombaugh Region), New Horizons’ Ralph instrument revealed evidence of carbon monoxide ice. The contours indicate that the concentration of frozen carbon monoxide increases towards the center of the “bull’s eye.” 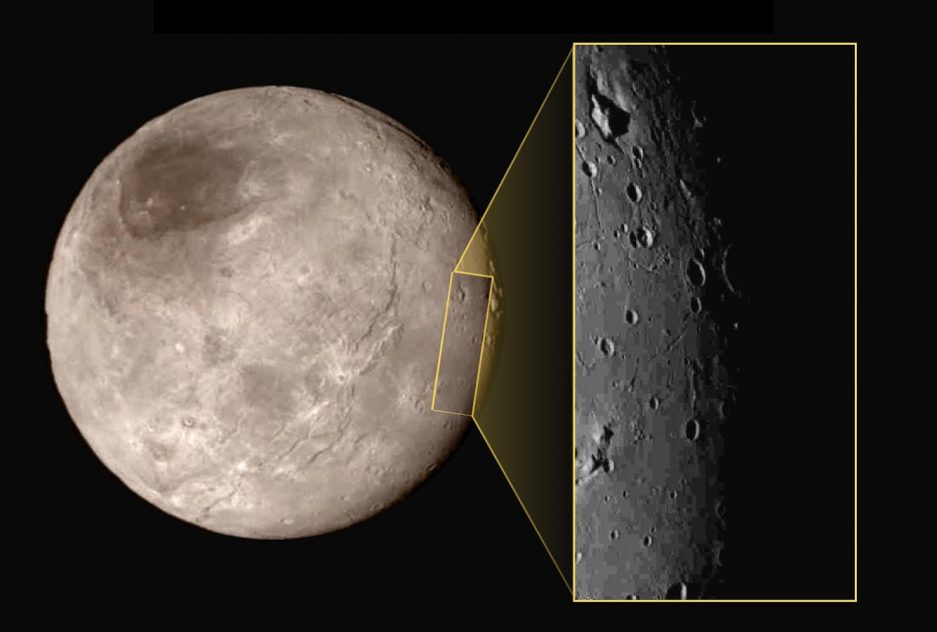 This new image of an area on Pluto's largest moon Charon has a captivating feature—a depression with a peak in the middle, shown here in the upper left corner of the inset.

1. It took a really, really long time for the New Horizons mission to bear fruits.

“Trying to explore planets is an incredibly difficult thing to do,” Pitts explains, and luckily the United States has the tech and the tools to go explore. It’s taken so long because even the fastest spaceship we have — which traveled at 36,000 miles per hour for this mission — took an eternity, or what seemed like one, to reach Pluto, some 3.6 billon miles away from Earth. Overall, it’s taken eight years since the mission began in 2007.

2. Years ago, scientists decided that not enough was known about Pluto to continue to consider it a planet in the Solar System. Pitts thinks that as more information becomes available, it should rejoin the celestial pantheon.

“History gives us pieces of information,” says Pitts. Originally, he explains, Pluto was not considered a member of the Solar System at all. There wasn’t enough known about it when it was first discovered. As time went on, more information became available, and it became necessary to reclassify things. (Pluto was considered a planet, and then its status was changed to a dwarf planet in 2003.)

Now, as scientists gather and reveal more information from the New Horizons mission, Pitts says, it may become necessary to again reclassify what a planet is.

There are three or so major criteria astronomers use to decide if a planet is, well, a planet. Does Pluto have enough mass to shape itself into a sphere? Yes, says Pitts. Has it cleared its orbit of other material? Again, yes. (NASA cites that as the original reason Pluto was changed to a “dwarf planet” — a larger object had been spotted beyond it.) Does Pluto revolve around the Sun? Yeah, says Pitts. There are other properties that determine a planet’s planetness, and many of Pluto’s aren’t yet known, but based on those criteria, Pitts believes Pluto should be “grandfathered” in as a planet.

Of course, he mentions, there is political intrigue surrounding the debate as well.

3. As director of the Fels Planetarium, Pitts intends to incorporate these pictures of Pluto into his daily planetarium show.

Indeed, Pitts says, he plans to include these new images, and any to come afterward, into his live planetarium show. But will he include Pluto as a planet? “That remains to be seen,” Pitts says. He adds that only one gigabit (not to be confused with the much larger gigabyte) of data has so far been downloaded from the New Horizons mission.

4. There’s a distinct heart-like shape in the Pluto picture, on the bottom right corner. It’s also lighter than the other parts of the picture. But Pitts says he has no idea what it means.

But he does know what it could mean. Though scientists, including himself, don’t have enough information to discern what the shape is, Pitts says it could be a sign of recent geological activity. “What’s recent, 100 million years?” he jokes, but he does say that there have been surprising geological processes detected on Mars, and the same could be said for Pluto. That lighter area, Pitts adds, could be the sign of relatively young geological movements.

5. This is the highest-resolution photo ever taken of Pluto.

The newly released pictures of Pluto are the best quality pictures yet. NASA has taken much better images of Mars, and of comets such as 61p, which is being examined right now, because these are much closer to Earth and way easier to get to, Pitts adds. However, in terms of Pluto, Hubble’s images fall quite short in comparison.

6. Though Pluto doesn’t have any direct effect on Earth, the technology used to explore it does.

“Why should we care about something billions of miles away?” I ask Pitts. “There’s nothing going on there that would have any direct effect on Earth; Pluto’s been around for some three billion years and hasn’t ever had an effect,” Pitts says. “Astronomers before 1930 didn’t even count Pluto in discussions about the Solar System,” Pitts says.

So, again, why should anyone care?

Because, says Pitts, the technology currently being used to explore Pluto could have a huge effect on everyday life on Earth later on. “The skills and technology adds to our body of knowledge, and eventually makes its way into our everyday lives.”

7. Pluto is one heck of a rocky and icy planet. Icier than even Pitts expected.

What the New Horizon scientists discovered about Pluto from these images is that it’s incredibly icy on the surface, Pitts says. Icier than even he originally expected. Pluto also has a thin atmosphere comprised mostly of methane, which in combination with the sun’s ultraviolet rays and things called “tholins” — which deposit on the surface — gives Pluto its slightly reddish, earthy color. However, Pitts says, he can’t yet determine the percentages of the materials Pluto is made up of.

He adds that Pluto’s several moons are in the discussion as well, especially Charon, the biggest moon, which he says is not much smaller than Pluto itself. Earth’s moon, by comparison, is around a quarter of the size of the Earth. Many of the moons are also expected to be icy bodies, Pitts notes.

8. We can anticipate more pictures soon enough, and likely every few weeks.

Pitts believes that subsequent images of Pluto will come in batches every few weeks as more are taken. “It’s a convoluted process,” he says. A single transmit can take up to eight hours. Images are sent through space to radio dishes on Earth, which then boost the data to communications satellites back in space, and finally down to the Goddard Space Flight Center near Washington, D.C. The images are then examined by NASA and given to the Applied Physics laboratory at Johns Hopkins University, whose scientists have the lead on this particular mission, Pitts says. Beam ’em down, Scotty!

9. Pitts thinks NASA should explore even further beyond Pluto.

Pitts thinks NASA should go beyond Pluto and into the Kuiper Belt to explore the many bodies that exist there. Pluto itself is considered a part of the belt. “I also think NASA should explore the icy moons of Jupiter and Saturn,” Pitts adds. Pitts would like to see NASA get ice penetrators and break through the massive bodies of ice on those two planets and explore the biological possibilities there. It’s possible that they’re not too different from the deepest parts of Earth’s oceans, where marine life exists. “Let’s go see,” Pitts invites.

“Not only am I excited about the new data, but also about the possibilities that come with a much larger body of knowledge and with advanced tools and technology,” Pitts concludes.