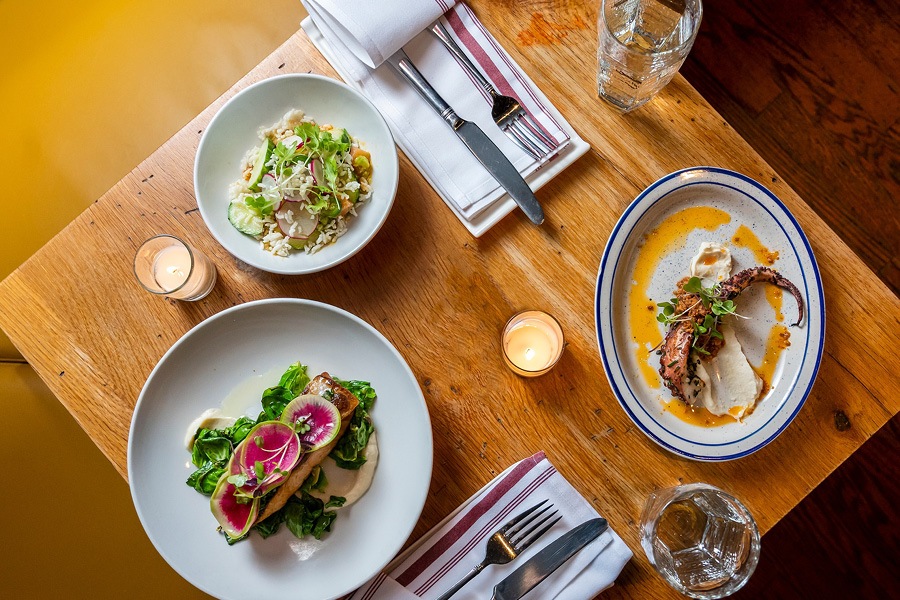 Courtesy of The Twisted Tail

Things feel weird here at Foobooz HQ. The holidays have come and gone. All the parties and celebrations, the last-minute pop-ups and morning-after brunches, are done. While, traditionally, these few weeks between New Year’s Eve and Valentine’s Day have been a quiet time of rebuilding and calm in the restaurant calendar, now that quiet feels a little haunted. With the ongoing impacts of the pandemic, the spike in Omicron infections, all the losses already suffered and the uncertainty over what comes next, every day feels like a held breath.

And yet, the days go on. News happens. We’ve got some new vax rules in place starting today, a blindfolded dinner, jerky news, a David Bowie tribute and a new chef at one of the oldest kitchens in the city.

But let’s kick things off with some good news — and the conclusion to a story that’s been months in the making. For that, we’ll start our first Monday Round-Up of 2022 down in South Philly with some glad tidings from the Pennsylvania Liquor Control Board …

Forever ago (okay, back in May), we got the bad news that the original Sabrina’s Café location in the Italian Market was shutting down. The O.G. Sabrina’s had been operating on Christian Street for something like 20 years, spawned four additional locations, and been instrumental in the brunch-ification of Philly’s restaurant scene. It was a big deal.

That closure, though, came with a potential silver lining. Owner Robert De Abreu told the Passyunk Post that this wasn’t really the end. “We’re not saying goodbye to South Philadelphia, we’re saying see you soon in a larger space close by.”

And while yes, a LOT of restaurateurs say this kind of thing when they’re shutting down, turns out the Sabrina’s crew meant it because there’s now a liquor license pending for a new South Philly Sabrina’s going into the space at 2101 South Street. And if that address sounds familiar to you, that’s because it’s the former home of Honey’s Sit ‘N Eat — another legendary Philly brunch spot that went dark during the pandemic, though it is still up and running in another location in NoLibs.

So yeah, this whole thing is kind of a big, pandemic brunch-time shuffle. The Sabrina’s crew has made a couple of announcements about the new space on Instagram, but have only ever said they’re hoping for an opening this winter. The new license? That’s definitely a sign that things are moving in the right direction.

Chef Nantambu Chavis — who has already completed some kind of weird, Philly-centric, Big Names checklist by working for Stephen Starr, DiBruno Bros., the Schulson Collective AND Aramark — has a new gig. He’s now the man in charge of the kitchen at the Pen & Pencil Club, which is one of the oldest press clubs in the country and, at 130 years old, is one of the oldest bar/restaurants in Philly.

Due to COVID precautions and the increasing rates of infection, The Twisted Tail shut down in-person dining in the run-up to the holidays, switching over to a pop-up/takeout operation focusing on fried things (always a nice fallback).

But starting today, TTT is back to regular service, and they’re also going to be home to one of the stranger events I’ve seen lately: Dining in the Dark.

It is EXACTLY what it says it is: a blindfolded dinner, eaten in a dark, candlelit room. The gimmick here is that not being able to see what you’re eating heightens your other senses, making for a “unique” dining experience. There are three mystery menu options (“Green” for vegan, “Red” for meat and “Blue” for seafood), three courses each, with additional wine and cocktail pairings offered for an additional cost. Dining in the Dark is being held every Wednesday through March, and tickets are already sold out through the February 16th date.

So if you’re down, check out the details (and get your reservations) right here. Tickets will run you $80 per person. Booze is extra.

Finally, we here at Foobooz HQ are big David Bowie fans, so there was no way we were going to let this week’s News Round-Up come to an end without letting you know about the Trestle Inn’s all-vinyl go-go party celebrating the legacy of The Thin White Duke. On Friday, January 14th, they’ll be spinning all Bowie on vinyl, showing classic Bowie videos, serving $8 Young American sours and running happy hour specials ’til 8 p.m. There’s no cover but, as mentioned above, don’t forget that vax card.

The fun starts at 6 p.m. Be there or be square.