The pastry chef behind Cake Life's ornate creations will appear on the new season of Food Network's Best Baker in America. 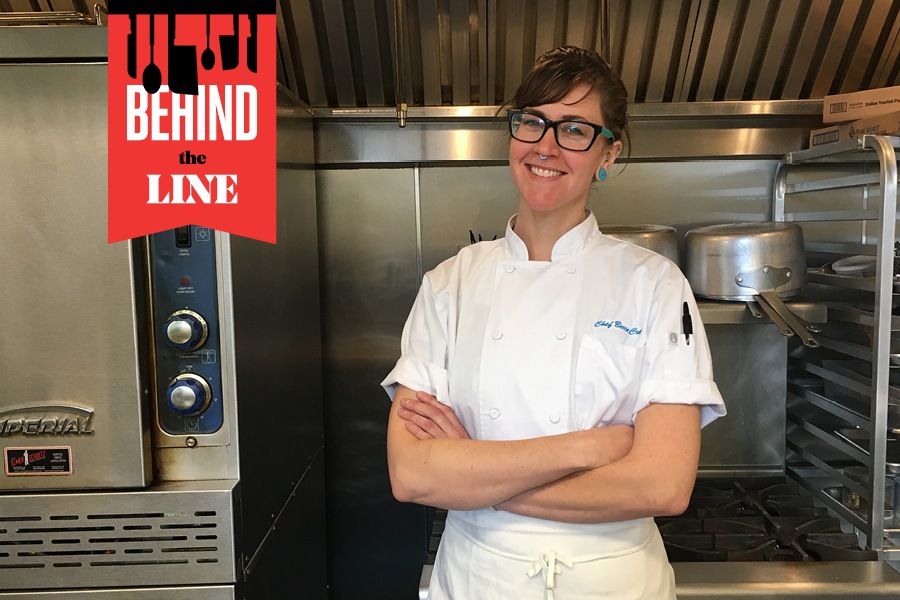 Cake Life Bake Shop’s Becca Craig went from a career in fine art to working behind the scenes at Bakery Boss, running the pastry program at Le Cheri, and creating Beyoncé’s iconic geode birthday cake last summer. Now, she’s taking her baking skills in front of the cameras as one of nine competing chefs on the second season of Food Network’s Best Baker in America. We sat down to chat with Becca at Cake Life’s Fishtown shop before the show’s premiere on Monday, May 7th at 9 p.m.

My full name is… Rebecca Craig.

I was born in… Burlington, Vermont, and I grew up in Lacet Township, New Jersey.

Now I live in… South Philly. I like that it’s full of cool businesses and lots of vastly different cultures. Most people there are very neighborly.

One of my favorite flavors is… Vanilla. I have a vanilla bean tattooed on my arm. I got it at Hunter Gatherer Tattoo in West Philly.

Before I started baking, I was… In the art world. I have a fine arts degree from Tyler. I studied CAD/CAM, painting, and drawing. Before I got into food, I was working for a high-end jeweler, turning sketches into 3-D models.

When I’m not working, I like to… Ride my motorcycle. She’s not currently running, so I’m working on that. I like to go camping, basically any weekend when it’s nice out. I’ve done rock climbing for the past 10 years, and I’m still painting.

My first baking company was called… Eat Me Desserts.

I started baking because… I had just moved, and my new roommate was a baker. One day, we were watching Ace of Cakes, and she said, “I always felt like I could do that,” and I was like, “Me too.” Within a week, we had started making random stuff. We built up a bit of a name and people started ordering from us. Later, the roommate left the business but I kept it up, baking out of The Black Sheep downtown. For a while, I was doing that at night and working a day job — but pretty soon, I quit to go to culinary school.

I learned pastry at… The Art Institute. I did their 18-month pastry and bread program. I was missing a huge chunk of information — the science of baking was very new to me. I needed to go back to school to really get the science and really understand it.

My first brush with reality TV came when… I had just started working at Kermit’s Bake Shoppe. I’d only been there for about a month, but my boss, Chad Durkin, had competed on Next Great Baker, hosted by Buddy Velastro from Cake Boss. Buddy had a new show, Bakery Boss, where he’d go around to these failing bakeries and revamp them. They were looking for an assistant for their culinary producer, and Chad recommended me.

Working behind the scenes on a food reality show was… Nuts. Every five days or so, we would change locations. We would show up, go shopping, and find some kind of commercial kitchen — a VFW hall, a school, whatever random spaces we could find — and then bake for 18 hours a day for two days straight. We would have one or two production assistants, but they never knew anything about baking. We were making the new baked goods for the revamped version of the bakery, and we’d just knock shit out for hours on end.

I have sense of which shows are real and which are fake because… The Cake Life owners [Lily Fischer and Nima Etemadi] have been on Cupcake Wars, and I know how much they manipulate. Top Chef seems very real to me. Buddy’s shows seem not real to me because I was behind the scenes — I can see the cues and tell what’s set up. The Great British Bake-Off, I love. It looks really real — there’s scripting, but I don’t care about that. My gut feeling is that that’s legit. I love that show.

I quit the reality TV game because… Buddy Velastro asked me if I wanted to open a Carlo’s Bakery downtown — it’s a franchise, but he opens each one. I was torn, because I knew he would financially set me up well, but it would be very much a cut-and-paste copy of the original store. That night, a chef instructor from my school who was friends with Pierre Calmels let me know that he was looking for a new pastry chef at Le Cheri, which he’d just opened in Rittenhouse. To me, that was more interesting. I could learn, grow, and experiment there.

One of the most elaborate desserts I ever made was… Croquembouche. Every Christmas at Le Cheri, we would make these classic French desserts to sell during the holidays. Croquembouche are definitely the biggest pain in the butt because you have to make them the day of, essentially, because there’s so much moisture in the air — they’re cream-filled profiteroles stacked together with hard sugar, so there’s this hot and cold issue. You want the cream to stay cold, but the caramel will absorb all the moisture in the fridge and start melting. That was a huge headache — they’re pretty, though.

I came to Cake Life because… I was burnt out working 18-hour days at Le Cheri, so I was ready for something new. I had interned for Cake Life a few years before while I was in school. Lily was having a baby, and they knew they were coming into this space [in Fishtown] in the near future, and she needed someone to do cakes.

A job I almost took was… In a lab at Tastykake. I don’t like all that fake food, but I love the science, which would have been amazing to learn.

At Cake Life, I’m in charge of… Anything that’s decorated. We have a pastry team — they make the croissants, cookies, and other non-cake desserts we sell — and a cake team. When I started a year and a half ago, I had one person working with me, and now I manage four staffers just working on cakes.

The epic black-and-gold geode birthday cake that you made for Beyoncé cost… $3,500. They ordered a whole bunch of other cakes and cookies on top of that, but with that kind of showpiece, it’s not even about the cost of the cake. It’s about the labor and time that goes into placing every one of those sugar crystals and hand-painting it.

Beyoncé’s feedback was… Really positive. After the Made in America Festival [where Bey celebrated her birthday last year], her guy called the shop and talked to Lily. He said, “I work with Beyoncé, and she asked me to call you and tell you that she really loved her cakes.” Which she really didn’t have to do. Our regular customers don’t do shit like that.

Best Baker in America called me because… They actually called Lily first, but she’s over going on reality TV. I’m not really an in-front-of-the-camera kind of person, but Lily encouraged me to do it. She’s now calling herself the Momager.

To get on the show, I had to… Do about five different Skype interviews with various staffers and producers. I had to make a cake in six hours, so I made one with a raspberry bergamot flavor — it was three tiers, with the middle tier exaggerated and draped in fondant that was hand painted with florals. The top and bottom tiers were semi-naked with pink tones, and I made little rice paper cutouts in gold and white accent colors and added raspberries, too. Then I had to do a plated dessert. They asked me to do meringue, so I made a baked meringue shell with a lemon sabayon, a thyme gelée, and poppyseed tuile.

The hardest thing about competing on Best Baker in America was… Timing. That’s what I was worried about going into it, particularly with the shorter challenges. Once I hit two hours, I’m good — it’s the hour-and-a-half challenges, I’m always just under being complete. There was definitely some drama there for me for sure.

I’m going to celebrate the premiere on May 7th at… Six Feet Under, where my sister is the manager. We’ll do a premiere party there with anybody and everybody who wants to see me be embarrassed.

You might see me on… Chopped, which just called last week. I think they’re doing a chocolate and pastry episode. Nothing’s confirmed yet — we’ll see.

I’m glad I decided to compete on Best Baker in America because… It’s definitely a personal challenge. I had to do it and see what happens, because you’ll never know what’s on the other side of something big like that if you’re scared of it.