The odds are that Jalen Hurts will remain the Eagles quarterback in 2022. 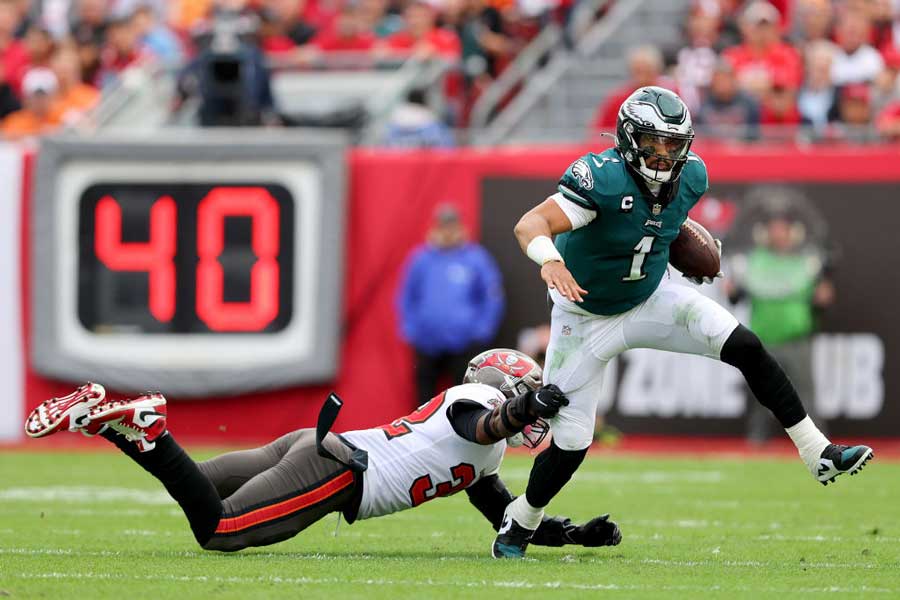 Jalen Hurts breaks a tackle against Mike Edwards during the second quarter in the NFC Wild Card Playoff game at Raymond James Stadium on January 16, 2022. / Photograph by Michael Reaves / Stringer via Getty Images

On January 19th, the Eagles are saying that Jalen Hurts will be the their quarterback in the 2022 season — but perhaps it’s more accurate to say that that’s the plan at this particular snapshot in time.

“Jalen knows where he stands with us,” head coach Nick Sirianni said at his season-ending press conference alongside general manager Howie Roseman. “He knows he’s our quarterback.”

Roseman also confirmed that Hurts will be the starter, offering up a simple “yes” when asked about his mindset regarding Hurts remaining at the controls moving into 2022.

“I think for us we have to do whatever we can to continue to help him develop,” Roseman surmised. “How do we do that? By surrounding him with really good players. Players continue to grow. That’s a huge part of developing. How they are in their second year is not how they’re going to be in your four, five, six, and seven. They are also products of the people around him. That’s on us to continue to build this team.”

Roseman is savvy enough to never slam the door completely, however, because as unlikely as pie-in-the-sky scenarios like Russell Wilson and Deshaun Watson might seem for the Eagles right now, the NFL is fluid.

Later in what was about a 35-minute session Roseman was able to slip in: “It’s our job to listen to everything and to see if there are ways to improve our team.”

Bookmark that if you’re playing along.

For now, though, the Eagles were pleased with Hurts’s incremental development throughout a season in which he completed 61.3% of his passes (up from 52% as a rookie) for 3,144 yards, 16 touchdowns, nine interceptions, and a passer rating of 87.2.

Hurts also ran for a team- and NFL-quarterback-high of 784 yards and 10 touchdowns, at an impressive 5.9 yards per clip despite dealing with an ankle injury since late November.

“Talk about Jalen and the growth he had, really (a) first-year starter, second-year player, leading this team to the playoffs, tremendously impressed by his work ethic, his leadership,” Roseman offered. “Last time [reporters and I] talked was during camp and we said we wanted to see him take the bull by the horns, and he certainly did that.”

“We’ve seen so many things that he got better at,” said Sirianni. “First and foremost, Jalen and the football character he has, the desire and the want-to of how badly this guy wants to be an elite, elite, elite player in this league.”

The coach then praised his assistants who helped bring along Hurts.

“Then you take into account Shane Steichen, who’s a great offensive coordinator and Brian Johnson, a phenomenal quarterback coach, and our offensive staff, doing everything they need to do to get Jalen ready to play, a lot of factors went into why Jalen got better as a passer, starting with Jalen first,” Sirianni explained.

“When he didn’t have that ability to run as effectively with the ankle, three of his last four games, he played over 100 quarterback rating,” said Sirianni. “We saw him develop in the sense where earlier in the year when he had to extend a play, it was a run. Later in the year, we just continued to get better in our scramble drills, he became a passer when we extended plays, and that really helped us down the stretch.”

And the final result is Hurts is the guy, for now at least.

The worst-case scenario for Hurts — playing poorly and subsequently written off — was avoided, and now the Eagles are comfortable, even if they’re not willing to slam any doors.

“You know where you stand with a coaching staff because you communicate, and you talk over and over and over and over again,” Sirianni said. “So, Jalen knows where he stands with us. I thought he did a great job getting better throughout the year, so there’s no secrets there, he knows he’s our guy.”