Eagles vs. Bucs Wild-Card Weekend: By the Numbers

Third downs could be the difference in Sunday's wild-card matchup between the Eagles and Tampa Bay. 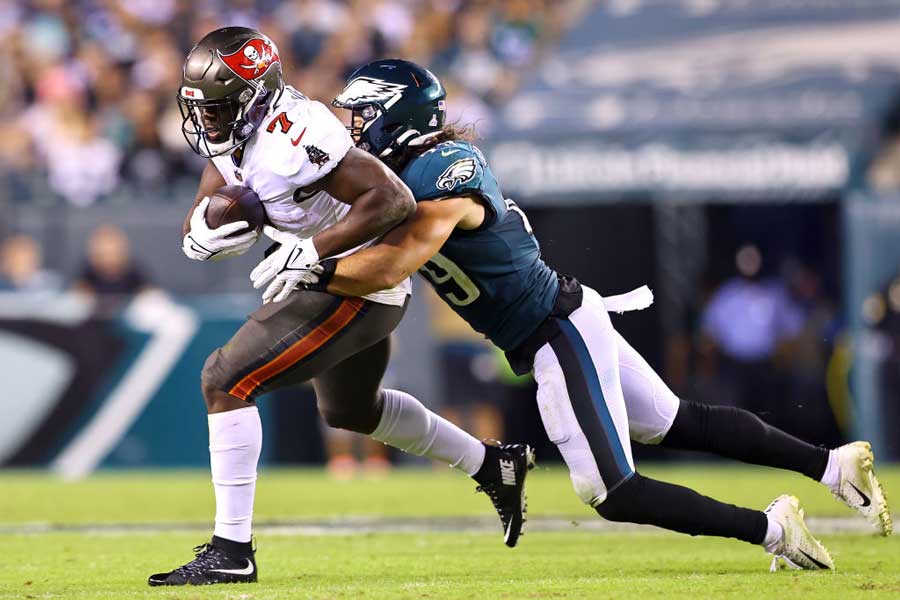 Alex Singleton tackles running back Leonard Fournette of the Tampa Bay Buccaneers in the third quarter at Lincoln Financial Field on October 14, 2021. / Photograph by Mitchell Leff / Stringer via Getty Images

The last time the Eagles faced the Tampa Bay Bucs was in Week 6’s Thursday night game when Jonathan Gannon’s defense still was handing out first-quarter points like celebration cigars.

The Eagles gave up an NFL-high of 48 first-quarter points in their first six games, including 14 that night at the Linc. Tom Brady engineered a pair of game-opening 75-yard touchdown drives and the Bucs never really looked back, even if the scoreboard might’ve indicated otherwise.

Brady completed 11 of 12 passes for 121 yards and two touchdowns on those first two drives. He was fifth in the league in first-quarter passing during the regular season with a 109.5 rating, a 71.5 completion percentage, 12 TDs, and just 2 interceptions. The Bucs were tied for third in first-quarter scoring with 107 points, behind only the Cowboys and Chiefs, who put up 130.

After the loss to the Bucs, the Eagles’ defense began to offer a little more first-quarter resistance, allowing just 52 first-quarter points in their last 11 games, which was the 13th most in the league. That said, just two of those last 11 games were against teams that finished higher than 17th in scoring.